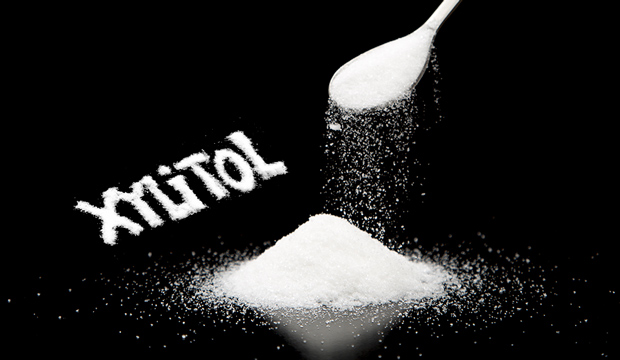 The sweetener xylitol seems to be increasing in popularity amongst consumer demand for zero calorie sweeteners. The American Academy of Pediatric Dentistry supports the use of xylitol sweetener as therapeutic for oral health, and manufacturers label the sweetener as “all natural” and safe for diabetic consumption.

Before you jump on the xylitol bandwagon… is xylitol sweetener really a safe alternative to sugar?

It turns out the answer isn’t clear-cut. You may want to avoid xylitol intake or other otherwise limit your daily consumption depending on your own health circumstances.

What is Xylitol Sweetener?

A type of sugar alcohol, xylitol is in a category known as polyols. Other sweeteners you may have heard of including sorbitol, mannitol, lactiol, and maltiol are also in this category. These sugar alcohols are created via a process known as hydrogenation − an unnatural process you are probably already aware of due to its prevalence amongst many processed foods.

Although xylitol is naturally found in small amounts in foods such as berries, cauliflower, plums, corn, and birch bark − commercially it is produced by the hydrogenation of xylose. Compounds that make up xylose are chemically swapped for oxygen and hydrogen, resulting in this low glycemic sweetener. However, the hydrogenation process requires a catalyst, so typically nickel is used. Nickel is a toxin linked to cancer.

The fact that xylitol is found in nature and can be derived from a natural product allows government authorities to loosely regulate labeling requirements.

While low on the glycemic index, there are conflicting reports on how xylitol sweetener affects blood glucose levels. Xylitol is not fully digested and absorbed within the human gastrointestinal tract, and up to 20% of this compound is excreted in urine. Only 50% of xylitol is absorbed by the small intestine. This leads to the concern of whether or not this sweetener can accumulate in the liver. Some researchers fear this could cause long term toxic consequences.

How has xylitol gained so much attention even though we do not yet fully understand how the sweetener is broken down and utilized by the body?

Unfortunately the makers of xylitol sweetener are very aggressive about promoting only the benefits.

The Benefits of Xylitol

Oral Health Benefits: Oral hygiene products are some of the most popular products that contain xylitol. These include toothpastes, mouthwash, chewing gums, and mints. Most of the research available shows that xylitol has therapeutic benefits for oral health.

Antimicrobial: Xylitol has antimicrobial properties against infectious bacteria such as pneumococcus. Strains of this bacteria cause pneumonia and meningitis. It is best understood that xylitol prevents growth of harmful bacteria by causing a toxic effect within the encapsulated bacterium.

Anti-Carcinogenic: Acetaldehyde is classified by the World Health Organization (WHO) as a highly toxic class 1 carcinogen. In other words, acetaldehyde has been sufficiently evidenced to be stigmatized as a cancer causing agent in humans.

Acetaldehyde is a product of alcohol fermentation and metabolism. When saliva (and it’s harmful bacteria) is mixed with the ethanol found in alcohol, a reaction occurs to produce acetaldehyde. Considering that alcohol is actually a yeast by-product, you can see how excessive consumption can contribute to Candida bacteria overgrowth, creating considerable acetaldehyde.

Xylitol has been shown to reduce the ability of microbes to produce acetaldehyde from ethanol by Candida during the fermentation process. For some strains of bacteria, xylitol may even completely eliminate this carcinogenic activity.

How can you reap anti-carcinogenic benefits from xylitol? Chewing xylitol sweetened gum throughout the day should provide you with the same concentration of xylitol that was used in studies.

Lung Cancer Therapy: Recently, a new study analyzed the effects that xylitol has on the morphology and stability of cancer cells. Researchers found that xylitol may actually have therapeutic benefits for treating lung cancer. In several lung cancer studies, xylitol was shown to inhibit cell proliferation and stimulate the natural process of autophagy (cell destruction). 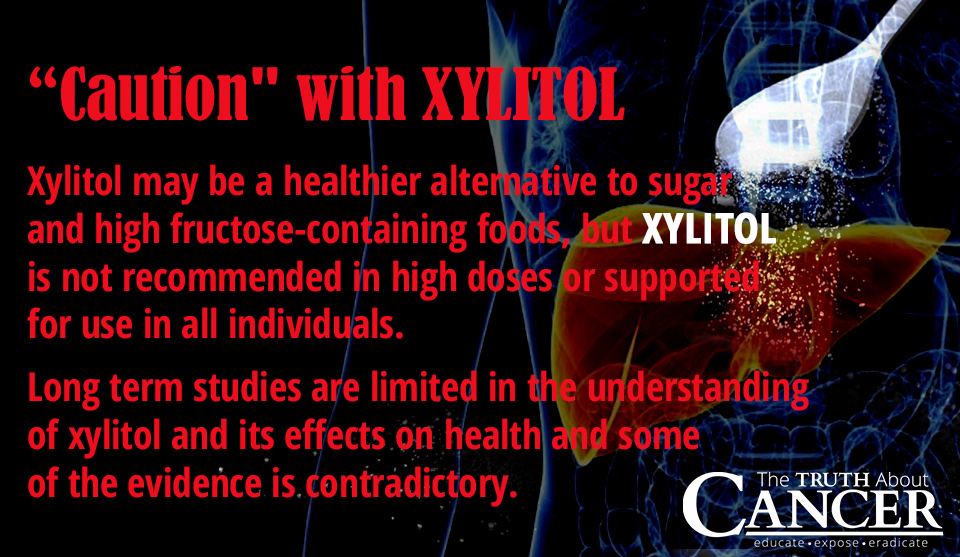 If xylitol sounds too good to be true, maybe it is. Xylitol is not recommended in high doses or supported for use in all individuals alike. Long term studies are limited in the understanding of xylitol and its effects on health and some of the evidence is contradictory.

Potential for Metabolic Disturbance: As previously mentioned, xylitol is not fully absorbed by the gastrointestinal (GI) tract. It may be possible that xylitol builds up in the liver and can potentially have toxic consequences when used in large quantities. Over time, this could lead to metabolic disturbances.

Gastrointestinal Upset: The majority of xylitol is passed into the colon and fermented by bacteria. The intestinal microflora use the sweetener to create fatty acids as well as hydrogen and methane gas.

Consequently, these gases are associated with flatulence, abdominal cramping, bloating, and diarrhea. Data suggest that more than ten grams of xylitol sweetener daily can cause these GI symptoms. This amount could be easily consumed unknowingly due to its vast usage, often without adequate labeling.

Individuals with gastrointestinal issues sensitive to fermentable sugars should limit − if not avoid − xylitol intake. People with irritable bowel syndrome, Crohn’s disease, and any dysfunction of the GI tract may experience an increase of GI disturbances exacerbated by xylitol.

Malabsorption: What foods you consume with xylitol and various nutritional components of foods containing xylitol may affect your ability to absorb each individual component. Ingesting sugar alcohols can limit the ability for nutrients such as fats and carbs to be metabolized adequately. Clinical trials have also shown that consumption of sweeteners such as xylitol can lead to appetite dysregulation resulting in a lack of satiety and ultimately the increase in fat consumption.

Drug Contraindications: Sugar alcohols as a group can interact with pharmaceutical drugs. Individuals with type-2 diabetes who take drugs prescribed for the management of weight should especially limit xylitol consumption.

Caution for Pet Owners: Many stories and occasions of dogs ingesting xylitol-containing foods have taught pet owners a harsh lesson − xylitol kills pets. A few cookies, a pack of gum, or even an English muffin can contain a high enough concentration of xylitol to cause life threatening hypoglycemia (low blood sugar) and liver failure in your favorite furry companion.

Notes of Caution About Xylitol

If you want to receive the antimicrobial benefits of xylitol, it is recommended to consume products containing only pure xylitol without any other added sweeteners or in combination with foods containing sweetener. The presence of other sugars and sugar substitutes with xylitol inhibits its ability to degrade and prevent bacteria growth.

Of note too is that Xylitol is quite commonly produced from corn. This is usually GMO corn and/or corn from China, so you will want to be mindful about that. The alternative is xylitol produced from “North American hardwood” (birch trees), although this is generally more expensive.

Concerned about sugar and cancer? Xylitol sweetener may be a healthier alternative to health-damaging sugar and sweeteners such as aspartame, but exercise caution and, if appropriate for you, consume in small doses.