You are here: Home / Cancer Prevention / Discover the Healing (and Detoxifying) Power of Bentonite Clay! 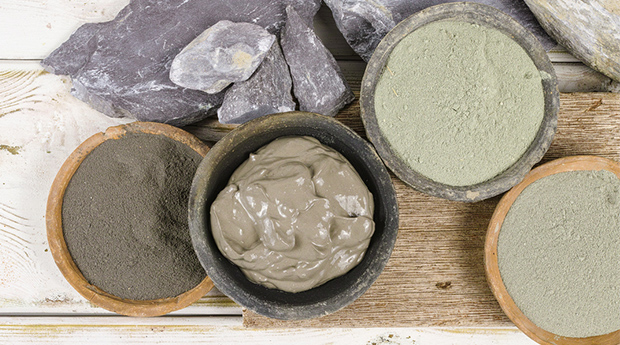 I don’t know about you, but when I was a kid, I always had my hands in the mud. It just felt good to be connected to the earth in that way. As it turns out, there really is something to that spontaneous impulse most young children to “get dirty” when they play outside. Research over the last ten years has proven what us kids knew back then and what native peoples have known for centuries… the awesome anti-viral, anti-bacterial, heavy metal detoxifying effects of clay. And in particular, a type of clay I want to share about today − bentonite clay.

What is Bentonite Clay?

The term “bentonite” references the area where most of this kind of healing clay currently comes from: The Cretaceous Benton Shale in the southeastern area of Wyoming. Other geographical locations where bentonite-like clay occur are: Montmorillon, France (called “Montmorillonite” clay), as well as in Italy, Canada, Australia, and parts of Central and South America.

The way that these kinds of clays are formed is part of what makes them so healing. They are composites of volcano ash and are formed when volcanoes spew molten earth from the planet’s core. In fact, it is this “birthing process” out of extreme heat that creates the highly-charged particles and unique high-pH value that allows these clays to bind to toxins.

Bentonite Clay Gets Rid of Bacteria, Viruses, and Heavy Metals

First of all, clay is a powerful antibacterial agent. Being highly charged with negative ions, it will naturally bond with substances that have a high positive charge, such as viruses and bacteria. In the case of viruses such as E-Coli, Staphylococcus Aureus, MRSA, and others, clay molecules literally surround the viruses, suffocating them and preventing them from reproducing or getting fuel. Thus, the viruses die off and are carried out of the body through the body’s detoxification pathways.

A January 2017 clinical trial sponsored by the U.S. Centers for Disease Control and Prevention (CDC) used a calcium montmorillonite clay in the treatment of aflatoxin B1 for infected families in rural Kenya. Aflatoxin is a very potent form of fungus (i.e. mycotoxin). It is typically found in grains such as corn and cottonseed meal as well as in stored peanuts and can cause severe immune-suppression. The researchers in Kenya reported that the oral administration of this kind of clay was “effective, acceptable and palatable” for ridding the body of aflatoxin.

And just recently, researchers at the University of British Columbia (UBC) found that the naturally-occurring clay that the Heiltsuk First Nation people around the Kisameet Bay, BC area had been using for generations was more effective for curtailing certain bacterial infections than antibiotics. In particular, this form of bentonite clay was highly effective on “ESKAPE” pathogens, including “Enterococcus faecium, Staphylococcus aureus, Klebsiella pneumoniae, Acinetobacter baumannii, Pseudomonas aeruginosa, and Enterobacter.”

According to the UBC report published in the 2016 edition of American Society for Microbiology’s mBio journal, these particular forms of bacterial infections comprise the majority of U.S. hospital-borne infections. And, they are often not able to be remedied by antibiotic drugs.

Another way that clay can be beneficial is as a powerful heavy metal detoxifier. Clay has the ability to bond with heavy metals such as mercury, cadmium, and lead. These metals are found in everyday household products, in the air, and even in some processed foods such as high fructose corn syrup. In the same way that bentonite clay can expel bacterial pathogens from the body, it does the same for toxins such as these. In the process it also lowers inflammation and increases immunity. Bentonite also contains vital healing minerals within it, such as magnesium, calcium, iron, and potassium.

4 Ways to Benefit from the Healing Powers of Clay

The best thing about healing with clay is its diversity. Not only can it be ingested to get the internal effects mentioned above, it can be applied topically as well. By putting it on your skin you can utilize its ability to heal skin-borne infections and conditions such as eczema and benefit from it as a beauty agent as well!

Here are four ways that you can take advantage of the healing power of betonite clay:

Finally, in order to get the most out of your healing clay, always use a natural, organic source that has NOT been heated. Research has confirmed that heating clay to 900 C (approx 1650 F) or above destroys its structure and its capabilities to bond with bacteria, heavy metals, and other toxins. In addition, if you use clay for detoxification, be sure to help out your liver and other detoxification organs by giving them a boost as well so that they can effectively eliminate the toxins.

←
Previous
The Health Benefits of Kale: 9 Reasons to Love this Leafy Green Superfood
→
Next
How to Keep Circulating Tumor Cells Under Control (video)