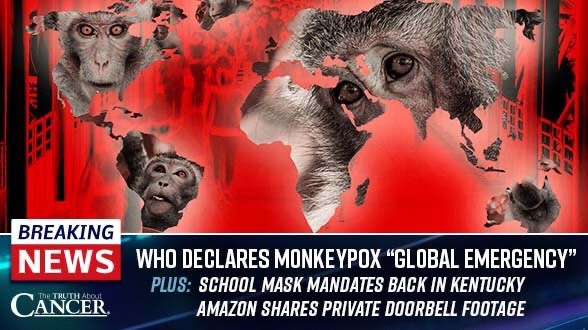 Sometimes, there’s so much news that it can be hard to keep up. Our goal is to bring you all the information you need to stay informed and keep your family healthy and safe. We spend hours on everything we publish to ensure accuracy so that you can get the full story. Below are a few important news stories from the past few days that we think are important. We’ll follow up on these as more information becomes available.

In the meantime, here’s what you need to know…

The World Health Organization (WHO) recently declared monkeypox a Public Health Emergency of International Concern (PHEIC). The WHO had convened an expert panel to advise whether or not monkeypox should be labeled as a global emergency. The panel was split 9-6 against declaring a PHEIC.

WHO Director Tedros Adhanom Ghebreyesus went against the opinion of his own advisory panel, moving unilaterally to declare the PHEIC without explanation. Though the committee does not formally vote, a survey of the members revealed that nine thought a PHEIC should not be declared and six supported a declaration.

Tedros said in a news conference called to announce the decision: “Nine and six is very, very close. Since the role of the committee is to advise, I then had to act as a tie-breaker.”

Apparently, 9 and 6 are essentially the same number. To put that into perspective, no U.S. president has won more than 58.77% of the popular vote in any election since 1976. In fact, the last 12 presidential elections have seen the winner take an average of 50.43% of the popular vote.

When it comes to the WHO, 60-40 is a tie. The PHEIC declaration will now activate an agreement between 196 countries to detect, assess, report, and respond to monkeypox in a coordinated global effort.

Remember how well that worked out last time?

It seems that school mask mandates are making a comeback as several counties have made plans to force teachers and students to don the face coverings. Jefferson County – home of Louisville and Kentucky’s largest school district – is now requiring universal masking on all school property.

This will impact students of all ages, teachers, staff, maintenance crews, parents, and anyone else who steps foot on school grounds. District officials have said that the masks will be required regardless of vaccination status, and that school buses will be included in the mandate.

A number of carefully done studies during previous flu seasons demonstrated that masks, of any kind, had never prevented the spread of the virus among the public. In fact, some very good studies suggested that the masks actually spread the virus by giving people a false sense of security and other factors, such as the observation that people were constantly breaking sterile technique by touching their mask, improper removal and by leakage of infectious aerosols around the edges of the mask.

Mask requirements are especially detrimental to young children, who rely more heavily on facial cues for social and emotional development. If you thought the crazy rules were over, you thought wrong.

Amazon Has Shared Ring Doorbell Footage (Without Consent or Warrants)

Amazon recently admitted that the company has turned over footage from its Ring doorbell cameras to law enforcement agencies – without a warrant and without the knowledge or consent of the owner.

The revelation came in a letter Amazon sent to Sen. Ed Markey on July 1 after the lawmaker questioned the video doorbell’s surveillance practices in June. Markey made the letter public a few weeks later.

Ring, which Amazon bought in 2018, has repeatedly said that police can’t view recordings unless clips are posted publicly or shared directly with police, though that doesn’t apply to police subpoenas and emergency requests. While the company’s policy has said this information can be shared without a user’s consent, this letter is the first time the company has confirmed that it has handed over this information.

Ring doorbells, in particular, raise privacy concerns because of their popularity, Amazon’s agreements with police, and Amazon’s growing technological capabilities. In 2020, Ring responded to a letter from five senators and revealed that four employees improperly accessed Ring video data.

We’ve seen that tech companies can access microphones and cameras in our phones, computers, televisions, cars, security cameras, and even virtual assistants like Alexa and Google Home. Apparently, that wasn’t enough.

Now they’ve got your doorbell spying on you.