You are here: Home / Featured Articles / Child Diabetes More Than Doubles After Lockdowns 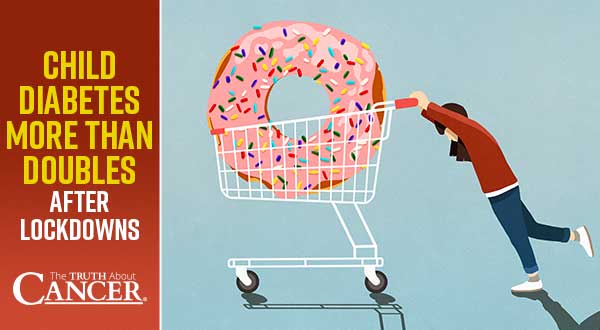 As the casualty count from lockdowns and other over-the-top COVID-19 response measures continues to climb, it seems that children are yet again bearing the brunt of government incompetence. According to new research, the incidence of type 2 diabetes in children has more than doubled since the pandemic began.

Findings from the two separate retrospective chart reviews — one conducted in Washington, DC, and the other in Baton Rouge, Louisiana — were presented June 25 at the virtual American Diabetes Association (ADA) 81st Scientific Sessions.

Although the two studies differed somewhat in the clinical parameters examined, both revealed a similar doubling of the rates of hospitalizations for type 2 diabetes among youth during 2020 compared with the same time period in 2019, as well as greater severity of metabolic disturbance.

Type 2 diabetes is the most common form of the disease, caused by poor diet and exercise, implicating the lifestyle of the “new normal” in the skyrocketing rates of diagnosis and hospitalization in our children.

In the pre-pandemic period, 18 (36%) diagnosed with type 2 diabetes required inpatient admission compared with 85 (60.3%) during the pandemic. At Children’s National Hospital in Washington, DC, youth with suspected new-onset type 2 diabetes aren’t typically hospitalized unless they have severe hyperglycemia, ketosis, or are unable to schedule urgent outpatient follow-up.

Dr. Lily Chao, interim medical diabetes director at Children’s Hospital Los Angeles, said she’s seen the same trend in her hospital, particularly in cases of ketoacidosis, a severe complication of diabetes that occurs when the body does not have enough insulin.

“Historically, in people with type 2 diabetes, the rates vary from 5 to 10% in our hospital,” said Chao. “In this past year, our rates went up to 20% of new type 2 diabetes cases presenting in that severe state.”

The proportions of youth with new-onset type 2 diabetes who presented in diabetic ketoacidosis (DKA) rose from 2 (4%) pre-pandemic to 33 (23.4%) during the pandemic. Presentation with hyperosmolar DKA rose from 0 to 13 (9.2%).

However, during the pandemic only five youth were actively infected with SARS‑CoV‑2 at the time of type 2 diabetes diagnosis among the 90 tested. According to researchers, this implies that the lifestyle imposed by tyrannical government mandates – NOT the virus itself – is once again at fault.

“Although we could not assess the cause of the increases in type 2 diabetes from our data, these disparities suggest that indirect effects of social distancing measures, including school closure and unemployment, are placing undue burden on underserved communities. Decreases in well-child care and fears of seeking medical care during the pandemic may have also contributed,” said the lead investigator of one of the studies, pediatric endocrinologist Brynn E. Marks.

Andrew Aparicio, a 17-year-old patient of Chao’s, said it was about a year ago when he started experiencing stomach cramps and fatigue. At first, he thought it could be coronavirus.

“I wasn’t eating. I would be sleeping most of the day and not doing anything,” Aparicio said. His father took him to the hospital, where he stayed for a week and was diagnosed with type 2 diabetes. Aparicio said the news came as a shock.

“I left the hospital pretty traumatized,” Aparicio said. “What happened to me really scared me.” Aparicio said he weighed around 257 pounds at the time, “Being stuck at home all day, I would just eat. COVID kind of messed me up.”

“Just the fact that this rate has more than doubled over the past year is… significant,” said Dr. Daniel Hsia of Pennington Biomedical Research Center in Baton Rouge. Children hospitalized in 2020 had more severe diabetes, with higher blood sugar and more dehydration, than children admitted in the prior year, he said.

“Our study reinforces the importance of maintaining a healthy lifestyle for children even under such difficult circumstances,” Hsia said in a statement.

Children and teens almost never got type 2 diabetes until recently, according to the CDC, which now says the condition is a growing problem among pediatric patients.

“Getting diabetes at this age is very different than getting diabetes as an adult,” said Chao. “The complications occur sooner. It is a much more progressive condition.”

Hsia says additional research is needed to understand the factors driving the increase in cases, but the lifestyle changes associated with the pandemic — including less physical activity and more screen time — could drive weight gain in children.

“The little weight changes and small amounts of weight gain can certainly tip the scale and cause someone to develop type 2 diabetes,” Hsia said.

We can break the troubling trend of childhood obesity and skyrocketing cases of diabetes by setting a better example for our children with healthy lifestyle choices.

After school activities were cancelled, gatherings were forbidden, and people were literally arrested for bringing their children to the playground. Remember Meridian, Idaho, when a mother of two was literally dragged away in handcuffs for letting her children exercise?

This pandemic is a farce, the response to which has been far more costly than the virus itself.

And our children are bearing the brunt of it.

←
Previous
7 Medicinal Mushrooms That Fight Cancer
→
Next
Prebiotics and Probiotics: Why You Need Both for a Healthy Gut