You are here: Home / Cancer Prevention / CoQ10 and Its Role Against Cancer 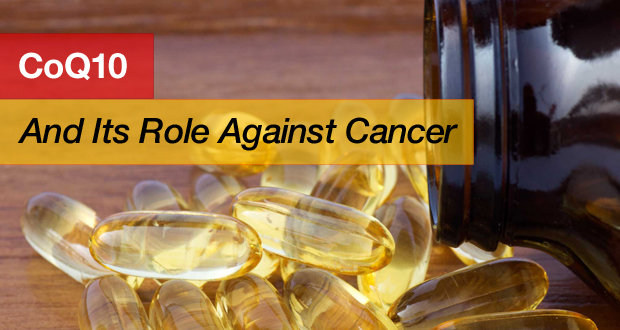 CoQ10 is also known as co-enzyme Q10, Q10, vitamin Q10, ubiquinone and ubidecarenone. It is a compound that is naturally produced by the body. The “Q10” simply refers to the group of chemicals that make up the co-enzyme.

CoQ10 is used by the body’s cells to produce the energy they need to grow and stay healthy. CoQ10 also consists of an antioxidant property that protects the cells from  harmful free radicals. Free radicals can cause damage to the DNA of a cell which is often linked to the cause of cancer. CoQ10, protects the body is from the harmful effects of free radicals; hence, reducing one’s risk of developing cancer.

CoQ10 is found in all of the body’s tissues but is more concentrated in the heart, liver, kidneys, pancreas and lungs. CoQ10 is also found in: anchovies, broccoli, beef, salmon, sardines, mackerel, soy oil and peanuts.

As a person gets older, the amount of CoQ10 tends to decrease due to a decline in production levels or a deficiency of vitamin B6. Vitamin B6 can be obtained from chickpeas, avocado, roast beef, fish, chicken breast, tomato and sunflower seeds.

CoQ10 was discovered in 1957, but researchers didn’t discover its benefits as an anti-cancer agent until 1961. Since then, numerous studies have been conducted to determine CoQ10’s role against cancer.

How does CoQ10 work against cancer?

During its first discovery in the 1960s, it was ascertained that patients suffering from myeloma, lymphoma and other types of cancer –  such as: head and neck, breast, lung, pancreas, colon, kidney and prostate –  had lower levels of CoQ10 in their blood. Studies suggest that CoQ10 can be used to help boost the immune system. As a result, CoQ10 became one of several adjuvant therapies for cancer. An adjuvant therapy is an auxillary treatment given after the primary treatment to augment the patient’s healing process.1 Since CoQ10 is a powerful antioxidant, it may be able to prevent the growth of cancer cells single-handedly.

There were some animal and laboratory studies conducted to test the effectiveness of CoQ10. Most of these laboratory studies aimed to identify the chemical structure and physiology of CoQ10 in the body. Based on animal studies, CoQ10 dramatically  improved the immune system; hence, enabling the body to fight certain types of infection, as well as cancer. Another animal study reveled that CoQ10 effectively  protect the heart muscle from cell damage caused by the anticancer drug called doxorubicin. Additional animal and laboratory studies determined that analogs of CoQ10  inhibited the growth of tumor cells. 2

Consequently, researchers investigated the effect of CoQ10 in human cancer patients. CoQ10 was tested as a protective agent among cancer patients who were taking the anticancer drug, doxorubicin. Doxorubicin is an anthracycline drug which is said to induce cardiac toxicity by interfering with the energy-generating biochemical reactions of the heart muscle’s mitochondria. The mitochondrion are considered to be the cell’s powerhouse, giving energy to the entire body system. Results showed that cardiac toxicity was lessened with CoQ10 supplementation.

Based on a study in Denmark, 32 women afflicted with breast cancer were given a nutritional supplement program consisting of vitamins, minerals, essential fatty acids and CoQ10 along with their primary treatment. Results of the study showed that the participants used fewer painkillers in their treatment and they didn’t lose weight. It was also reported that there were six patients who showed signs of tumor regression and all participants survived at least two years after their treatment. However, this study was not well-designed in that it didn’t have a comparison group. Therefore, it is not clearly understood whether the cause of tumor regression was as a result of the implementation of CoQ10. 3

Another study was performed in Canada to ascertain the effects of a combination of supplements, including CoQ10, among 90 women with breast cancer. The women in this study were given high doses of vitamins, minerals, and CoQ10 along with their standard treatment. When their condition was compared with 180 women who were not taking the high doses of combination supplements there was no significant statistical evidence pointing to the singular effectiveness of CoQ10 as an anti-cancer agent. 3  Nevertheless, the above human studies did suggest that CoQ10 plays an important role against cancer when combined with other supplements. 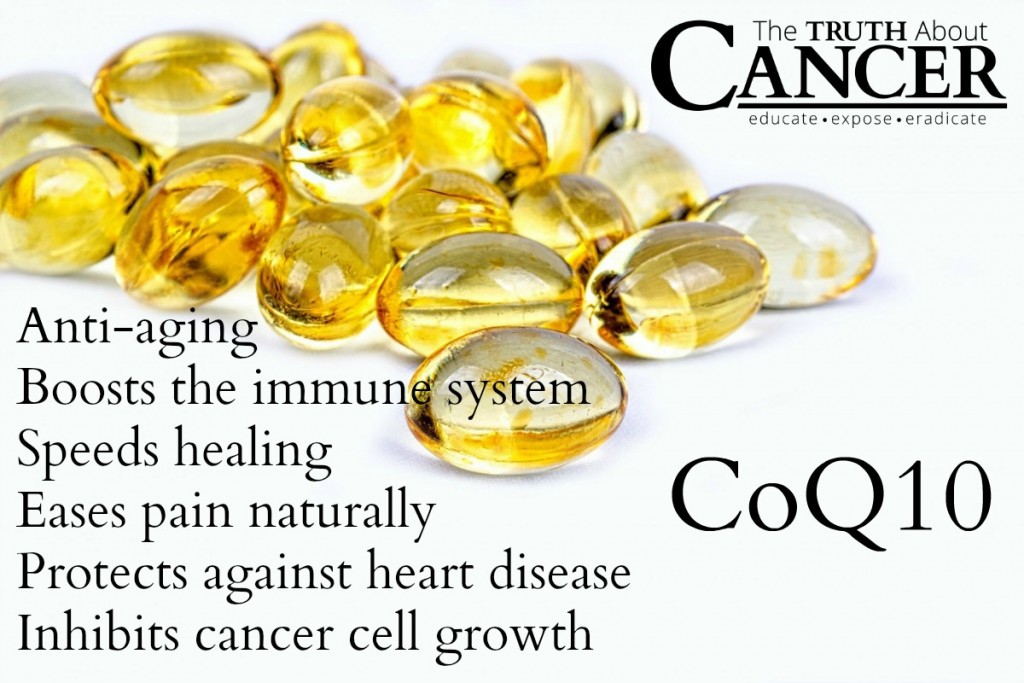 Other conditions treated by CoQ10

This powerful co-enzyme is not only good for fighting against cancer, but studies suggest that CoQ10, when given alone or combined with other therapies, can benefit your health in the following conditions:

Treats heart failure. Heart failure is a type of cardiovascular disease wherein the heart fails to pump blood normally resulting in the pooling of blood in various parts of the body, such as the lungs and legs. People with heart failure usually have low levels of CoQ10. Clinical studies documented that CoQ10 supplements are effective in reducing the accumulated fluid in your lungs and the swelling of your legs. Once these areas are improved, you can breathe easier and your exercise capacity will be increased. However, CoQ10 supplements should not be used to treat heart failure by itself. Ask your health care provider for possible treatment plans.

Aids in heart surgery. Studies suggest that CoQ10 may be given before heart surgery because it effectively strengthens the heart’s function and stabilizes the  heart beat. However, ask your health care provider’s advice before supplementing your treatment plan with  CoQ10.

Faster healing of gums. If you are experiencing gum problems such as swelling, redness, bleeding and pain, CoQ10 supplements may help because it is effective in gum tissue repair.

Other uses. Other studies suggest that CoQ10 may be successful in combating  HIV/AIDS by  boosting the immune system. People with HIV/AIDS are known to have weakened immune systems as a result of the AIDS virus. CoQ10 may also be used for the treatment of migraines, Parkinson’s disease and  male fertility.

How to take CoQ10 supplements

A child under 18 years of age is not advised to take CoQ10 supplements unless prescribed by a health care provider. Adults, on the other hand,  19 years of age and older are advised to take between 30 and 200 mg of CoQ10 daily. For better and faster absorption, take the soft gel forms instead of the capsule forms. Since CoQ10 is a fat soluble supplement, take it with meals containing minimal fat.

When taking CoQ10 supplements, you may experience these minor side effects: fatigue, nausea, dizziness, insomnia, rashes, light sensitivity, irritability, headache, heartburn and pain in the upper part of the abdomen. There are no serious side effects that have been recorded for the use of CoQ10 supplements but, to avoid the possibility of serious complications, consult your health care provider. CoQ10 supplements might not work well with certain drugs that can weaken the effects of CoQ10 supplements. Also CoQ10 might be contraindicated to persons taking blood thinner medications as well as pregnant women.