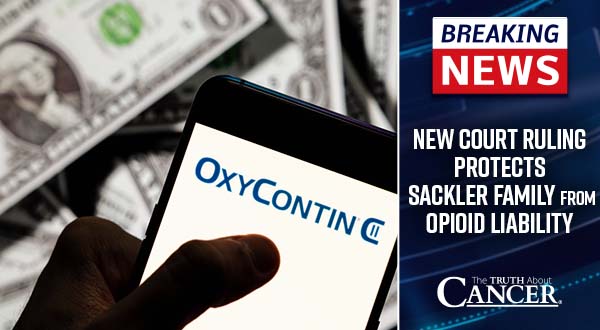 On Thursday, Judge Robert Drain of the U.S. Bankruptcy Court in White Plains, N.Y. issued a ruling that will protect the nefarious Sackler family from liability in the wake of the opioid epidemic. Under the bankruptcy agreement, Purdue Pharma will pay $4.3 billion to settle opioid lawsuits, and the Sackler family will relinquish control of the company.

The ruling will provide the most notorious drug pushers in history, whose company Purdue Pharma got the country hooked on OxyContin, with immunity from future lawsuits related to the opioid epidemic they helped create.

While the faceless company has pled guilty to criminal charges in one of the worst pharmaceutical scandals in American history, the Sackler family has managed to avoid criminal charges. With this week’s ruling, they’ll also avoid billions of dollars in liability.

Over the last 20 years, U.S. opioid overdose deaths have increased by more than 600%. Every day, about 130 Americans die from an opioid overdose. Right now, you are more likely to die from an accidental opioid overdose than a car accident. And the Sackler family has become increasingly wealthy as the death toll rises.

Judge Robert Drain noted that the Sackler family members who testified showed little remorse. “A forced apology is not really an apology,” he said. “And so we will live without one.”

Want proof,? Just read the deposition of Richard Sackler, who pretended for hours that he had no idea how much money he’d made or how the company operated.

The Sacklers had vowed to reject the settlement unless they were protected from future legal action, drawing fierce opposition from some states. Judge Drain said he had expected the Sacklers to make a larger contribution and that with litigation, it might have been achieved.

“This is a bitter result,” he said.

Purdue’s family owners collected more than $10 billion from the company between 2008 and 2017, about half of which went to taxes or was reinvested in the business. The bankruptcy plan’s approval means those family members can put behind them numerous lawsuits and investigations from state regulators and private lawsuits over their stewardship of Purdue.

The Sacklers are getting broad releases that extinguish civil litigation currently pending against them as well as lawsuits that could be brought in the future. This is especially concerning given the way in which the Sacklers extracted billions of dollars from the company, hiding their wealth in a complex web of subsidiaries and offshoot companies.

A review by The Associated Press reveals that the Sacklers’ wealth is shielded in a web of companies and trusts, some registered in offshore tax havens far from Purdue’s Connecticut headquarters. The complexity of those structures, coupled with their offshore reach, could affect the calculus for government lawyers as they weigh how to go after Purdue, including how to calibrate demands in settlement talks.

“The Sacklers allegedly moved significant money offshore, which potentially would make it harder for any judgment creditor to reach,” said Mark Chalos, a lawyer who represents counties and cities in our hometown of Nashville, Tennessee, in suits against opioids makers.

In Purdue’s 2007 plea agreement with federal prosecutors, it listed 215 companies under its corporate umbrella, but that list did not include a number of companies used to manage property and investments for family members or the trusts, some offshore, set up to administer their fortunes.

Some offshore entities “appear to have served as conduits for monies from Purdue,” a lawyer for New York’s attorney general wrote recently to the judge presiding over the state’s lawsuit.

The company also assembled a massive sales force dedicated to preaching the OxyContin gospel. In this twisted religion, chronic pain was “sin” and OxyContin was “the savior.” They proselytized day and night about the scourge of chronic pain, and the safety of opioids. They even developed a mantra:

“OxyContin is the drug to start with and stay with.”

Washington Attorney General Bob Ferguson and Connecticut Attorney General William Tong, the top law enforcement officer in Purdue’s home state, said they intend to challenge Judge Drain’s ruling in appellate court. Ferguson said the ruling “lets the Sacklers off the hook” in exchange for a fraction of the profits they have made from the opioid epidemic.

This order is insulting to victims of the opioid epidemic who had no voice in these proceedings—and must be appealed,” said Ferguson

Supporters of the ruling have contended that this is the only way to get at least some money back to victims. The argument is that continued litigation would erode the existing funds, ultimately hurting affected families.

For regular readers of our work, none of this will come as a surprise. A major pharmaceutical company illegally marketed a dangerous drug, lied and manipulated regulatory bodies, and then used legal jujitsu to avoid any personal liability.

This is par for the course.

Corrupt people become rich at the expense of their victims. The Sacklers are predators. Now, they’re immune from personal liability.

[Side note: The FDA approved Oxycontin and several other opioid drugs without evaluating the risk. Sound familiar?]

Want to fix the problem?

These companies are corrupted by money. If the money stops flowing, so will the crime.

←
Previous
Top FDA vaccine officials RESIGN to avoid prosecution for crimes against humanity as White House, CDC commit GENOCIDE
→
Next
The Incredible Story of Laetrile Part I: What Causes Cancer? A Review of Popular Theories Through the Ages