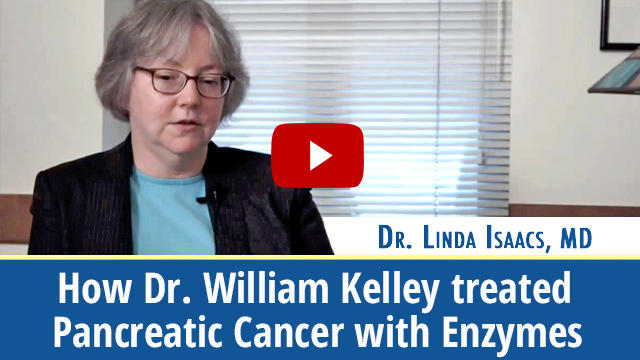 Dr. Linda Isaacs: Well, when I met Nick Gonzales he was investigating Dr. Kelley’s work. And so much of what I would have to say is in effect taken second hand. I mean, I met Dr. Kelley myself. But much of Nick’s work was done before I actually came on the scene, so to speak.

But on the other hand I could say that the data that Nick was collecting was part of what got me convinced that this is the direction I needed to go because it was compelling data and there was nobody else but Nick and me to follow up on this. Dr. Kelley was an orthodontist by training. And he got into cancer treatment because he himself got very, very ill with what was almost certainly pancreatic cancer.

Now this was in the early sixties so there were no CAT scans and the only way to make a biopsy was to do an operation. And so many times pancreatic cancer was diagnosed by autopsy in that day and age because there was no reason to take somebody to the operating room to prove an academic point when everyone could tell that they were sick and on their way to death.

Dr. Kelley had lost enormous amounts of weight. His report had a mass sticking out of his abdomen. And his doctor said looks like pancreatic cancer. And he had four young children. He had a lot of reasons to live. He was actually in his late thirties, early forties, something like that. So he was very motivated to try to figure something out.

Then he added on pancreatic enzymes in an effort to help his digestive problems because like many patients with pancreatic cancer he was having enormous difficulty just digesting his food; a lot of gas, et cetera. So he took large amounts of pancreatic enzymes. And then he started taking them in between his meals and found that the character of the tumor seemed to be changing.

So based on that he did a little investigating and found out about the work of Dr. Beard. But he noticed a change in the tumor sticking out of his abdomen when he himself started taking large doses of pancreatic enzymes. So the pieces of his treatment program came together bit by bit. He found that as he took more and more enzymes he started to feel bad. And he discovered that coffee enemas could help him feel better.

So the idea there is that the enzymes as they do their work create waste materials the coffee enemas help get rid of those. 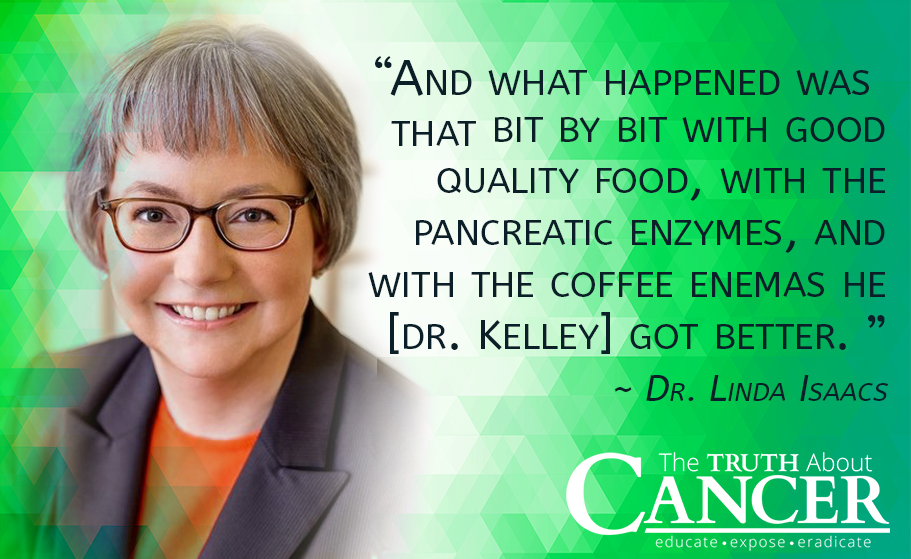 And what happened was that bit by bit with good quality food, with the pancreatic enzymes, and with the coffee enemas he got better.

And he collected more and more cases of people that should have been dead that were still alive and doing well after many, many years. That is when Nick came on the scene and started doing the research to collect the data to try to move forward in terms of documenting this particular approach.

Ty Bollinger: Now the numbers that I have read, and we interviewed Dr. Gonzalez, he said he personally looked through I think ten thousand cases.

Ty Bollinger: But the numbers I read is that in total Dr. Kelley had in excess of thirty thousand documented cases of different types of cancers. And it was an excess of a ninety percent, I think, five-year survival rate with those thirty thousand plus cases. That is pretty amazing.

Dr. Linda Isaacs: That is. I cannot really comment on the accuracy of those statistics. But he certainly had enormous numbers of patients who were doing well when they should have been gone.

←
Previous
Holiday Recipe: Cancer-Fighting Almond Goji Brazil Nut Cookies
→
Next
How to Give an Immune-Boosting Foot Massage With Essential Oils 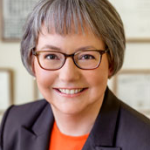