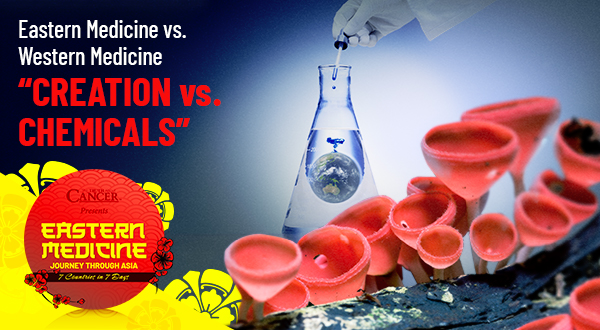 It wasn’t too long ago that I believed that the term Eastern Medicine was synonymous with “Eastern religion” and was nothing more than “woo woo” medicine, whereas Western Medicine was “scientifically proven” and “time tested.”

Little did I know that I actually had it backwards…

And on the banks, on both sides of the river, there will grow all kinds of trees for food. Their leaves will not wither, nor their fruit fail, but they will bear fresh fruit every month, because the water for them flows from the sanctuary. Their fruit will be for food, and their leaves for healing.”

The truth of the matter is that since the Garden of Eden, plants, herbs, trees, and roots have been used in a therapeutic fashion to heal the body, mind, and spirit. And that’s another facet of Eastern Medicine that needs to be emphasized. Eastern Medicine realizes that the spiritual, structural, psychological, and emotional aspects of a living being are all interconnected and that to treat an individual you must treat all aspects. In other words, you can’t simply treat human beings with chemicals and drugs and expect meaningful results.

Speaking of chemicals, any medical doctor will admit that Western Medicine relies on pharmaceutical drugs to “treat” illnesses.  In other words, it is chemical medicine.

But WHY are people sick? Is it because they are “chemically deficient”? Do pharmaceutical chemicals heal their sick body? Think about it…

Did you know that the words “pharmacy” and “pharmaceutical” are derived from the Greek word pharmakeia, which can also be translated as “sorcery” or “witchcraft”? No, I’m not saying that doctors who prescribe drugs are witches and warlocks or are “casting spells” on their patients. I’m just bringing to your attention the fact that “pharmaceutical” has a very interesting etymology. The indisputable reality is that in Western Medicine, pharmaceuticals rule the roost.

Another problem with Western Medicine is that it is still based on allopathy, or the “battlefield” treatment of ailments with drugs. Allopathy was very important during both World Wars. Faced with the choice between amputating a limb or patching up the soldier momentarily so he could get back on the battlefield, doctors chose the latter. Drugs like penicillin made this possible.

But battlefield tactics belong on the battlefield, not in the treatment of disease!  One of the primary reasons why so many people are sick is that doctors are looking at things through the narrow “battlefield” lens and are using “band-aids” (drugs) to temporarily alleviate a symptom, while never correcting the root cause of illness.

To reiterate… these drugs, which are literally “controlled poisons” made from chemicals in laboratories, do not heal but only mask illnesses and disease, and only treat symptoms.  We call them “medications,” but those who know about true health and healing (with God’s “medicine chest”) are very aware these chemical drugs are based on “pseudo science.” The reality is that there are thousands of potentially deadly drugs that are “FDA approved,” but most folks are unaware that each year in the USA, more people die from legal, properly prescribed prescription drugs than from illegal drugs sold on the streets?

That’s right! Each year, over 100,000 Americans die from the known side effects of prescription drugs. This is openly admitted by the FDA on their own website!

Did you know that over half of all pharmaceutical drugs now in use were originally derived from nature? Have you ever taken an aspirin? Where does aspirin come from?  It comes from a compound found in the bark and leaves of the willow tree. Have you ever heard of Vincristine or Vinblastine? These are chemotherapy drugs that are derived from the periwinkle flower. Another popular chemotherapy drug, Taxol, is derived from the Pacific yew tree. The problem is that aspirin, Vincristine, Vinblastine, Taxol, and all pharmaceutical drugs, have known side effects.  The real problem is that when man attempts to “improve” what God has made, the results is almost always a LESS effective remedy with possible negative side effects.

What does this indicate? God is the ultimate chemist … NOT man!

Did you know that there was once a time when Western and Eastern Medicine coexisted in the USA too? That was until the Carnegie and Rockefeller Foundations started to engineer the medical school curriculum over a century ago.

In our groundbreaking docu-series, A Global Quest, we addressed the Flexner Report of 1910. But it’s worth briefly mentioning it here. Why? Because it is the reason why Eastern Medicine doesn’t have a large presence in the USA and it’s also one of the reasons why Eastern Medicine is commonly perceived as “woo woo” or “quackery.”

Back in the late 1800s and early 1900s, medical schools taught a lot of different things. Homeopathy, naturopathy, chiropractic, and herbalism all had their own schools and were flourishing. But then the Rockefeller and Carnegie Foundations, who were heavily invested in chemical companies (many of which became pharmaceutical companies), decided to do what they did to the steel and oil industries… eliminate all competition.

How would they eliminate the competition to their chemical companies (some of which later became pharmaceutical companies)? They commissioned a report, authored by Abraham Flexner, which “found” it was too easy to start a medical school and that most schools weren’t teaching “sound” medicine. But their true motivation was not to protect the public. It was to create a medical monopoly and protect their patents and petrochemicals based medical education.

Basically, they eliminated any and all competition such as homeopathy, naturopathy, and herbalism (including Eastern Medicine)… and flooded the country with their “appropriately trained” and approved MDs. Anyone who dared to call themselves a healer without their endorsement were forced out of business or prosecuted for practicing “quackery.”

So, despite what you may have heard or thought, this is the real reason Eastern Medicine was never a big deal in the USA. Not because it’s a substandard type of medicine… which it isn’t!

If it were widely taught and utilized in the USA, Eastern Medicine would put a HUGE dent in the revenues of ‘Big Pharma’ companies who peddle chemicals. Did you know that the pharmaceutical industry spends roughly $5 billion annually on marketing? That’s more than $8,000 per physician. You see, there’s almost nothing (and nobody) that limitless funds cannot buy.

Pharmaceutical companies start early by targeting students in medical school, giving out free meals, textbooks, drug samples, and even vacations!  By the time they’re ready to practice, doctors are essentially “pharmaceutical sales reps” themselves. Clearly, the Western ‘medical model’ isn’t working. Healthcare costs are skyrocketing, people are taking more drugs than ever, and Americans are sicker than ever before.

If you have previously mocked Eastern Medicine (such as acupuncture and holistic treatments), you might want to give it another chance. One of the main distinctions and what makes Eastern Medicine so different than Western Medicine is that instead of prescribing a “one size fits all” (pharmaceutical drug) for all patients with certain symptoms, Eastern Medicine looks at the needs of each individual and unique body and acts accordingly.

I leave you with a quote from Dr. Selvam Rengasamy, who was interviewed in our Eastern Medicine documentary:

If you don’t know what else to do, you will only end up doing what you have known, or what you have learned, but sometimes it is good to have an open mind and explore, because there is nothing to lose by exploring whether natural treatments work instead of having a closed mind. And just because it’s not taught to us in medical school, just because it is not mentioned in medical textbooks, it doesn’t mean it’s not true.”

Editor’s note: This post was originally published in March 2019. It has been updated and republished in November 2019.