You are here: Home / Cancer Treatments / Why Essiac Tea Should be Part of Your Cancer Fighting Program 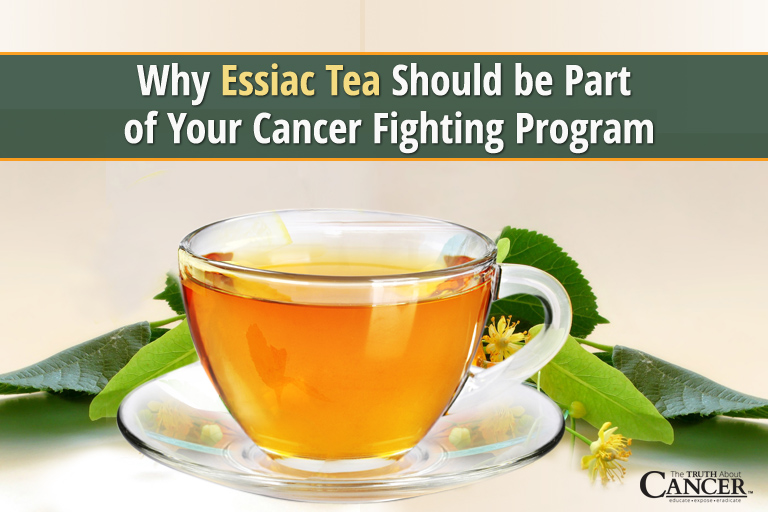 Cancer is the second leading cause of death (behind heart disease) in the United States according to the Center for Disease Control and Prevention. The western world spends trillions of dollars each year on conventional cancer treatments with limited results. Natural and inexpensive herbs and botanicals such as Essiac tea have great promise to help many who are suffering from cancer and other chronic diseases.

Powerful and effective natural cancer treatments that aid the body in healing have been discovered and utilized for years. Unfortunately, many of these natural strategies have been opposed by public health agencies and the medical mainstream. One natural approach that has been used successfully with cancer is Essiac tea.

The History of Essiac Tea

Essiac tea is said to have been an ancient recipe made by the Ojibwe tribes of Native Americans who populate areas of Canada and the northern United States. It was referred to as the “Ojibwa Tea of Life.” A Canadian nurse, Rene Caisse, was the first to use it to help her patients who were recovering from various forms of cancer. (Essiac is “Caisse” spelled backwards.)

Caisse began to see remarkable results with her patients and wanted to make this elixir available for widespread usage. In the 1920s she began working with Dr. Charles Brusch to formulate an herbal mixture similar to the original drink that could be studied in a laboratory setting.1,2

Caisse and Dr. Brusch began promoting the use of Essiac tea as an effective and affordable alternative cancer treatment. This caught the attention of the mainstream medical industry who went about spreading rumors about health risks associated with consuming Essiac tea. Due to this pressure, the Federal Drug Administration (FDA) has not approved Essiac tea for use as a cancer treatment.3 Currently, the FDA  lists Essiac tea as a new drug that is not generally recognized as safe.4

In spite of the negative attention they got from the public health agencies, Caisse and Dr. Brusch saw numerous patient testimonial stories using Essiac tea to overcome various forms of cancer. In 1938 (long before the internet), Caisse had over 55,000 people sign a petition to allow her to continue to treat cancer patients after she was accused of practicing medicine without a license. Thousands of patient testimonials lead to the popularity of Essiac tea far beyond Caisse, who passed away in 1978 at the age of 90. This herbal remedy can now be found in health stores all over the US and Canada and is a popular product sold in online markets.3,5

There are four primary herbs that make Essiac tea so effective.1,5 These herbs help to destroy overgrowth of bad bacteria, viruses and parasites, and detoxify the colon, liver and kidneys.6,7

These major herbs include:

Conventional cancer treatments increase the body’s toxic load and they destroy the individual’s immune system. Essiac tea, on the other hand, has shown the ability to strengthen the immune system and improve its ability to respond to infection. It also helps the body to eliminate toxins and provides pain relief which is welcome to anyone suffering from a chronic disease.2,6,8

Some of the companies that make Essiac tea recommend that the tea should not be used in conjunction with conventional cancer treatments. This is based off the idea that the immune system gets so damaged through conventional treatments that Essiac is unable to resuscitate the body’s immune response.

Many others believe that all cancer patients or immunocompromised individuals will benefit from the use of Essiac tea due to its powerful immune supportive nutrients.8 Clinical data remains limited, however, due to lack of research-based funding for the elixir.

A Concentrated Source of Antioxidants

Essiac tea is rich in phytonutrient antioxidant flavones, anthraquinones, and tannins. It is also rich in immune supportive polysaccharides such as beta-sitosterol that feed and strengthen immune cells.5 Studies have shown that varying concentrations of Essiac tea reduce free radical development by up to 84 percent.9

Burdock root is the major ingredient in Essiac tea and it is rich in the anti-oxidant anthraquinone which has been shown to reduce cell mutations and prevent tumor growth. Several case studies have been written up that have reported claims that Essiac tea helped see a regression of tumor size and severity of symptoms. These patients suffered from different forms of cancer including uterus, bowel, and prostate cancer as well as growths on the skin’s surface.2,5,6

Several animal studies have shown that Essiac tea usage decreases the ability of tumor cells to multiply. The researchers did note a decrease in growth of normal cells in these cases but the herbal extract was effective at preventing the proliferation of cancerous cells at a higher rate.8

The use of Essiac tea has been a very effective strategy for thousands of people over the last century. The herbs are safe and typically well-tolerated by the body. Using Essiac tea may be a great therapeutic tool for you in your cancer prevention and immune supportive health plan.

The typical dosage that is recommended is 1 fluid ounce (30ml) once daily, diluted with 2 fluid ounces of hot water. This should be sipped slowly like a hot tea and should be done preferably before bedtime and at least two hours after eating. Food should be avoided within at least an hour after drinking the tea.

It is always advisable to consult with your physician and holistic practitioner before starting any sort of new treatment. Essiac tea is not recommended for brain cancer patients as it may induce swelling, which could be life-threatening if it creates too much pressure in the cerebral cavity.

←
Previous
Why the Increased Cost of Cancer Treatments Under Obamacare?
→
Next
The Truth Exposed: Komen and Breast Cancer Awareness