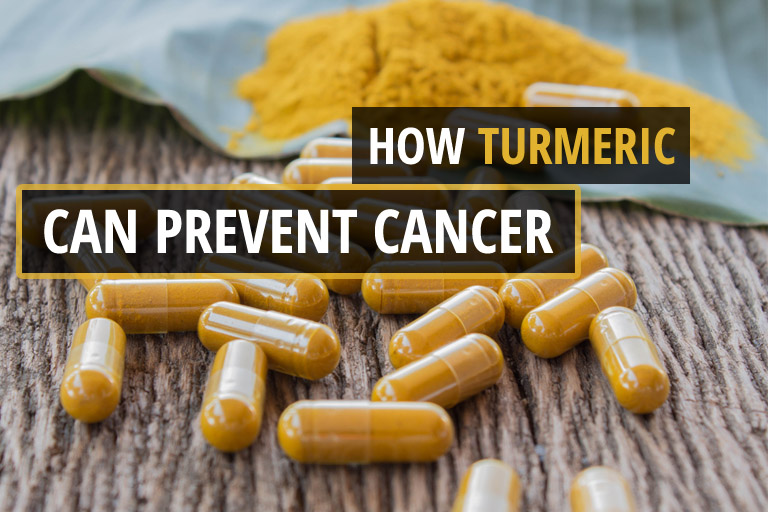 With over 100 different types of this life threatening disease, it sometimes seems like getting a cancer diagnosis may be inevitable. According to the 2014 statistics from the American Cancer Society, cancer causes nearly 1 out of 4 deaths in the United States.

However, emerging research studies prove that your diet plays a vital role in preventing cancer. One common kitchen ingredient that you can add to your anti-cancer diet today is turmeric.

These groundbreaking studies found that the turmeric rhizome (root) might just be one of the most effective common ingredients in the world for keeping you healthy and cancer-free. If you’re still are not convinced, then keep reading to discover for yourself the top five health benefits of turmeric for cancer prevention.

Turmeric is a member of the ginger family that has been used for centuries in traditional Ayurvedic and Chinese medicine. With its anti-inflammatory, antioxidant, antimicrobial, hepatoprotective, immunostimulant, antiseptic, and antimutagenic properties – it’s been used in the treatment of digestive disorders, liver problems, skin diseases, wounds, parasites, and periodontal diseases.  Did you know… turmeric can also be used as a mouth wash?!

Chronic inflammation is believed to play a role in virtually every chronic disease in the Western hemisphere. Cancer, metabolic syndrome, heart disease, and cognitive disorders such as Alzheimer’s disease have all been linked to chronic inflammation.

Inflammation and cancer have a circular relationship − meaning that inflammation in the body can create cancer and excess inflammation fuels cancer growth.

In countries where turmeric is heavily consumed the incidence of cancer is significantly lower. The effects of turmeric’s anti-inflammatory properties were examined on inflammatory cell factors NF-kB and STAT3. Turmeric rather than pure curcumin (a compound in turmeric) inhibited these factors that accelerate inflammation.

Turmeric contains over 300 bio-active components; the focus of most research studies has been centered around curcumin. Curcumin has 150 potential therapeutic uses. Imagine the healing potential of turmeric that could be unleashed once its other active compounds are studied! In fact, turmeric has been shown to work as well and better than many over-the-counter anti-inflammatory drugs.

Cancer cells are just like every other cell in the human body in that they contain DNA. Their DNA regulates growth and development. A one millimeter cluster of cancerous cells typically contains somewhere in the ball park of a million cells, and on average, takes about six years to get to this size.

Most tumors can’t be detected by traditional testing until it spreads past the one millimeter mark, meaning that cancer cells often go undetected for several years. By adding turmeric to your daily cancer prevention diet, you may be able halt the growth and spread of cancer cells since curcumin alters DNA instructions of cancer cells and effectively induces cellular death in cancer cells.

Angiogenesis is a physiological response in which your body creates new blood vessels when new tissues form inside of your body. Through angiogenesis, newly formed tumors and cancer cells develop the additional blood supply they need to grow.

Cancer cells cannot rapidly spread or even survive without a blood supply and turmeric has the ability to prevent angiogenesis within your body. There are a number of powerful anti-cancer foods that can starve cancer cells.

5. Increases the Antioxidant Capacity of the Body

The spice also contains other potent antioxidants and is 5 times stronger than vitamins C and E. These antioxidants found in turmeric can boost your body’s production of one of the Master Antioxidants − glutathione − which is vital for cellular health and immune system function.