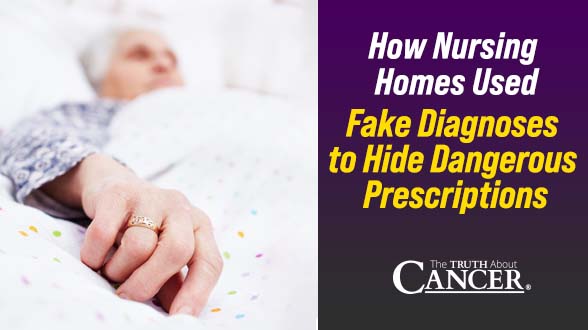 A New York Times investigative report has discovered that over 20% of nursing home residents are currently prescribed antipsychotic medications, with 1 in 9 patients diagnosed with schizophrenia. The report shows that most of these patients have been improperly diagnosed so that dangerous antipsychotics can be used off-label as sedatives.

Many of the diagnoses appear to be efforts to give residents sedative drugs such as Haldol, so understaffed facilities can better handle them, even when there is no evidence a patient has schizophrenia. The diagnosis is given to treat residents for symptoms like restlessness and agitation.

Misusing these drugs can cause a facility’s reputation to fall, so in order to avoid officially reporting the usage of antipsychotics, nursing homes are resorting to falsely diagnosing residents with schizophrenia to dodge reporting regulations.

In the US, schizophrenia is prevalent in less than 0.64% of the population. The disorder, which presents psychotic symptoms such as hallucinations, delusions, and thought disorder, is usually diagnosed when someone is in their late teens to early thirties, according to the National Institute of Mental Health.

So why are the elderly being diagnosed at such a high rate?

Because facilities do not have to report residents using antipsychotic drugs to the government if those residents are being given the drug to treat schizophrenia, the Times reported.

A May 2021 report from the Department of Health and Human Services Inspector General found that about a third of nursing home residents who got a schizophrenia diagnosis in 2018 had no Medicare record of being treated for it.

“People don’t just wake up with schizophrenia when they are elderly,” Dr. Michael Wasserman, a geriatrician and former nursing home executive who has become a critic of the industry, told the Times. “It’s used to skirt the rules.”

The Centers for Medicare and Medicaid Services spokesperson Catherine Howden told the Times the agency was “concerned about this practice as a way to circumvent the protections these regulations afford.

It is unacceptable for a facility to inappropriately classify a resident’s diagnosis to improve their performance measures. We will continue to identify facilities which do so and hold them accountable.”

These antipsychotic drugs are extremely dangerous when misused.

Antipsychotic drugs — which for decades have faced criticism as “chemical straitjackets” — are dangerous for older people with dementia, nearly doubling their chance of death from heart problems, infections, falls and other ailments. But understaffed nursing homes have often used the sedatives so they don’t have to hire more staff to handle residents.

For nursing homes, money is on the line. High rates of antipsychotic drug use can hurt a home’s public image and the star rating it gets from the government. Medicare designed the ratings system to help patients and their families evaluate facilities using objective data; a low rating can have major financial consequences. Many facilities have found ways to hide serious problems — like inadequate staffing and haphazard care — from government audits and inspectors.

“If physicians are improperly diagnosing individuals with serious mental health issues in order to continue an antipsychotic regimen, they should be reported and investigated,” Dr. David Gifford, the chief medical officer at the American Health Care Association, which represents for-profit nursing homes, said in a statement.

In 1987, President Ronald Reagan signed a law banning the use of drugs that serve the interest of the nursing home or its staff, not the patient.

But the practice persisted. In the early 2000s, studies found that antipsychotic drugs like Seroquel, Zyprexa and Abilify made older people drowsy and more likely to fall. The drugs were also linked to heart problems in people with dementia. More than a dozen clinical trials concluded that the drugs nearly doubled the risk of death for older dementia patients.

And the issue may not be unique to nursing homes.

In our home town of Nashville, a member of the Foster Care Review Board (a volunteer group that helps ensure that children in state custody are receiving the care they need) discovered that 3 children in the same facility all received Seroquel… and had no idea what it was for; they just thought it was for sleep.

Upon further investigation, the prescribing physician – Dr. David Struble – had received $1,450 in early 2010 from AstraZeneca for a “speaking fee”, which was just before the company paid out $520 million over their illegal marketing of Seroquel for off-label use (primarily as a sedative). AstraZeneca was accused of intentionally marketing the drugs by paying kickbacks to doctors (including bogus speaking fees and other incentives).

Seroquel is approved by the FDA to treat schizophrenia, bipolar I disorder, and acute depressive episodes in patients with bipolar I and II. Given that the prevalence of bipolar disorder is only 2.6% in males (remember: the prevalence of schizophrenia is even lower at 0.1%), it was a huge red flag that so many youth in state custody have been prescribed the drug.

The underage patients seemed to be under the impression that they had been prescribed Seroquel to help them sleep, which is NOT an approved use. The primary concern was that Dr. Struble – who received money from AstraZeneca during a time that they were bribing doctors to use Seroquel for off-label use – was prescribing Seroquel as an off-label sedative for patients in state custody.

Seroquel carries with it several risk factors, including suicide in adolescents.

2 months after the complaint was filed, we reached out to the facility in question, and learned that Dr. Struble was no longer employed by the state, although we found no record of civil or criminal charges being filed.

Caring for patients with dementia or behavioral issues is time-consuming and labor-intensive. Workers need to be trained to handle challenging behaviors like wandering and aggression. But many nursing homes are chronically understaffed and do not pay enough to retain employees, especially the nursing assistants who provide the bulk of residents’ daily care.

Studies have found that the worse a home’s staffing situation, the greater its use of antipsychotic drugs. That suggests that some homes are using the powerful drugs to subdue patients and avoid having to hire extra staff. (Homes with staffing shortages are also the most likely to understate the number of residents on antipsychotics.) 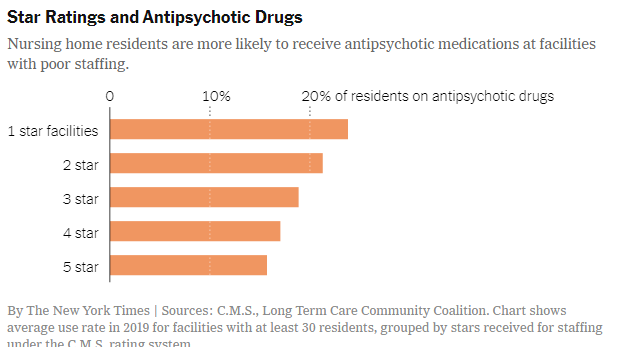 In 2019 and 2021, Medicare said it planned to conduct targeted inspections to examine the issue of false schizophrenia diagnoses, but those plans were repeatedly put on hold because of the pandemic.

In an analysis of government inspection reports, The Times found about 5,600 instances of inspectors citing nursing homes for misusing antipsychotic medications. Nursing home officials told inspectors that they were dispensing the powerful drugs to frail patients for reasons that ranged from “health maintenance” to efforts to deal with residents who were “whining” or “asking for help.”

In more than 99 percent of the cases, inspectors concluded that the violations represented only “potential,” not “actual,” harm to patients. That means the findings are unlikely to hurt the homes’ ratings.

The corruption is real. Understaffed care providers are using dangerous drugs for off-label use to make their patients more manageable. To learn more about what’s REALLY going on behind the scenes, sign up now to watch PROPAGANDA EXPOSED, the 8-part docuseries that will change the way you think about modern medicine. It’s free.