You are here: Home / Cancer Prevention / Frankincense and Cancer – What You Need to Know About This Essential Oil 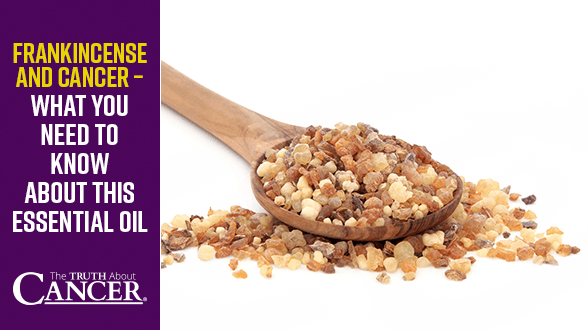 As they made their iconic trek from the Far East to witness the invaluable gift of the newborn King, the three wise men from the biblical account of the birth of Jesus came bearing their own gifts. One of them, frankincense, possesses a value much more significant than just a fragrant incense. It demonstrates powerful anti-cancer effects that even in modern times legitimize this precious oil as being truly fit for a king.

Frankincense, also known as olibanum, has been used for thousands of years and is a popular type of essential oil used to help:

But many people remain unaware of the added cancer-fighting potential of this precious serum, which researchers from the University of Leicester in the UK (among others), confirmed through rigorous scientific testing.

Also known as boswellia, frankincense claims as part of its vast nutrient profile a unique compound known as acetyl-11-keto-beta-boswellic acid, or AKBA for short. Scientific tests have determined that AKBA is a sworn enemy of cancer. With funding from the government of Oman, researchers from the University of Leicester were able to uncover how frankincense may prove to be a safe and effective therapy for women who suffer from ovarian cancer – one of the leading causes of cancer in women.

Even in patients with late-stage ovarian cancer – which is exceedingly difficult to treat using conventional cancer treatment methods – the researchers discovered that the AKBA found in frankincense oil demonstrated clear efficacy.

Here’s what Kamla Al-Salmani, lead author of the paper and a PhD student at the University’s Cancer Studies and Molecular Medicine department, had to say about their findings in late 2013:

After a year of studying the AKBA compound with ovarian cancer cell lines in vitro, we have been able to show it is effective at killing cancer cells. Frankincense is taken by many people with no known side effects. This finding has enormous potential to be taken to a clinical trial in the future and developed into an additional treatment for ovarian cancer.

Related research into AKBA has shown that this unique substance is also effective against other forms of cancer as well, including breast, colon, and prostate cancers. And the evidence suggests that frankincense isn’t just a supplemental treatment to go along with chemotherapy and radiation; in some cases it may actually be preferential as a replacement.

The reason for this is that frankincense shows demonstrable effectiveness in a few areas where chemotherapy isn’t all that effective, particularly with regards to ovarian cancer. Commenting on the study’s findings, Dr. Mark Evans, who heads the program of which Al-Salmani is a student, explained that certain cancer cell lines that don’t respond to chemotherapy are notably responsive to frankincense.

Though commonly mixed with a carrier oil such as saponified coconut oil or jojoba oil and applied topically, frankincense can also be consumed orally by putting one or two drops of the oil into a beverage. Purity and quality is extremely important when using essential oils – especially if you are ingesting essential oils. Always be sure to consult with a qualified healthcare practitioner versed in the proper use of essential oils before undertaking such a regimen – especially for cancer-fighting purposes.