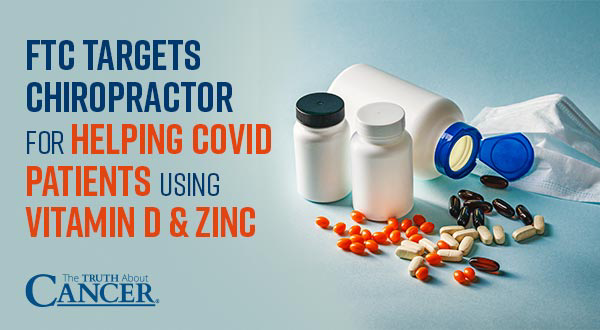 Dr. Eric Nepute, a chiropractor and owner of Quickwork LLC, has pledged to defend himself against the Federal Trade Commission (FTC), which is accusing him of engaging in “deceptive marketing practices” concerning the use of vitamin D and zinc in treating the Wuhan coronavirus (Covid-19).

The Department of Justice (DoJ) filed a lawsuit on behalf of the FTC accusing Nepute of violating the COVID-19 Consumer Protection Act (CCPA), which forbids American doctors from prescribing anything other than “Operation Warp Speed” injections and face masks to “cure” the Chinese Virus.

Because Nepute has been helping patients stay healthy and protected through the use of vitamins and other offerings from nature, the American government wants to fine or imprison him for committing the “crime” of recommending natural remedies.

Passed back in December while Donald Trump was still in office, the CCPA says it is now “illegal” for any American “to engage in deceptive marketing related to the treatment, cure, prevention, mitigation, or diagnosis of COVID-19” – this means nothing other than vaccines and masks for the American cattle.

Nepute had been saying that vitamin D and zinc are far more effective at keeping people healthy than injecting mRNA poisons and wearing Chinese cloth over the face. This is against the law in the “land of the free,” as only pharmaceutical companies, communist China, and Tony Fauci are allowed to provide “health care.”

NIH website says zinc, vitamin D both support immunity – are they “guilty” of violating CCPA, too?

It is important to clarify, here, that the federal government itself fully admits that zinc supports a healthy immune system. Right on the website of the National Institutes of Health (NIH), where Tony Fauci works, it is written that zinc “deficiency depresses both innate and adaptive immune responses.”

The NIH website also lists vitamin D as beneficial for the human body, as it helps to support “[proper] immune function.” This means that the NIH also believes that both vitamin D and zinc could help to protect against Chinese Germs.

Does this mean that the NIH also needs to be sued by the DoJ on behalf of the FTC for violating the CCPA?

It seems as though government bureaucrats can say and do whatever they please when it comes to health matters, but when ordinary people – in this case a doctor – try to help people using nature’s offerings, they are persecuted for it.

“Why do you think that they’re promoting the vaccine and suppressing what people like [Nepute] are saying? It’s on their website, that vitamin D affects the immune system,” asks Thomas Renz, an attorney who has been fighting Wuhan coronavirus (Covid-19) tyranny in this country for the past year.

“It’s on their website that zinc affects the immune system. And yet they’re going to say that [Nepute] shouldn’t be saying that zinc and vitamin D might affect your immune system in a positive way?! They’re saying it! How is it a violation of the law for him to say it?! It’s not. They just want to suppress anything they can with this because they need to push this stinking poison [the experimental vaccines] into as many people’s arms as they can … this is one of the most corrupt, egregious violations of rights I’ve ever seen.”

Nepute is also being persecuted by the American government for warning people that Wuhan Flu shots do not stop the spread of the Chinese Virus. This is common knowledge that even the government itself admits is true.

This article was originally published on NaturalNews.com. It has been republished here with permission.