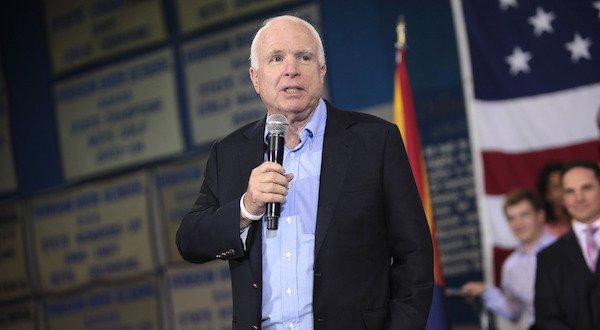 In August 2018,  John McCain, long-serving Republican senator from Arizona, succumbed to a deadly form of brain cancer known as glioblastoma. This is the very same disease that took the life of Senator Ted Kennedy in 2009. Why is modern medicine, with all its technological, medical, and financial resources unable to successfully fight this deadly cancer?

Cancer is the second leading cause of death in the U.S., claiming roughly 600,000 lives every year. Decades of research have revealed that most cancers are very complex diseases, especially those that have metastasized or migrated from the original area of the body where the cancer first began.

Coincidentally, glioblastoma was the first type of cancer to undergo a thorough examination as part of the project led by the U.S. National Cancer Institute (NCI) known as “The Cancer Genome Atlas.” This project aims to catalogue genetic mistakes – known as mutations – that may be responsible for various cancers, along with analyzing DNA sequences and patterns of gene expression of human cancers.This data will be made publicly available for all scientists to study.

Glioblastoma is a rapidly-growing tumor of the central nervous system that forms from supportive cells in the brain and spinal cord, which are known as glia – hence the name. This type of cancer is usually seen in adults.

Unfortunately, like many other cancers, glioblastoma is not a single disease. For instance, even though glioblastoma cancer cells from Senator McCain’s tumor and Senator Kennedy’s tumor might have appeared the same under a microscope, they were likely quite different from each other at the cellular level, with different patterns of DNA mutations and different pathways driving their growth.

In other words, these two patients very likely didn’t really have the same disease, even though we call their cancers by the same name. Given this scenario, it’s obvious that there can be no single “one size fits all” therapeutic solution for patients with glioblastoma.

To add to this complexity, even within a given patient’s glioblastoma tumor, individual cancer cells can differ dramatically from one another. This is because they diverge over time as a result of their rapid, unpredictable growth and accumulation of different mutations within different tumor cells.

This means that the same treatment, when administered to all glioblastoma tumor cells in a single patient, will not kill all of the cells with the same effectiveness. Additionally, resistant tumor cells are likely to grow back and multiply in response to ongoing treatment, eventually leading to a treatment-resistant tumor. It’s important to find the right treatments for your cancer. Finding the right doctor is an important first step.

Another typical characteristic of glioblastoma is its highly invasive nature. These tumor cells have a habit of crawling away from the main tumor mass and embedding themselves deep within the normal brain, often hidden behind a natural protective shield known as the blood-brain barrier. While the main central tumor mass might be accessible and surgically removable, the invasive finger-like projections protruding into other areas of the brain may not all be detected or removed by surgery.

We’ve discussed the dangers of chemotherapy before. Pumping our bodies full of toxic chemicals often does more harm than good. Fortunately, there are other ways to combat and prevent cancer, including the right nutrition to starve cancer cells and boost the body’s immune system.

Find the most powerful, little-known ways to fight cancer and live a long, healthy life from the world’s leading experts in The Truth About Cancer: A Global Quest docu-series!