You are here: Home / Featured Articles / Ripped From My Arms: Inside China’s Latest COVID Atrocities 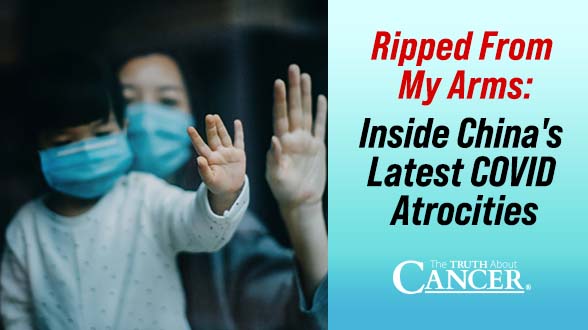 Shanghai, China’s biggest city, is facing a heavy new wave of COVID cases, prompting swift and decisive action to combat the pandemic. At least, that’s what they’d have you believe. In reality, The city of over 26 million people is experiencing less than one symptomatic case for every 100,000 residents (or 0.001%).

Nevertheless, China has already instituted severe restrictions on the world’s third largest city by population. In addition to a total lockdown of Shanghai’s 26+ MILLION citizens, the communist nation has also been shipping patients off to “quarantine camps,” often separating children from their parents.

In Shanghai, anyone who tests positive for the coronavirus, whether or not the symptoms are severe, must isolate in a hospital or designated facility. The practice has worried parents, who fear that their children will be separated from them if they are forced to isolate.

Photos and video that showed young children isolated from their families and crying at a Shanghai hospital led to an outburst of anger online last week. In the images, a series of hospital cribs, each holding several young children, appeared to be parked in the hallway of the Shanghai Public Health Clinical Center in the city’s Jinshan district. A video showed several of the children crying.

Chinese authorities are forcing children as young as three months old into quarantine centers away from their parents as part of their endless Zero Covid strategy. Under China’s unbending virus controls, anyone found positive — even if they are asymptomatic or have a mild infection — must be isolated from non-infected people. That includes children who test positive but whose family members do not, health officials confirmed on Monday, defending a policy which has spread anxiety and outrage across the city.

“If the child is younger than seven years old, those children will receive treatment in a public health center,” Wu Qianyu, an official from the Shanghai Municipal Health Commission, said Monday. “For older children or teenagers… we are mainly isolating them in centralized [quarantine] places.”

One mom in Shanghai who brought her toddler to a local hospital with a fever last week says the girl was whisked away to a quarantine center for children, while she stayed at the hospital.

Both Esther Zhao and her daughter tested positive for COVID-19, but Zhao said she’s gotten one brief message that her daughter was fine — despite repeated pleas for information about her child.

Her husband, who also tested positive, is at a separate quarantine site.

“There have been no photos at all… I’m so anxious, I have no idea what situation my daughter is in,” Zhao said Saturday. “The doctor said Shanghai rules are that children must be sent to designated points, adults to quarantine centers, and you’re not allowed to accompany the children.”

One woman who said her 2-year-old daughter was locked inside the Jinshan clinical center called the situation “totally inhumane” in a telephone interview. The woman, Lucy Zhu, 39, a Shanghai native, visited Shanghai Tongren hospital with her daughter after feeling unwell last week. Shortly after she tested positive for the coronavirus and began her isolation at the hospital, she was separated from her daughter.

Then on Tuesday, her daughter was transferred to the center in Jinshan, and Ms. Zhu was told she could not accompany her. From then until Saturday morning, she had not been able to establish direct contact with her daughter. Although officials said her daughter was fine, they offered her no proof.

The city has set up about 47,700 beds in a number of newly built temporary hospitals in Shanghai, with another 30,000 being readied, state news agency Xinhua reported on Tuesday, citing Gu Honghui, deputy secretary general of the municipal government.

A total of 62 temporary quarantine sites have been designated in hotels, stadiums and exhibition centers, said Gu.

But the conditions in these quarantine centers are atrocious. In a video that has gone viral on social media, chaotic scenes can be seen at the Nanhui quarantine site in the Chinese city of Shanghai. People can be seen complaining about the insufficient staff and shortage of food at the isolation site amid a lockdown in the city.

They are fighting over limited resources such as water, food, and blankets which are considered basic necessities.

The video has been shared thousands of times on Chinese social media platforms such as Weibo and WeChat.

A Chinese user who shared the video said, ”If you can, please help us expose (the situation). It’s so scary…nobody is managing the situation properly.” Several people at the designated field hospital could not get any of the supplies being distributed because, by the time they reached the front of the queue, nothing was left.

Complaining about the horrible conditions at the quarantine site, another Chinese social media user wrote: “Can you take a look at the Nanhui hospital site, my mum tested positive and was at home for a week laying low and she recovered, yet they still recklessly took her away.”

”When she arrived she had to snatch a room for herself, nothing was fixed, people testing positive and negative all mixed together, there was no hot water, no healthcare workers, no nurses, there was nothing. People had to fight over food and water, the chaos and confusion was over the limit.”

In a special report by the Wall Street Journal, Lu Jiaying – a Shanghai tech worker – recounts her ordeal after been shipped off to one of these “quarantine centers”:

“My only wish is to leave this place alive,” she told a Wall Street Journal reporter. Despite repeatedly texting negative for COVID, Jiaying was ordered to board a bus headed to a quarantine center.

It wasn’t until 14 hours after boarding the bus that passengers were given food, water, or an opportunity to use the restroom.

This is the reality in China.

Children ripped from their parents’ arms. Regular citizens forced to endure brutal journeys only to be cooped up in tightly-packed cubicles without the most basic of necessities.

These people are begging to have their stories told. The response in China – indeed, the world – is not about public safety. It’s not about fighting a virus. It’s about establishing control. Since May of 2020, there have been 5 reported COVID deaths in China.

In a country of 1.4 BILLION people! That’s 1 death in every 280 million people over nearly 2 years! As a communist nation, China has easily instituted the use of government health tracking apps, lockdowns, and social surveillance.

But don’t think for a second that this can’t happen in America. Even now, masks are required on planes – regardless of the origin or destination of the travelers. Until recently, athletes in NYC were unable to play in their home stadiums, despite spending the rest of the week with the team and playing games in other stadiums.

None of this makes sense unless you connect the dots.

And none of this will stop until we fight back.