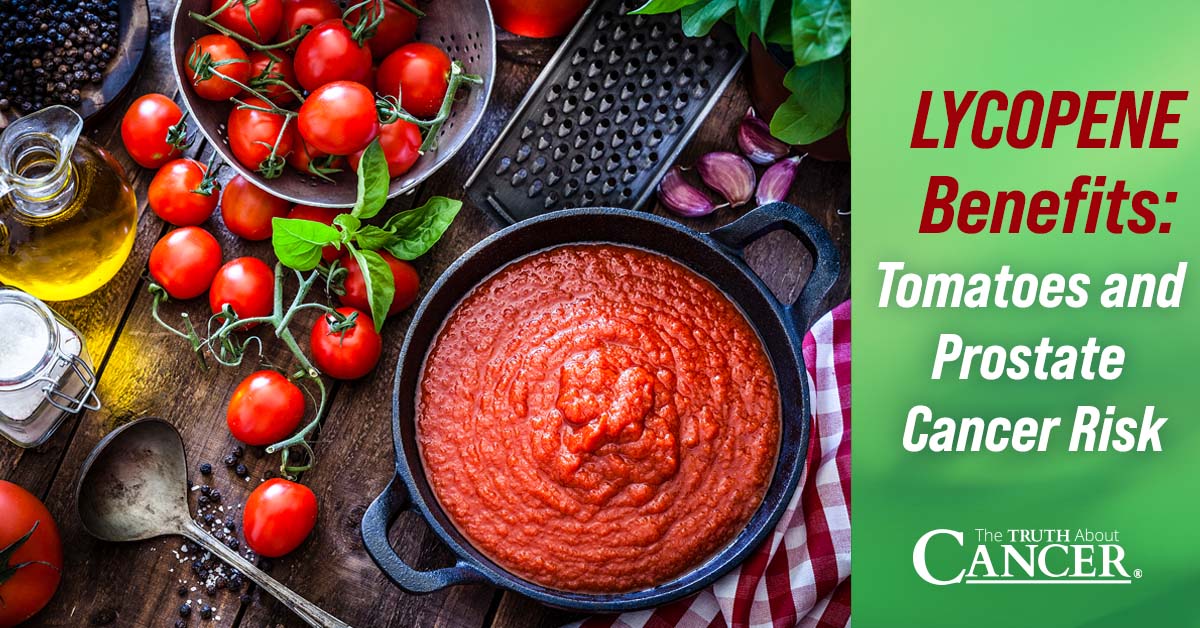 Did you know that tomatoes get their familiar bright orange-red color because they contain a naturally occurring red plant pigment known as lycopene?

Lycopene is a phytochemical that is found in colorful fruits and vegetables such as apricots, watermelons, guavas, pink grapefruit, papayas, red carrots, red bell peppers, red cabbage – and of course, tomatoes. Some non-red foods such as asparagus and parsley also contain small amounts of lycopene.

A phytochemical is a natural compound found in plants that gives fruits and vegetables the color and smell we associate with them. Interestingly, some phytochemicals have specific actions in our body when we consume them. Believe it or not, as many as 4,000 different phytochemicals are believed to exist in nature!

In its natural state, lycopene protects plants from the stress of sunlight exposure. At the same time, it helps plants to use the sun’s energy to make the nutrients they need. Animals, including us humans, cannot make lycopene in our body. We need to consume these colorful fruits and vegetables regularly to take full advantage of lycopene’s benefits.

Because of its deep red color and lack of toxicity, lycopene is often used in the food industry as food coloring.

How Lycopene Benefits Your Health

Lycopene acts as an antioxidant – in other words, it counters the actions of harmful “free radicals” in our body when we consume it. A free radical is a highly reactive molecule that damages important biological structures in our body’s cells, such as DNA and proteins. Antioxidants limit the damage free radicals cause by chemically neutralizing them.

Many scientific studies carried out over the past few years show that lycopene benefits health by helping to prevent prostate, lung, and stomach cancers. There is also some evidence that increased lycopene consumption can lower the risk of other cancers as well. Not only that, lycopene consumption may help to lower the risk of cardiovascular disease and stroke, perhaps by reducing levels of LDL or “bad” cholesterol, and by lowering blood pressure. 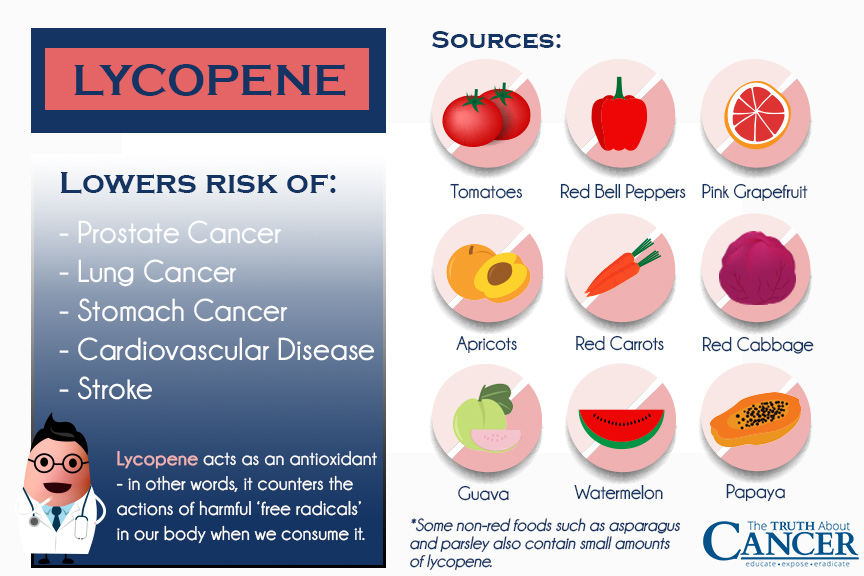 The Health Professionals Follow-Up study carried out in 1995 was the first to indicate that lycopene in tomatoes may have anticancer benefits, specifically that it may help to lower prostate cancer risk. Let’s take a look at some of the scientific evidence that has emerged since then supporting this exciting idea that lycopene may one day be a valuable asset in fighting prostate cancer.

Lycopene’s Effect on Prostate Cancer in the Laboratory

Similarly, other studies show that a combination of lycopene and anticancer drugs stops the growth and spread of prostate cancer much more effectively than when these drugs are used alone − with no additional side effects.

Population studies look for risk factors and study how disease can be managed in large groups of people. Such studies have found that high amounts of dietary lycopene are linked to a lower risk of developing prostate cancer in men. For example, a 2013 review found that men who eat a lot of raw or cooked tomatoes have a slightly lower risk of prostate cancer, especially if they had a previous family history of the disease.

In one clinical trial, men with a condition known as benign prostatic hyperplasia were given tomato sauce dishes for three weeks before their scheduled surgery to remove the prostate gland.

Benign prostatic hyperplasia is simply an enlarged prostate gland which may cause problems with urination. This condition is considered to be a normal part of aging in men and is not the same as prostate cancer.

Coming back to the trial, consuming tomato sauce dishes lowered the levels of prostate specific antigen (PSA) in patients with benign prostatic hyperplasia, relative to patients who were not given tomato sauce. PSA is considered a “marker” for prostate cancer risk – in that PSA levels are often higher than normal in the blood of men with prostate cancer.

However, because of mixed results in various clinical trials, the jury is still out as to whether lycopene consumption can in fact lower the risk of developing prostate cancer in men. 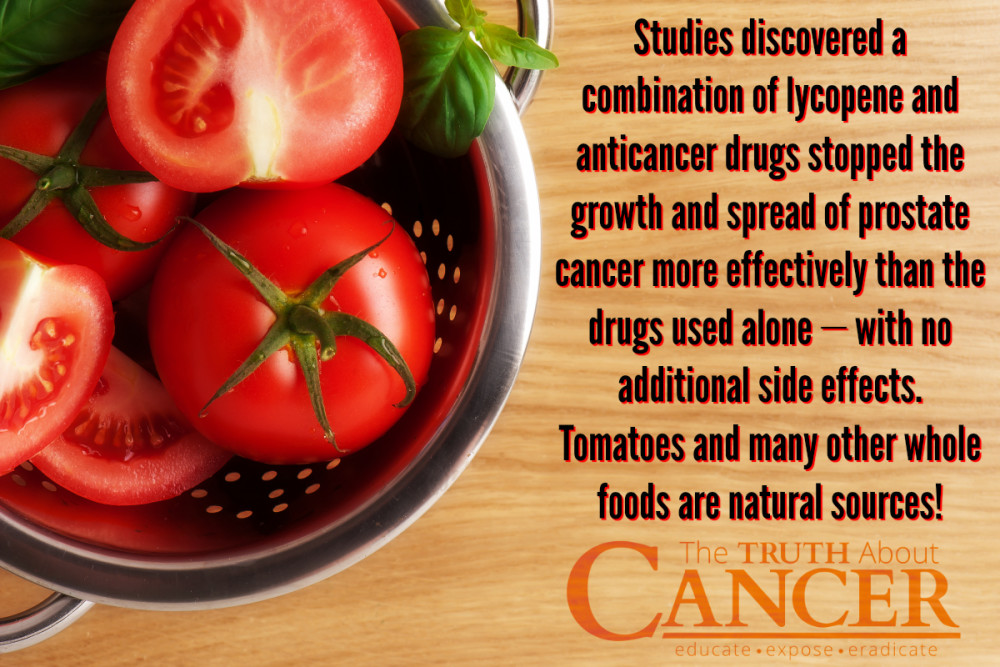 Can Lycopene Be Used to Treat Prostate Cancer?

In one clinical trial, men with prostate cancer were given 30 milligrams daily of lycopene supplements for three weeks before prostate surgery. At the end of three weeks, those men had smaller tumors than the men who did not get lycopene, suggesting that lycopene may indeed be helpful in the treatment of already existing prostate cancer.

According to health experts, although the initial evidence looks promising, more clinical trials are needed to confirm that lycopene can indeed be used to treat prostate cancer patients.

In the meantime, what can you do to take advantage of lycopene’s many health benefits, including its potential anti-cancer abilities?

However, did you know that tomato puree, spaghetti sauce, tomato soup, salsa, ketchup, and tomato paste are all much more concentrated sources of lycopene than fresh tomatoes?

The only problem is that many of these tomato products, when purchased commercially, also contain high levels of salt, sugar, and preservatives. This makes them a lot less healthy than consuming fresh organic tomatoes.

Some health experts recommend that to make the most of lycopene’s anti-cancer benefits, you should consume 5-10,000 micrograms of lycopene daily, from organic food sources.

Why From Food and Not Lycopene Supplements?

Lycopene supplements are regularly used in studies and clinical trials, but that doesn’t necessarily mean you should also opt for them. Daily doses of 10-120 milligrams have been shown to cause diarrhea, nausea, and vomiting, bloating, gas, and gut irritation. However, it was noted that these relatively mild symptoms went away when lycopene supplements were ingested along with meals.

While supplements may provide a conveniently purified form of lycopene, it may not be the right form. Also, other phytochemicals in tomatoes may be contributing towards lycopene’s anti-cancer health benefits. We just don’t know enough at this point.

Our advice is to stick to a diet that includes many different varieties of natural, organic, lycopene-rich foods. It’s cost-effective, easy, and risk-free (unless you are allergic to tomatoes). Include fresh or canned unadulterated, non-irradiated tomatoes and other lycopene-containing organic fruits and vegetables in your meals and salads as often as you can.

Here’s a tip – dicing and cooking tomatoes in olive oil helps your body absorb lycopene better than if you eat them raw. Unlike other nutrients that can be compromised when heated, the bioavailability of lycopene increases with cooking.

Using homemade tomato sauce and tomato paste (again, made from fresh organic tomatoes) in soups and stews is another great way you can take full advantage of the anticancer benefits of lycopene, along with the many other beneficial phytochemicals in tomatoes.

←
Previous
Anthocyanins: 4 Ways This Unique Plant Pigment Protects Against Cancer
→
Next
Cancer-Fighting and Other Health Benefits of Broccoli