You are here: Home / Cancer Treatments / What a Good Natural Health Practitioner Needs to Do (video)

Video Transcript: What a Good Natural Health Practitioner Needs to Do

Ty Bollinger: So, Dr. Wolfe, what is the medical industry into then?

Dr. Wolfe: The medical industry? Well, let’s take a look at it. Can we look at it like a pyramid thing? What we’ve got is—first, we’ve got the petroleum, pharmaceuticals, food conglomerates. They’re all just one big company and that company is to control.

So, what are they in to? They are in to making money off of everybody else’s pain. I already told you that if you were one of these families, you would believe that you were actually a God. That you’re here. And it was your job to just rape and pillage. And that’s how it is and that’s what they do.

So medical doctors—if pharmaceuticals are the pimps, what are the medical doctors? So now, a medical doctor, he becomes a doctor because he’s intelligent, he’s done a lot of schooling and he really wants to help people. But a lie is a lie no matter who tells it and no matter who’s playing it out. So, it’s not going to end there, is it?

It is only going to end with, maybe, practitioners, natural health practitioners and medical doctors that breakaway from the system that want—what do they want to do? They want to train people. Not treat them. Because I don’t care how good a practitioner you are, whether you are a medical or whether you’re a natural health practitioner. If you are in the business of treating, then guess what? Your patient is only going to be feeling good until the next treatment. It’s going to be treatment, treatment, treatment until we actually train. That’s why everything I do now is about training.

And why don’t we want to treat them? Because natural health practitioners have the same medical model as the medical doctors do. And we also live in fear because we would like to be like them, making all that money.

What we do is we try to sell them treatments and we try to sell them lots of great products but we don’t teach them how to look after their bodies. We don’t teach them to respect their bodies. See, what happens is that pharma, the media, have stripped everybody of their dignity. People have lost control. They’ve given up. They feel helpless. They feel hopeless. And you know what? Who’s going to save them, Ty? 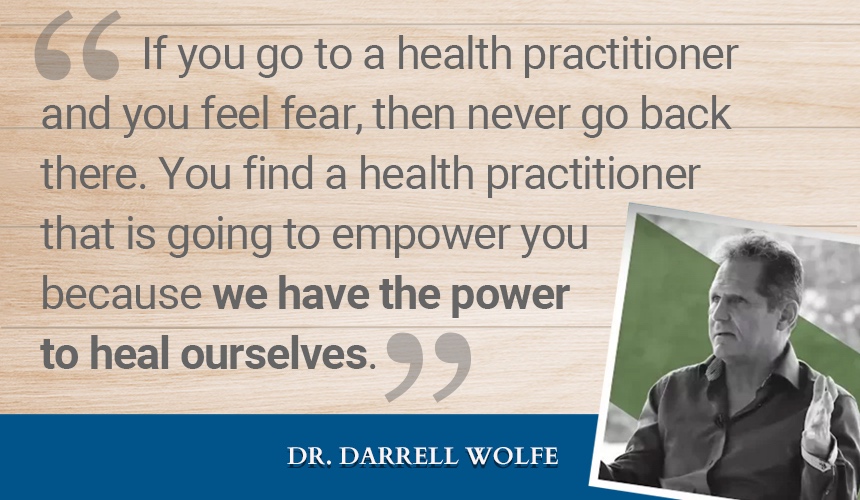 Here we got the War on Cancer. They spent billions of dollars and your videos have done more than all these billions of dollars will ever do because you put hope back into these people’s hearts. You put hope back into their minds. You’ve galvanized them. When somebody comes to me and they have cancer, when they leave my clinic they know that they are not going to die. For the first time, they are not full and reeking with fear.

Ty Bollinger: I appreciate your passion on that. I would have to agree. That’s really our position as well, that we need to educate people. We need to give them the knowledge that they need so that they can implement whatever it might be that can heal their body. They need to be the ones that are empowered, not the practitioner but the person needs to have the knowledge because it’s the body that heals.

Dr. Darrell Wolfe directed The North American Institute for the Advancement of Colon Therapy for 15 years and also headed up one of North America’s leading natural cancer treatment and preventative health care centers.Dr. Wolfe currently resides in British Columbia, Canada, where he treats and consults patients from around the globe. Dr. Wolfe is the director of the International Training Institute of Health, where they teach in-depth courses to students, health professionals, and corporations worldwide.Dr. Wolfe has 35 years of experience and is known as the "Doc of Detox." He has formulated the most effective and efficient detoxification and restoration program to help those suffering from constipation to cancer. Dr. Wolfe’s Best Selling book "Healthy To 100" uncovers common dysfunctional belief systems regarding today’s health, nutrition and detoxification leaving the reader with simple life-changing, cost-effective strategies.www.docofdetox.com/