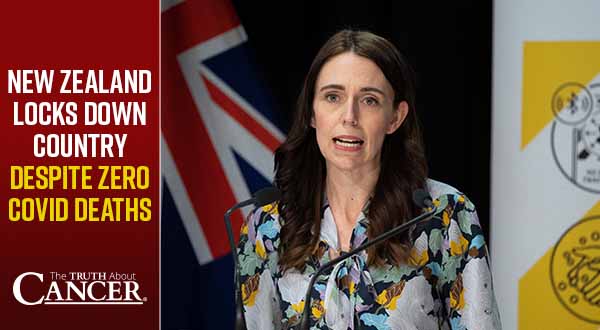 Let that sink in folks!! Under the new edict by Jacinda the tyrant, for 72 hours, Kiwis were not allowed to leave their homes except for exercise, grocery shopping, and essential health care visits. Due to ONE positive COVID-19 test!


Although less than 20% of the population is vaccinated, New Zealand has remained relatively unscathed since the pandemic began. In fact, the island nation has recorded less than 3,000 cases since 2019 and only 24 deaths in a population of 5 million.

New Zealand hasn’t reported a fatality in 6 months, with the last COVID-19 mortality recorded in February of this year. But that hasn’t stopped them from pushing for increased vaccination and forcing citizens to stay in their homes.

On the other side of the Tasman Sea, Australia has also instituted severe lockdown restrictions. Australia has recorded 975 deaths since 2019 and has a roughly 34% vaccination rate. In a population of over 25 million, this amounts to a 0.001% mortality rate.

But the Australian restrictions have been severe, with some states deploying military forces to help enforce the new “rules.” Residents in cities like Sydney are under nightly curfews, required to wear masks at all times, and are limited to a 5km radius of their homes. These “rules” are being actively enforced by local police and military personnel.

God forbid someone walk their dog without a mask AND shop at a grocery store 4 miles away! Heck, they’ll probably be executed on the spot! In some areas, residents have reported helicopters circling their homes and using loudspeakers to remind citizens to stay in their homes.

But Australians fought back this weekend as thousands of people took to the streets to protest the draconian lock-downs. In Sydney, police patrolled the streets and blocked all transportation into the city in an attempt to keep protesters away.

Officials have tried to paint its totalitarian regime as something necessary for the greater good while vilifying those who protest or disobey the orders. Victoria Police Chief Commissioner Shane Patton had earlier warned people to stay away from the protest, adding it was “just ridiculous to think that people would be so selfish and come and do this.“

“We are in a very serious situation here in New South Wales. There is no time now to be selfish, it’s time to think of the broader community and your families,” said state Health Minister Brad Hazzard.

What kind of community can exist when citizens are forced to stay in their homes and forbidden from traveling freely or visiting with neighbors? How is it “healthy” for children to see police and soldiers patrolling the streets, demanding proof of a “reasonable excuse” for being outside or going to the store?

What kind of government turns citizens into prisoners?


And they all believe that the government, in the name of the “greater good,” should have more control over your daily lives than you do.

There is only one reason that America has not yet seen the level of oppression and slavery currently in places overseas: The Second Amendment.

Before you stop reading, let us be clear: We’re not advocating for violence. We do not believe that the use or threat of force is the right way to navigate our differences. We are not “domestic extremists” or “gun nuts.”

The only thing that will keep a tyrannical government in check is fear of its own people. Our government is composed of elected officials who are meant to represent our interests while upholding our constitutional rights. When that government threatens to use force and violence to infringe on your intrinsic freedoms, you have the right to rise up and push back.

In fact, it is your DUTY as an American citizen.

Soldiers will never patrol American streets enforcing lock-down orders because the American People simply will not allow it. Armed Americans comprise the greatest army in the world… a major deterrent to violent tyranny.

In Wisconsin, Pennsylvania, West Virginia, Michigan and Idaho combined, there are about 2.5 million registered hunters. Those men and women alone would comprise the largest standing army in the world. Texan hunters could claim that title all on their own.

Factor in the number of citizens who are not registered hunters but still own firearms for home defense, sport, or simply because they CAN.

We do not want a fight. Too many brave men and women have already died in defense of this great nation, and the American Civil War opened a national wound that is still not completely healed.

Just listen to the words of the Declaration:

“…whenever any Form of Government becomes destructive of these ends, it is the Right of the People to alter or to abolish it, and to institute new Government, laying its foundation on such principles and organizing its powers in such form, as to them shall seem most likely to effect their Safety and Happiness.”

We are born with certain unalienable rights, and are permitted to change or abolish any government that impedes those rights.

“Prudence, indeed, will dictate that Governments long established should not be changed for light and transient causes; and accordingly all experience hath shewn, that mankind are more disposed to suffer, while evils are sufferable, than to right themselves by abolishing the forms to which they are accustomed.”

Altering or abolishing the government should not be taken lightly, and it is better to suffer those small grievances when we can.

“But when a long train of abuses and usurpations, pursuing invariably the same Object evinces a design to reduce them under absolute Despotism, it is their right, it is their duty, to throw off such Government, and to provide new Guards for their future security.

When the government is guilty of ongoing and systemic oppression and the erosion of our freedoms, it is our duty as free men to throw off that government and establish a new one.

This isn’t “extremism” …  It isn’t “alarmism” … It is most definitely not a call for violence.

If we don’t want to end up like New Zealand, it is imperative that we act now. We MUST exercise our right to protest. We MUST exercise our God-given rights to free speech. We MUST remind our government that they work for we the people… and be prepared to face them directly should they continue to erode and destroy our nation.

On April 19th, 1775, Captain John Parker, leader of the local militia, addressed his men. This was 5 years after the Boston massacre, where British soldiers opened fire on unarmed protesters in the streets. This was in the midst of extreme tension between citizens and the military presence patrolling the city.

The men had been stockpiling weapons and ammunition, but the government had driven prices so high that musket powder had become a commodity (sound familiar?) These men knew that a fight was coming. And while they didn’t relish the thought of armed conflict, they were willing to put their lives on the line to defend their freedoms.

It was then that Captain Parker spoke the words that have become so true for us in the face of such relentless government oppression:

“Stand your ground. Don’t fire unless fired upon. But if they mean to have a war, let it begin here.”