You are here: Home / Cancer Causes / How to Protect Your kids from Harmful EMF Radiation 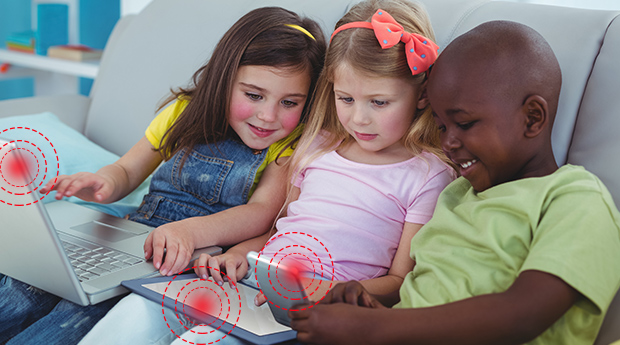 How times have changed. When I was a child the only screen we had in my house was the TV. Now screens are ubiquitous. It’s becoming the norm to see children, even toddlers with laptops and tablets on their laps, or clutching on to smartphones.

The kids are happy because they can play games, watch cartoons, surf the Internet, message their friends, and do their homework. Parents and grandparents are happy because it keeps the kids occupied so that they can get on with doing other things. But are these technologies safe… or are our children being exposed to potentially harmful EMF radiation from phones, tablets, and laptops?

The most dangerous aspect of using computers on laps are the electromagnetic field exposures (EMFs). Few people realize that all computers emit EMFs on many different frequencies. Magnetic fields and electric fields are always present. Radio frequency radiation or microwave radiation is increasingly present.

If your child’s laptop or tablet can connect to the Internet wirelessly, via WiFi or Bluetooth or other, then that means they are being exposed to microwave radiation.

You might think that these exposures are very low power and therefore are perfectly safe… or aren’t they?

The Most Dangerous Aspect of Computers On Laps

It is widely accepted that these radio frequency radiation microwave exposures are very low level. But studies are now telling us that these exposures have the potential to cause significant harm. These man-made exposures are quite unlike anything that exists in nature. And, because laptops, tablets and the like are used in such close proximity to the body, they are particularly dangerous.

What’s the Harm of EMF Radiation?

These EMF exposures impact the body in a number of ways. Notably they are known to compromise cell membrane function, calcium and antioxidant balance, DNA, and blood brain barrier permeability.

Here is a non-inclusive list of diseases linked to EMF exposures of the type given off by tablets and laptops:

Dr. Magda Havas, Professor of Environmental & Resource Studies at Trent University in Canada, is a leading researcher in this field. She states:

Perhaps the most pertinent warning is that given by Federal Communications Commission Office of Engineering & Technology (FCC) which is the organization responsible for evaluating the safety of these devices. The FCC report, OET Bulletin 65, states that computer laptop type devices need to be placed at least 20 cm (approximately 8 inches) from the body.

The World Health Organization (WHO) has also made its position clear with regard to WiFi radiation type exposures. In May 2011 the WHO issued a statement classifying these exposures as a possible class 2B carcinogen. 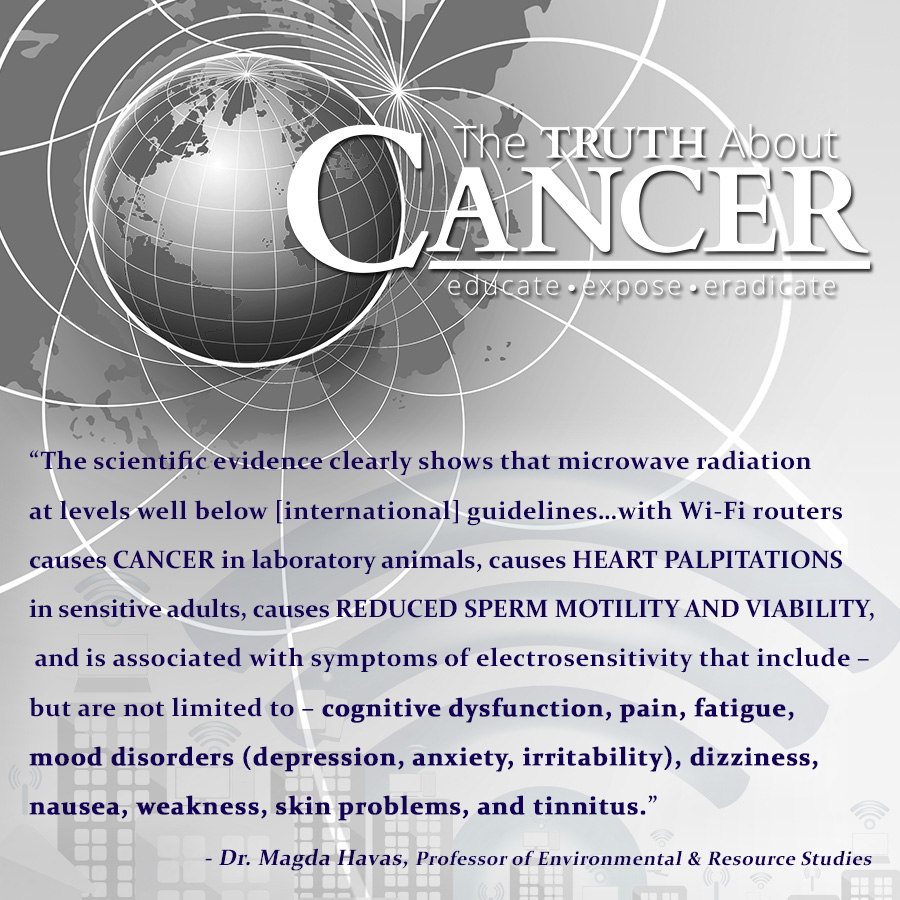 Growing Kids are Particularly at Risk from EMF Radiation

Children are not “small versions” of adults. Multiple studies indicate that children are particularly vulnerable to the effects of these EMFs. Which means that you as a parent or grandparent need to be particularly vigilant.

Children in schools with WiFi are increasingly complaining of heart palpitations and feelings of weakness and fatigue in the classroom. Several students in one school area in Canada have experienced sudden cardiac arrest. As a result some schools are now installing defibrillators (for sudden cardiac arrest) and removing microwave ovens, whose signal interferes with the WiFi routers.

One of the most tragic recent cases is that of British school girl Jenny Fry. Unable to live with the WiFi in her school, Jenny was found hanging in woods close to her home last year. Speaking after the inquest Jenny’s mother said, “WiFi and children do not mix. I believe that WiFi killed my daughter.”

Other Reasons to Not Allow Computers On Laps

Beyond the EMF question there are numerous other good reasons not to allow children to use laptops and tablets on their laps. One important one is posture.

A study carried out in Finland on 436 schoolchildren found that daily computer use of two hours or more increased the risk of pain in the neck and shoulders (21% of the children), pain in the head (20%), and pain in the lower back (16%). Girls were affected more than boys.

Some studies also point to behavioral issues with excessive screen use. The more our children immerse themselves in the cyber world, the less they develop their real life social skills. Children need to go out into the world. They need to move and interact in real time, face to face, not just via a screen.

Tips for Safe Computer Use for Kids

Here are some tips to promote safer computer use for your children:

Perhaps, most important, is to have a conversation with your kids about computer use. They might be too young to understand about the dangers of EMF radiation exposure, but start by educating them in Internet safety etiquette and privacy issues. 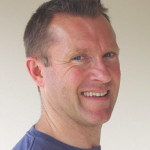 Lloyd Burrell was running a successful small business when one day in 2002 he began to feel unwell when using his cell phone. Within a matter of days he developed highly debilitating symptoms when using his phone, computer, and all types of electromagnetic devices in his home and workplace. When his doctors and the medical community drew a complete blank, Lloyd set out to find his own solutions. Lloyd has now made it his life mission to raise awareness about the dangers of electromagnetic fields (EMF) and share the remarkable discoveries he’s made on his quest to recover his health. Lloyd writes for numerous magazines and websites, hosts EMF teleseminars, and is a regular guest on radio shows and other events. You can download his free EMF Health Report at his website www.ElectricSense.com