You are here: Home / Featured Articles / Sacklers to Pay 6 BILLION in Opioid Lawsuit 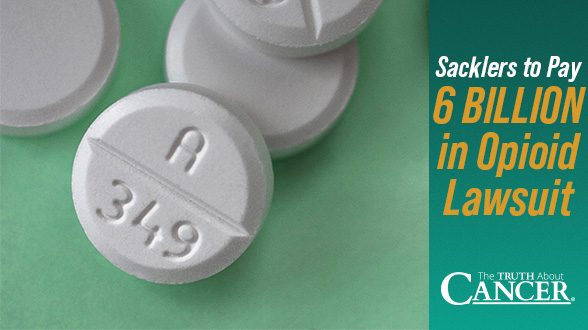 New developments in the ongoing opioid litigation as the Sackler family – owners of Purdue Pharma and the creators of OxyContin – will pay up to $6 BILLION to settle claims that they are responsible for the opioid epidemic that has killed millions.

Back in September, Judge Robert Drain of the U.S. Bankruptcy Court in White Plains, N.Y. issued a ruling that would have protected the nefarious Sackler family from liability in the wake of the opioid epidemic. Under the bankruptcy agreement, Purdue Pharma would pay $4.3 billion to settle opioid lawsuits, and the Sackler family will relinquish control of the company.

The ruling would have provided the most notorious drug pushers in history, whose company Purdue Pharma got the country hooked on OxyContin, with immunity from future lawsuits related to the opioid epidemic they helped create.

But that settlement deal was blocked by attorneys general from 8 different states and the District of Columbia. The Sackler family owners said in a statement that they “sincerely regret” that OxyContin “unexpectedly became part of an opioid crisis.” The family members said they acted lawfully but a settlement was by far the best way to help resolve a “serious and complex public health crisis.”

But that isn’t true.

Over the last 20 years, U.S. opioid overdose deaths have increased by more than 600%. Every day, about 130 Americans die from an opioid overdose. Right now, you are more likely to die from an accidental opioid overdose than a car accident. And the Sackler family has become increasingly wealthy as the death toll rises.

Want proof? Just read the deposition of Richard Sackler, who pretended for hours that he had no idea how much money he’d made or how the company operated. The company, led by Richard Sackler, assembled a massive sales force dedicated to preaching the OxyContin gospel. In this twisted religion, chronic pain was “sin” and OxyContin was “the savior.” They proselytized day and night about the scourge of chronic pain, and the safety of opioids. They even developed a mantra:

“OxyContin is the drug to start with and stay with.”

U.S. Bankruptcy Judge Robert Drain must approve the deal, which protects the Sacklers from civil lawsuits. Purdue requested a March 9 hearing for Drain to review the agreement. This deal would once again protect the Sackler family from any personal liability, although the hefty price tag may offer some small consolation for victims and their families.

Purdue filed for bankruptcy in 2019 in the face of thousands of lawsuits accusing it and members of the Sackler family of fueling the opioid epidemic through deceptive marketing of its highly addictive pain medicine.

The company pleaded guilty to misbranding and fraud charges related to its marketing of OxyContin in 2007 and 2020, although members of the Sackler family have continued to deny any wrongdoing.

For regular readers of our work, none of this will come as a surprise. A major pharmaceutical company illegally marketed a dangerous drug, lied and manipulated regulatory bodies, and then used legal jujitsu to avoid any personal liability.

This is par for the course.

Corrupt people become rich at the expense of their victims. The Sacklers are predators. Now, they’re immune from personal liability.

[Side note: The FDA approved Oxycontin and several other opioid drugs without evaluating the risk. Sound familiar?]

Want to fix the problem?

These companies are corrupted by money. If the money stops flowing, so will the crime.

←
Previous
10 Health Benefits of Spring Cleaning
→
Next
The What, How, and Why’s of the 7 Essentials System®