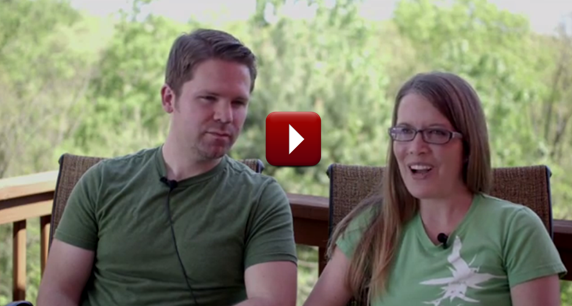 Cortney Campbell: In 2008, when I was 26, we had been married for almost 3 months. I was diagnosed with nodular lymphocyte predominant Hodgkin’s lymphoma. Stage 2. I had a mass in my armpit and another in my neck.

And yeah, it was definitely a time where I was very afraid. After they give us our initial protocol that they were going to suggest, which was 6 rounds of chemo and radiation to follow that, and they removed the lymph node, the largest one, which was about the size of a lemon from my armpit.

And you [looking at her husband] did not have peace about that.

Cortney’s Husband: Well she went in and got the lymph node removed and it came back after…

Cortney’s Husband: …went to several different hospitals because they couldn’t quite figure out what. They knew it was cancer, but they couldn’t pinpoint exactly what kind of cancer it was. So after about three weeks of waiting and then hoping that it was somehow something else, it came back and…

Cortney Campbell: It was a very rare cancer. And they weren’t quite sure how to treat it. One doctor said the extreme chemo. Another doctor said we might be able to give you a mono-clonal antibody called Rotoxin and see how you do first. And then if it doesn’t respond, then maybe we’ll go toward the R-top chemo, which was what the first doctor said.