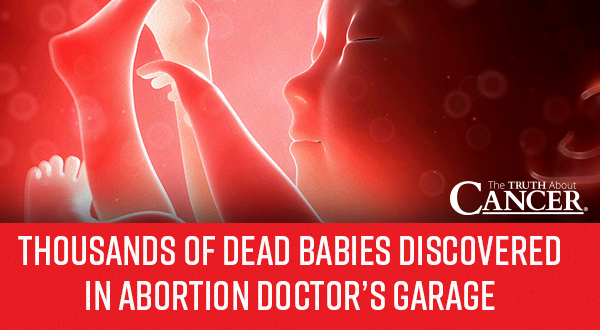 A threatening force, the same monster — Destiny … that rolls every civilization to doom (W. L. Sullivan)

Something monstrous – especially : a person of unnatural or extreme ugliness, deformity, wickedness, or cruelty. Ex: His father was a monster who beat his children for no reason. (Mirriam-Webster)

Let’s consider these definitions as we recount some recent, disturbing discoveries.

Last week, thousands of children were laid to rest in a cemetery in South Bend, Indiana. These children did not die from war, disease, or some kind of natural disaster – they were executed.

In late 2019, authorities reported that the remains of 2,411 murdered babies were found in the garage of a deceased physician. After he passed away in September of 2019, Dr. Ulrich Klopfer’s family discovered more than 70 boxes in his garage containing the remains. A month later, they found more than 150 more corpses in the trunk of the doctor’s Mercedes Benz.

Dr. Klopfer was an infamous abortion doctor operating several clinics in South Bend, Gary, and Fort Wayne, Indiana. Over the course of several decades, the physician performed tens of thousands of abortions, some “legal” and some not. And he performed them with brutal efficiency.

While working in Chicago in the 1970s, he would compete with a fellow abortionist, Dr Ming Kow Hah, to see who could achieve the higher tally. The two rivals in this grotesque contest would ask clinic staff how many patients the other had operated on that day.

Klopfer would be having a cup of coffee and be on his last sip when he’d jump up and say, “I’d better get going or Hah will have the whole recovery room full.”

This macabre obsession with speed and efficiency made him one of the most prolific abortion doctors in the world. Allen County Right to Life (a pro-life organization) moved its headquarters next to his Fort Wayne clinic. But Klopfer continued to perform abortions in Indiana, despite the state’s reputation for having some of the country’s toughest restrictions on the procedure.

Protests outside of his Indiana clinics took place on a weekly basis, but to little avail. Dr. Ulrich Klopfer took the lives of more children than anyone could have believed. The boxes in his garage – each filled with promising lives that had been stolen – were stacked floor to ceiling at the end.

Although he would often cite instances of rape or abuse as excuses for his career in murder, testimony revealed that Dr. Klopfer had failed to report serious crimes, performing his abortions and then sending victims back into harm’s way. Once he performed an abortion on a 10-year-old girl who had been raped by her uncle. The parents knew about the abuse but refused to press charges. Klopfer decided not to inform the police and send her back into the abusive situation.

It eventually cost him his medical license.

And his methods were far from groundbreaking. In fact, was essentially using the same abortion and sedation procedures from the 1970s and 1980s throughout his career. In a 2016 hearing with the Indiana Medical Licensing Board, it was discovered that he often refused to give his patients pain medication unless they could afford to pay extra.

Board member Rebecca Moredock-Mueller described Klopfer as having a nonchalant attitude and lacked sound medical judgment. “The thing that bothered me most was his professional incompetence,” she said.

As we mourn these children who have finally been laid to rest, it’s important to see the bigger picture here. Most media coverage has focused on how bizarre it was for Dr. Klopfer to keep these bodies in his garage and car. But no one is focusing on the fact that one man made it his life’s mission to take the lives of those who can’t yet speak for themselves.

There are some who have compared Klopfer’s systemic execution of babies to the genocide performed by the Nazi regime. And while that comparison is often misused, it may not be that far off when it comes to this doctor.

Ulrich Klopfer was actually born in Nazi Germany, surviving the devastating firebomb attacks of 1945 which claimed the lives of 25,000 Germans. This was something he talked about often and may have been an underlying reason for his obsession with exterminating young American lives.

When anti-abortion physician Geoffrey Cly met Klopfer in 2008 to discuss concerns that Klopfer’s procedures were endangering patients’ health, Klopfer immediately brought up the 1945 raids on Dresden, in which some 25,000 people died. “How is the suffering from the bombing by the Americans in Dresden any different than the suffering of women by unwanted babies?” Cly recalled Klopfer saying.

I thought his abortions, how he kept the fetuses, might be unconscious revenge for the bombings.

Klopfer was known as combative, engaging in physical and verbal altercations with protesters. He even suggested that the police pour acid in their eyes. He was a calculated maniac, obsessed with death and angry about his childhood. His view of abortion as a competition with other doctors should have sent up some red flags.

At TTAC, we’ve not really talked about abortion before. It’s an extremely polarizing subject that many publications avoid altogether for fear of losing their audience.

But this is important, and here’s why:

We are against anything that kills or injures innocent lives. That includes high dose chemotherapy, untested drugs, toxic herbicides, and abortion. Laws across the globe have become more and more relaxed regarding abortions, and this is the result. Evil men who make it their life’s mission to kill.

In fact, just days ago, according to National Review:

By a vote of 53 – 44, the Senate has failed to pass the Born-Alive Abortion Survivors Protection Act, which would have required doctors to provide medical care to infants born alive after an atempted abortion procedure. The bill – sponsored by Senator Ben Sasse (R, Neb.) and cosponsored by 49 of his fellow Republican senators – needed 60 votes to overcome the legislative filibuster.

How far down the slippery slope have we gone in killing babies? So it is against the law to force someone to save a born alive baby’s life?

The fact that these babies are often unable to sustain life on their own yet should be even more reason to protect them. How many among us have medical issues that require life-saving intervention? Should they also be put to death at the whims of their caregivers? Should the most vulnerable among us be tossed out with the garbage?

From news accounts, the nation’s shock and outrage seemed to be over the strange hoarding of these remains throughout the years rather than the murders which took place.

Standing in the Southlawn Cemetery in South Bend and presiding over the burial ceremony, Indiana Attorney General Curtis Hill said:

The shocking discovery (of the remains) was horrifying to anyone with normal sensibilities. Regrettably, there is no shortage of depravity in our world today, including due regard for the most vulnerable among us.

Mass burial of aborted human beings has occurred before. In the 1980s, about 16,500 were buried at a Los Angeles cemetery after being discovered in a cargo container repossessed from a medical laboratory operator’s home. Out in California, a headstone reads: “In memory of the 16,500 precious unborn, buried here, Oct. 6, 1985.”

It is a sick and depraved legacy that we are leaving behind for future generations – or at least the ones we don’t kill before birth. Each one of us should be disgusted by this story.  But our disgust shouldn’t just be about the offensive way these bodies were saved and hoarded. We should be disgusted that 2,411 human beings were killed.

All of the remains found in Klopfers garage belonged to babies aborted between 2000 and 2003. These children would be between 17 and 20 now. They would be graduating high school, beginning college, or starting their careers. Perhaps even starting families of their own. I have children this age right now. There is so much promise ahead for them and my heart breaks for the children who never had that chance.

These murdered babies, once discovered, were given the respect and dignity of a proper burial and memorial service. Immediately after the discovery, Congress introduced the Dignity for Aborted Children Act, which would require the proper burial of all aborted children nationwide.

So here’s my question…

Monsters do exist, but they aren’t hiding under the bed or in your closet. They’re right out in the open.