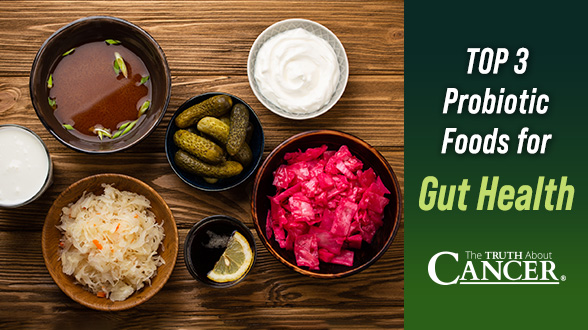 What are probiotics and why are they beneficial?

Probiotics, which are defined as “microorganisms introduced into the body for their beneficial qualities,” are types of live bacteria and yeasts that are especially beneficial for your digestive system and immune system.

You can think of probiotics as healthy “good bacteria”, which crowd out and counteract the effects of the “bad bacteria” that make you sick. Probiotic bacteria help the body function properly in a number of ways. Believe it or not, it’s estimated that the human body hosts about 2,000 different types of bacteria, which are most concentrated in the gut, mouth and skin.

These healthy bacteria can be acquired both by eating fermented foods/beverages and by taking probiotic supplements. Let’s take a closer look at 3 popular and well-established probiotic-rich foods, their probiotic components, and potential health benefits.

Yogurt – by far the most popular fermented dairy product in the U.S. today – is a nutrient-rich food that contains protein, calcium, magnesium, vitamin B12, and some key fatty acids that our body needs to stay healthy. The habit of consuming fermented dairy milk is believed to date back over 6,000 years to Central Asia. Not long after, this practice also became popular in India, Persia, and Turkey.

Today, the terms fermented milk and yogurt are used interchangeably, although the standards used to define them differ considerably from country to country.

There are many known benefits of consuming yogurt, including:

Basic yogurt naturally contains one of 2 bacterial strains, either Streptococcus thermophilus or Lactobacillus bulgaricus. Other bacteria, including strains of Lactobacillus and Bifidobacterium, are typically added to many commercially available yogurts. These added probiotics can survive into the intestine and have been shown to impact both gut health and immune functions.

In the U.S., yogurt is sometimes heat-treated after fermentation, killing the live cultures used to create it. Such yogurts can no longer be described as probiotic. However, many commercially available yogurts are either not heat treated after fermentation or contain added live cultures of probiotic bacteria, and therefore can be described as probiotic yogurt. For this reason, it is best to buy yogurts that say “live and active cultures” on the label.

Kefir has been consumed for hundreds of years by people living in the Caucasus mountains, specifically in Eastern Europe, Russia and Southwest Asia. With a slightly viscous texture and a tart-acidic flavor, low levels of alcohol, and in some instances slight carbonation, kefir is traditionally made with cow or goat milk. Its name is derived from the Turkish word keyif, which means “feeling good” after eating.

High in probiotics as well as many nutrients, kefir is very beneficial for digestion, gut, and overall health. In fact, traditional kefir can contain any of up to 61 different probiotic microorganisms in various proportions, making it a much more potent source than any other fermented dairy product, including yogurt. Kefir also contains a large population of yeasts, lactic acid, as well as other minor products of fermentation which contribute to its flavor. Additionally, kefir typically also contains a polysaccharide known as kefiran.

Kefir also contains a wide variety of bioactive compounds, including organic acids and peptides that contribute to its health benefits.

Certain probiotics in kefir, including Lactobacillus kefiri, have been shown in laboratory studies to block the growth of various species of harmful bacteria, including Salmonella, Helicobacter pylori, and E. coli. Kefiran has also been shown to have antibacterial properties.

Full-fat kefir is a great source of calcium and vitamin K2. Supplementing with vitamin K2 has been shown to significantly reduce the risk of fractures.

Probiotics have been shown to protect against cancer in animal models. Some probiotic strains were seen to reduce postoperative inflammation in cancer patients. Probiotics also offered relief to patients suffering from chemotherapy or radiotherapy-related diarrhea.

In fact, the protective role of kefir against cancer has been demonstrated in multiple laboratory studies. (38, 39) For instance, one study found that kefir extract reduced human breast cancer cells by 56%, compared to only 14% for yogurt extract.

Like yogurt, kefir can be consumed by people who are lactose intolerant. Also, kefir Is easy to make at home using kefir grains, which can be purchased from health food stores and some supermarkets, as well as online.

Sauerkraut, a fermented food made originally from cabbage, dates back as a food source to the 4th Century B.C. In fact, Hippocrates, the Father of Medicine, described sauerkraut as a health food and medicinal remedy in his writing. The Romans also valued the beneficial effects of sauerkraut.

Although most commonly associated with Central and Eastern European cultures, sauerkraut has been part of the American diet since the country’s founding, either as a cooking ingredient, side dish, or condiment. Today, both mass-produced and artisanal preparations of sauerkraut are widely sold in the United States.

Rich in lactic acid, vitamin A, vitamin B, vitamin C, and vitamin K as well as minerals with only a few calories, nutrient-rich sauerkraut was – and still is – the ideal winter food when fresh food is scarce.

Lactic acid bacteria are the main probiotic microorganisms in sauerkraut and are critical for successful fermentation. They produce the organic acids, bacteriocins, vitamins, and flavors responsible for sauerkraut’s extended shelf life, flavor, and nutritional content.

First isolated from milk, lactic acid bacteria are found in fermented milk products, vegetables, beverages, and bakery products. They occur naturally in soil, water, manure, sewage, silage, and plants. They are also part of the microbial population living in our intestines, mouth, and skin and are known to suppress or kill undesirable bacteria in food and in our body.

Consumption of lactic acid bacteria and their fermented foods has been linked to multiple health benefits, including enhancing the immune system and greater protection against infections and diseases including cancer. They have been successfully used in managing diarrhea, food allergies, and inflammatory bowel disease.

For centuries, different cultures have all had their own versions of fermented foods. These cultural treats are not simply tasty, they served a purpose – mainly that of preserving foods before there was adequate refrigeration, and for travel. However, whether by design or by accident, these foods turned out to have some incredible health benefits.

When a person’s gut microbiome becomes damaged or is otherwise thrown out of balance, conditions are ripe for disease formation. With cancer specifically, science is now uncovering how a compromised microbiome can unleash a cascade of system failures throughout the body that, in many cases, leads to tumor growth and full-blown cancer.

←
Previous
Can Brisk Walking Keep You Younger? A New Study Says Yes
→
Next
Autophagy: A Double-Edged Sword for Cancer