You are here: Home / Cancer Treatments / TTAC Book Excerpt: Hyperthermia and the Power of Heat 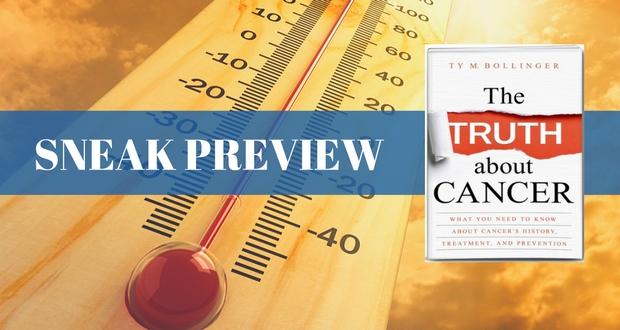 You’re probably already familiar with what happens when you contract a serious illness and your body goes into hyper drive by reacting with a fever, or high temperature. This hyperthermic response is the body’s way of naturally fighting the infection, and contrary to popular belief, it shouldn’t be minimized with ibuprofen and other drugs because it’s a good thing, despite being uncomfortable.

As it turns out, hyperthermia is also beneficial in the treatment of cancer. In 1893, Dr. William B. Coley discovered how the body’s hyperthermic response to bacteria can also help kill cancer cells. He purposely injected bacterial toxins into the tumors of 10 cancer patients and watched as their bodies responded with fevers, effectively killing the tumors.

A later study from Germany replicated this by demonstrating that Coley’s toxins, which are now referred to as mixed bacterial vaccine (MBV), helped cure advanced-stage non-Hodgkin lymphoma, resulting in a 93 percent remission rate as opposed to a dismal 29 percent remission rate among controls who received chemotherapy, and such research is continuing.

The use of induced hyperthermia in anticancer therapeutics is a rapidly expanding field, yet its effective application has been around for more than 100 years. In 1927, Julius Wagner-Jauregg was awarded a Nobel Prize for his work in hyperthermic therapies, but how many people do you know today who are utilizing it in the fight against cancer?

It’s a shame, really, because hyperthermia is a highly effective way to kill cancer cells. They only need to be heated to about 108 degrees Fahrenheit for roughly one hour in order to die. Healthy cells, on the other hand, die at a much higher temperature, so this heating process is completely safe and 100 percent selective, destroying only malignant cells. Even better is the fact that this gentle heat promotes blood vessel dilation around healthy cells, improving their function − this while knocking out cancer cells with ease.

Because cancer tumors are tightly packed with very little circulation, heating them in order to kill them just makes logical sense. And microwave energy is one powerful way to do this, as cancer tumors have a high water content. The beauty of microwave energy, as Dr. Alan J. Fenn, an electrical engineer at the Massachusetts Institute of Technology, found throughout his research, is that it’s adaptive. This means it can be concentrated directly into a tumor without harming other tissues, which seems to be a pattern among alternative cancer therapeutics.

But there are many other ways to induce hyperthermia, including full-body submersion into hot water, ultrasound, and one particular modality that seems to be growing in popularity at an accelerating rate: infrared saunas. Infrared energy penetrates the skin and pulls out toxins while simultaneously heating the body’s internals. And depending on which end of the infrared spectrum is used − near, mid, or far − heat energy can have varying beneficial effects.

Here’s what renowned oncologist Dr. Josef Issels, once stated about the power of heat: “Artificially induced fever has the greatest potential in the treatment of many diseases, including cancer.”

This is quite the powerful statement − and by a cancer doctor, no less! But it’s true, and there are several important reasons why.

First, hyperthermia helps eliminate from the body lingering toxins that contribute to cancer. Hyperthermia also helps improve circulation, improving the flow of oxygen to cells while flushing acidic waste from their structures. And finally, hyperthermia kills cancer cells on contact by heating them to a temperature beyond what they can handle.

Some cancer clinics utilize hyperthermia machines like the BSD−2000 Hyperthermia System in conjunction with traditional therapies like chemotherapy and radiation. One example is the BSD Medical Corporation based in Salt Lake City, Utah, which obtained a Humanitarian Use Device to use with the BSD-2000 in the treatment of cervical carcinoma. 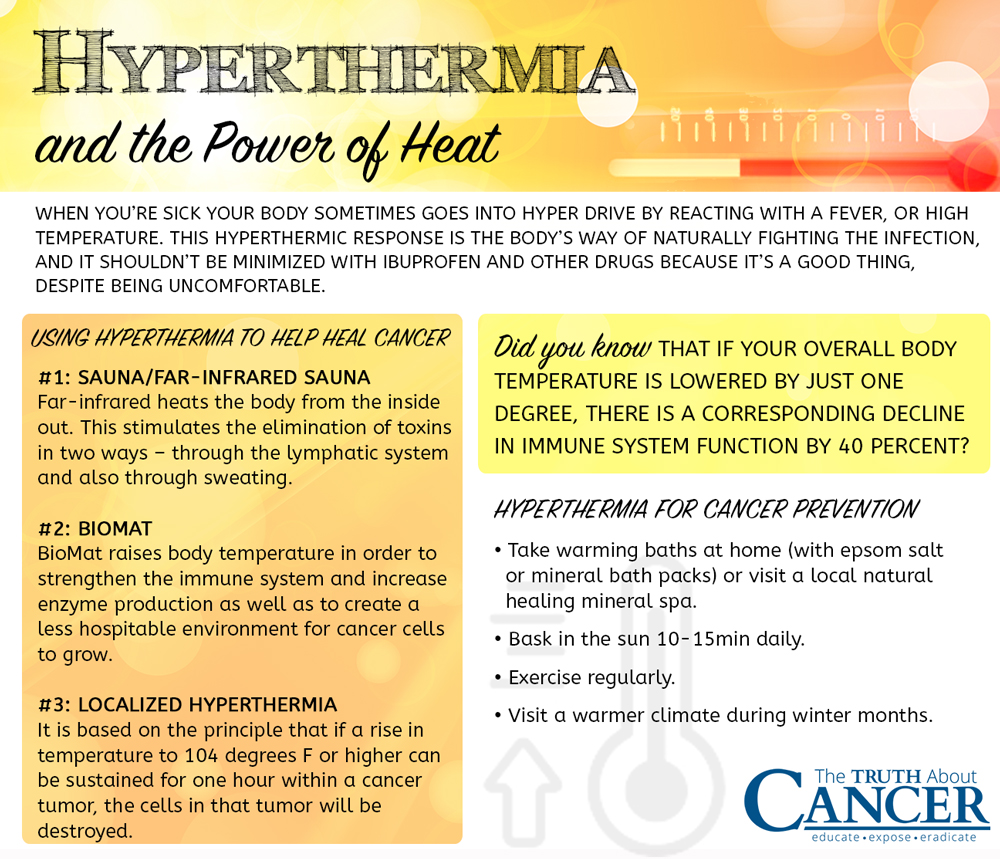 I’m of the persuasion that there are much better ways to utilize hyperthermia without tying it in with radiation and poison. But unfortunately for Americans, it’s difficult to find such treatment options without going overseas to places like China and Germany where innovative approaches to its use are welcomed rather than scorned.

I will say that hyperthermia is by no means a stand-alone treatment for cancer because it doesn’t possess the ability to boost immune function, a key component of the healing process. The only way it can is by combining it with a powerful nutrition program. The Hope4Cancer Institute recommends adhering to a customized, holistic nutrition program that centers around things like getting the proper amounts of macronutrients and micronutrients. This can involve juicing, fermenting, and sprouting nutrient-dense foods, as well as making sure that you’re getting plenty of antioxidants, whole-foods based vitamins and minerals, complex carbohydrates, protein, healthy fats, and of course, clean water.

I’ll leave you with this final quote from Parmenides, the famous Greek physician who more than 2,000 years ago demonstrated a solid understanding of heat therapy and its importance in warding off disease: “Give me a chance to create fever, and I will cure any disease.”