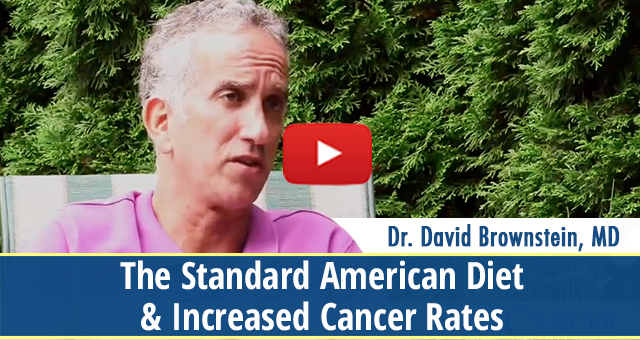 Dr. David Brownstein: Let’s go back to diet. I call this the basics. Basic number one is: let’s eat a better diet. When we were growing up, we learned in elementary school the food pyramid. The food pyramid showed that we should eat the majority of our food as grains. I remember there was a big loaf of bread there and crackers and grains were down in that big part of the food pyramid.

Fats and oils were up on top and it said, “Use sparingly.” Well, I could tell you we followed that food pyramid since it was introduced, I believe, in the early 1970s or late 1960s. And, the consequences of us, the American people, following this food pyramid was that we ate more grains, we limited our fats and oils in our diet, we switched our fat intake from primarily animal fat products to using polyunsaturated vegetable oils like corn oil and soybean oil and some other oils that are commonly sold in the grocery stores.

Dr. David Brownstein: It makes people sad and it makes people fat and makes people diabetic. Certainly, once diabetes comes into play, cancer and other illnesses follow suit as the blood sugar goes up, since cancer cells require blood sugar to function and to rev their metabolic rate.

Ty Bollinger: So, Dr. B, you just mentioned the “SAD” American diet; the fact that we got the pyramid with the grains and the oils at the top, very few, use sparingly. What should a health food pyramid look like?

Dr. David Brownstein: Well, in one sense, maybe we could flip the food pyramid on its axis and make the grains “use sparingly,” because grains turn into sugar very quickly. I frequently tell my patients to limit grains in a diet and to use a lot more fats in their diet, because fat slowly releases into the body.

There are carcinogenic studies with pesticides. If we get enough of them in our body, and certainly with the hormones they’re feeding the animals and the conventionally raised animals, that’s a big problem. I think that’s one of the things that’s causing one in seven women to have breast cancer and one in three men to have prostate cancer.

Ty Bollinger: Just off the top of my head, I’m thinking… so the hormones in the meats, the chickens… could that be one of the reasons that so many young girls are going into puberty so early?

←
Previous
Restore Gut Health with These 4 Essential Oils
→
Next
How Do You Get Cancer? (video)