You are here: Home / Global Health News / Who Is Running the WHO? (part 1) 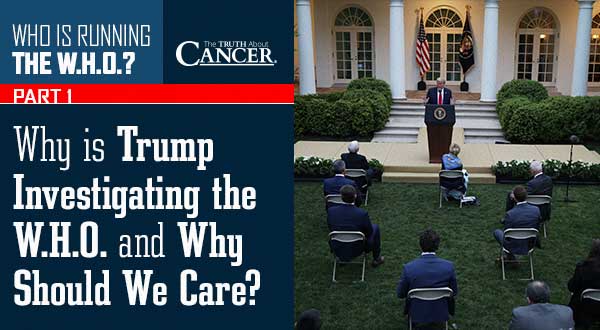 Part 1: Why is Trump Investigating the WHO and Why Should We Care?

Over the decades, the World Health Organization has become the main “go-to” source for global health information, statistics, and advice. However, during the COVID 19 crisis, the WHO has been in the news for a different reason. On April 7, 2020, President Donald J. Trump announced that he will suspend funding for the WHO pending an investigation into the UN-connected organization. In this series, we will begin to scratch the surface of some of the issues surrounding the investigation.

Basis of the WHO Investigation

“The WHO…they called it wrong,” said President Trump in his April 7th Coronavirus briefing regarding the WHO’s inactions in the early months of COVID-19. “They missed the call. They should have called it months earlier. They would have known. They should have known. And they probably did know. So we will be looking into that very carefully, and we are going to put a hold on money spent to the WHO.”

“America and the world have chosen to rely on the WHO for accurate, timely, and independent information to make important public health recommendations and decisions,” Trump said at an April 14, 2020 press conference. “If we cannot trust that this is what we will receive from the WHO, our country will be forced to find other ways to work with other nations to achieve public health goals.”

At a May 1, 2020 briefing, Press Secretary Kayleigh McEnany clarified the administration’s stance towards both the WHO and China.

“It is no secret that China mishandled the situation,” said McEnany. “Just a few examples for you: they did not share the genetic sequence until a professor in Shanghai did so on his own the very next day. China shut down this lab for ‘rectification.’ They slow-walked information on human-to-human transmission alongside the World Health Organization and did not let U.S. investigators in at a very important time.”

Even media sources who are normally critical of Trump admit that the WHO’s stance in line with China is investigation-worthy.

The WHO and China in the Early Days of COVID-19

The first official reports of a “mysterious outbreak” came out of Wuhan, China, on December 30, 2019, when authorities there confirmed 27 cases of “viral pneumonia.” At the time, these officials connected it to exposure at the Huanan Seafood Wholesale Market and insisted that it was not transmissible by human-to-human contact.

According to a report in The Lancet, however, human-to-human transmission occurred as early as December 1, 2019. By the third week of December, doctors in Wuhan began noticing clusters of illness. Medical staff were getting sick, and hospital admissions were increasing by the end of December. All of this was adding up to a strong likelihood that, whatever the illness was, it could be transmitted through human-to-human contact.

Finally, on December 31, the Chinese government informed the WHO of the “viral pneumonia,” yet the Wuhan Municipal Health Commission still concluded that there was no evidence of human-to-human transmission.

On January 1, the Wuhan Public Security Borough put eight doctors into custody for spreading “rumors” about a “SARS-like condition.” One of the doctors was the now-deceased ophthalmologist Li Wenliang, the first Chinese doctor to bring attention to the seriousness of the illness on social media.

Despite the obvious contradictions between the official Chinese narrative and mounting evidence to the contrary, the WHO did not investigate further. This is odd considering that the WHO had toughened its rules regarding cover-ups in 2005. Since the SARS outbreak of 2002-2003, the WHO has had broader power “to investigate threats using non-state sources of information such as civil society groups.”

Apparently, WHO leadership did not feel that there was a good reason to use this power in the early stages of the Coronavirus pandemic.

An official WHO statement put out on January 8th says that: “Preliminary identification of a novel virus in a short period of time is a notable achievement and demonstrates China’s increased capacity to manage new outbreaks.”

The WHO also condemned countries who chose to enforce travel bans from China early on. The United States began restricting travel to the United States from the Hubei province in late January.

“… the WHO advises against the application of any travel or trade restrictions on China based on the information currently available,” the January 8th statement said.

Then, on January 18th, over a month after the first Coronavirus patient was discovered in Wuhan, the WHO tweeted that “[p]reliminary investigations conducted by the Chinese authorities have found no clear evidence of human-to-human transmission of the novel #coronavirus (2019-nCoV) identified in #Wuhan, #China.”

It would come out later that the WHO also ignored communication from Taiwan in late December, which urged them to look into a rash of illnesses connected to individuals traveling from Wuhan to their country.

Why Should We Care About the WHO?

Even if one comes to the conclusion that there was (and potentially still is) some kind of collusion between the WHO and China regarding Coronavirus, the question can still be posed: Why should we care?

Putting aside political ideology and even economic and military threats coming from the superpower to the east, we can answer this question simply by considering the significant role that this supposedly-neutral organization plays in global health policy. The standards and recommendations it puts out to the world often form the basis for public health policies and programs. In the United States, these recommendations influence federal health policy. They also trickle down to the state, county, and local level. Ultimately, these recommendations affect hospital staff, doctors, and patients.

The WHO constitution defines the WHO as “the directing and coordinating authority on international health work.”

According to a report conducted by Yale University in 2009, “The World Health Organization (WHO) plays an essential role in the global governance of health and disease; due to its core global functions of establishing, monitoring and enforcing international norms and standards, and coordinating multiple actors toward common goals.”

When it comes to establishing needed parameters by which to negotiate the tricky terrain of global health emergencies, the WHO’s power comes into sharp focus. For example, the WHO is the organization responsible for issuing Phase 1-6 warnings for local, regional, and global communicable disease outbreaks.

Without a WHO pandemic declaration, emergency services, supply production, and assessment worldwide cannot occur. The WHO officially announced that Coronavirus was a “pandemic” (Phase 6) in mid-March, nearly three months and half months after the very first Coronavirus case was discovered in Wuhan.

The WHO is also the body responsible for developing and implementing the coding systems, known as the International Classification of Diseases (ICD), that hospitals and health centers all over the world use to determine course of treatment, insurance reimbursement thresholds, worldwide statistical information, and cause of death for patients.

←
Previous
The Abduction of Liberty (part 1)
→
Next
Who Is Running the WHO? (part 2)