Now, I want to talk to you about plant medicine. Why? Well, because that’s my passion. That’s what I know the most about. Cannabis, I’ve talked a lot about cannabis. At this conference here so many people have come up to me already so interested in cannabis, as am I. So we’ll dive into that.

So this endocannabinoid system, what does it do? It’s all about maintaining a balance and a harmony in the body. So there’s signaling pathways that go to every major system, every major organ. Which if you can connect the proper cannabinoids there, then you can develop proper body responses to different challenges that are coming in, which is why normally in a plant kingdom what I’ve seen is this group of plants here is for balancing blood sugar, this for immune system, this for pain, swelling, inflammation, this is for energy. So you can just see the hormonal balancing plants. But cannabis is different because endocannabinoid system that once you introduce the cannabis there, you’re seeing all kinds of things happen, Alzheimer’s, with MS, with epilepsy, with seizures, with Parkinson’s, with cancer. So it affects all of these systems, every system, physiological and therapeutic. Here’s a little study, the endocannabinoid system controls the growth and metastases of malignant cells. How about that?

So with the cannabinoids, most people know THC. Most people know CBD. Many people are learning about CBC, CBG, CBN. There’s 140 known cannabinoids. Did you know that? 140. Most the attentions on THC and CBD, but there’s 140. And then each of these pretty much has an acidic form as well. So you have a THC and you’ve got THCA. Now, THC is known as the psychoactive component in cannabis. But did you know when the plant grows, it’s not psychoactive? The plant grows, it’s producing all of its cannabinoids in an acidic form, THCA, CBDA, CBCA, et cetera. So it’s only once it’s heated or decarboxylated, they call it, where you break a little carbon bind when it’s heated, that it becomes psychoactive. So if you smoke it, you’re heating it. If you cook it in a brownie, you’re heating it. If you’re processing it in an extract and using heat, then you’re converting the THCA to THC.

We used to call that activating it because it seemed like, well, that’s where the active component is once you heat these cannabinoids. Now we know that the acidic form of the cannabinoids are extraordinarily therapeutic as well. So when you’re looking at plant and plant products with the cannabis, just know that it’s a lot more than CBD and THC. So hopefully when you’re at a dispensary, or you’re getting your product, you’ll be able to at least have the eight or ten major cannabinoids there because they all have therapeutic benefit. The way they modulate with each other, this entourage effect, is what determines the real outcome.

Then I talked about the terpene component as well. A terpene is essentially an essential oil, so it’s what’s going to give it the flavor or the taste. As many of you know, cannabis comes in a lot of different flavors. You have some that’s kind of citrusy, some that’s kind of lavendary when you’re smelling it, some of it smells kind of skunky, some smells like diesel fuel. These are the terpenes that you’re smelling. Right? Like the terpene in a flower, that’s the terpenes where you’re getting the smell. Cannabis produces terpenes for its own life purpose. It produces terpenes to create these smells one, to attract pollinators and to defend itself from predators.

So depending on where the plant grows, it’s normally how those terpenes express themselves. So when you’re growing in Afghanistan or in India where it looks like cannabis originated, and everywhere mankind moved he took seeds with him because it’s so important for food, for shelter, for medicine, that when you’re growing it in Columbia or Thailand, you have different environmental conditions. Over several generations, the plant will adjust to that and produce different terpene profiles because the pollinators and the predators are different, so you get different terpene profiles coming from different plants.

And so the cannabinoid and terpene benefits that would associate to the topic that we’re talking about here is, one, pain relief, pretty much across the board. And we got plenty of studies that show that it actually slows and can stop the migration of cancer cells, you know, the metastases, and it creates an apoptosis. This is something a lot of people don’t realize, which is encouraging a natural cell death. It can actually kill cancer cells. At the same time, it protects the healthy cells, so that’s not normally what happens when you’re killing cancer cells. Normally, it’s some very toxic things that are doing that. So what we’re learning is there’s a different way to go here, so there’s massive amounts of research beginning in this arena to help identify the profile of cannabinoids and the chemovars and/or the combination of chemovars that are going to give us our best results because you want these terpenes—

The terpenes, the essential oils by themselves have a therapeutic value. So you’ve got pinene, myrcene, lemonene, bisobolol, linalool, all of these specific terpenes, or essential oils, have therapeutic benefits on their own. And the entourage effect just means when you’re using the full-plant extract where all of these terpenes and naturally occurring cannabinoids are modulating naturally that’s when you’re going to get the best benefit. There’s already studies that are demonstrating that. So you’re getting a better effect with the entourage effect of a full-plant extract over an isolate of THC or an isolate of CBD or an isolate of any of the other cannabinoids. So this is a fascinating area.

If you liked this video, you’ll LOVE this.

Go here to get access to the latest natural cancer breakthroughs from every single life-changing presentation at TTAC LIVE 2019! 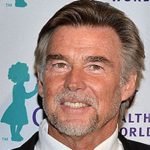 "Amazon" John Easterling, founder of Happy Tree Microbes, spent over two decades in and out of the Amazon rainforest planting medicine. He researched and brought to market a variety of Amazonian medicinal and therapeutic plants after formulating them in America using advanced technological methods. In 2008, Easterling married singer/actress Olivia Newton-John. Together, they helped spread the word about preserving the rainforest as well as the health values found in its botanicals plants. They also serve on the board of the Amazon Center for Environmental Education and Research (ACEER) organization to help the indigenous people of the Amazon gain ownership and title to their land.