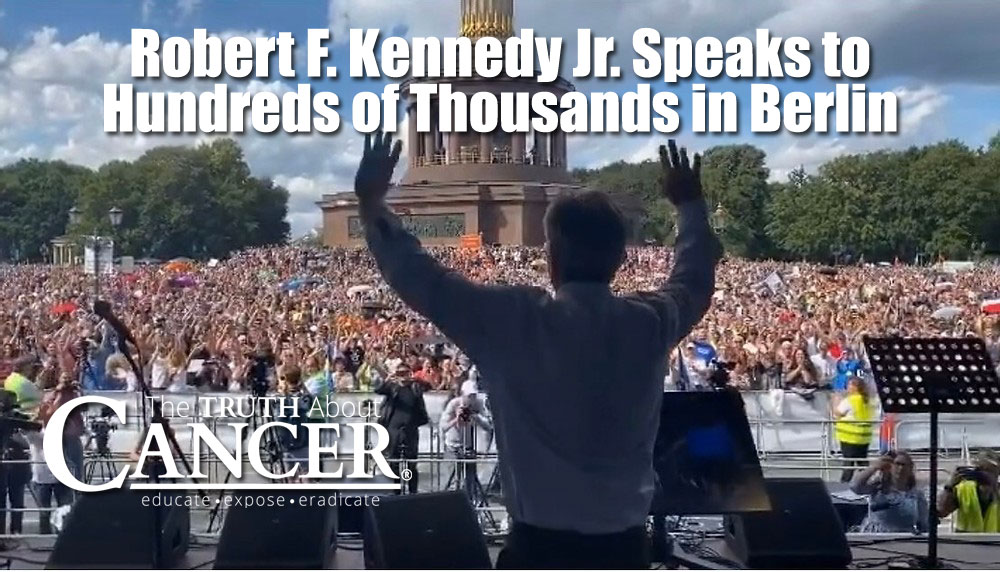 On 29 August 2020, our good friend and brother in the fight for freedom, Robert F. Kennedy Jr., whom we affectionately call “Bobby,” spoke to hundreds of thousands of freedom-loving people in Berlin, Germany.

In the same fashion that President Kennedy denounced the repressions of individual freedom by communist regime, Bobby spoke to what is being called “the largest crowd in German history” about the COVID plan-demic, the rise of global surveillance, Big Pharma, and bio vaccines coming soon.

During his opening remarks, Bobby said that the corrupt American mainstream media are telling people he came to Berlin “to speak to about five thousand Nazis.”

Speaking to hundreds of thousands of freedom-loving patriots, Bobby remarked:

We want health officials who don’t have financial entanglements with the pharmaceutical industry, who are working for us, not Big Pharma.”

The pandemic is a crisis of convenience for the elite who are dictating these policies,” said Kennedy Jr., who praised the huge Berlin crowd for being on the frontline of the fight against global totalitarianism.

It’s a mystery to me that all of these big important people like Bill Gates and Tony Fauci have been planning and thinking about this pandemic for decades. And yet, now that it’s here, they don’t seem to know what they are talking about.”

They are making it up as they go along. They are inventing numbers. They cannot give us a PCR test that actually works. They have to change the designation of Covid on the death certificates to make it look more dangerous. The one thing they are good at is pumping up fear.”

An inspiring number of patriots and freedom lovers in Berlin shouted “We Don’t Consent”… “Freedom Not Fear” … “No to Masks in Schools” … and other inspiring slogans.

Bobby explained that “the only thing a government needs to turn people into slaves is fear.”

QUESTION: Where is the “lame-stream” media on this? Why isn’t this front page on every newspaper and the top story on every TV news program? When Joe Biden stumbles through 2 sentences without forgetting what he’s saying and actually completes a logical thought, it’s all over the news. But when the nephew of President John F. Kennedy speaks to hundreds of thousands in the same city where his uncle gave a historic speech 57 years before … crickets!

Since the “official story” about COVID is that we should all be very very very very afraid, the message of empowerment and freedom MUST be squelched! That’s why the MSM isn’t covering this amazing story about a true patriot, Robert F. Kennedy Jr., speaking to the largest crowd in German history! They are sellouts!

But keep the faith and keep fighting! We will win!

Freedom will triumph over tyranny!