You are here: Home / Cancer Prevention / Is Agaricus Blazei Murill a Key Player in a Cancer-Free Life?

[Editor’s note] This post was originally published in March 2017. It has been updated and republished in July 2019.

Originating from Brazil, a wild and almost fairy tale-esque mushroom has earned the sacred title of “Cogumelo de Deus, or “Mushroom of God” in Portuguese.

That’s because, in addition to its robust characteristics and unique structural beauty, this mushroom is a literal God-send in a health-promoting sense. In fact, Agaricus Blazei Murill is widely regarded both locally and around the world as a gift from nature that brings both health and longevity to those who partake of its wonder.

This amazing, South American fungal species is considered so potent that growers halfway around the world in Japan and elsewhere cultivate it for use in the treatment of a number of health conditions. Extract of Agaricus has also been studied and shown to exhibit generalized immunomodulatory effects, meaning it helps to support healthy immune function.

Agaricus hails from a long tradition of functional medicine, both historically and in the modern world, as do a number of other fungi species. In other words, it’s proven itself by withstanding the test of time. My belief is that science will continue to uncover even more about the full health-supporting potential of Agaricus and other medicinal mushrooms.

Agaricus, Polysaccharides, and the Mystery of Prolonged Youthfulness

Among the most potent of the mushroom species, Agaricus contains up to 27% polysaccharides, the simple sugars that make up the long molecular chains of its complex carbohydrate structure. Some polysaccharides are responsible for storing the energy we gain from eating food, while others are in charge of maintaining the structure of cells.

In essence, polysaccharides are what the body uses as its primary source of energy: the starch varieties like amylose and amylopectin serving as short-term energy stores, and the glycogen component, manufactured primarily in the liver and muscles, serving as a long-term energy store. Nearly every system of the body relies on these two types of polysaccharides as fuel, a lack of which can lead to serious health problems of the heart, brain, reproductive system, blood, and more.

One of the reasons why Agaricus landed itself in the research spotlight as far back as the 1970s is its strong association with low rates of geriatric illness amongst the elderly inhabitants of Piedade. This is the mountain village in Brazil where Agaricus Blazei was believed to have first originated. Researchers observed that the people who consumed Agaricus tended not to develop serious chronic illnesses as they progressed into their sunset years.

Beta-glucan polysaccharides in particular are known to possess that unique immunomodulatory potential that I mentioned earlier, and they perhaps deserve the most credit for exhibiting the anti-infection and anti-tumor activities often attributed to polysaccharides in general. Polysaccharides are one of the driving factors behind the concept of “mushroom power.” Think Super Mario Brothers mushrooms that give your character a “size-up” strength boost − and they just might, for all intents and purposes, help reveal the mystery of prolonged youthfulness associated with medicinal mushrooms like Agaricus Blazei.

The reported day-to-day health benefits of Agaricus include relief from chronic fatigue (more energy!), blood sugar balance, improved mood, lowered blood pressure, increased libido, and heightened immunity. The Memorial Sloan Kettering Cancer Center also cites Agaricus as a remedy for conditions like arteriosclerosis (the thickening and hardening of arteries), hepatitis, dermatitis, hyperlipidemia (elevated triglyceride levels), high cholesterol, and obesity. But where Agaricus really shines in the scientific literature is in the area of cancer, for which its resume of efficacy is nothing short of impressive.

The two primary ways in which Agaricus is reported to stave off cancer is through immunopotentiation, an enhancement of the immune response; and direct inhibition of angiogenesis, the process by which cancer tumors form new blood vessels to supply them with food. By way of these two modes of action, Agaricus has shown incredible promise in the realm of anti-cancer research.

Studies have shown that Agaricus may be beneficial in treating various types of cancer, including drug-resistant human hepatocellular carcinoma, non-lymphocytic leukemia, and prostate cancer, among others. Its unique ability to improve the activity and function of natural killer cells, which go after cancer cells in order to destroy them, is one of the reasons why Agaricus possesses this capability. That and the mushroom’s natural ability to stimulate the body’s innate immune system.

Here’s what researchers from Norway concluded published in the journal Advances in Pharmacological Sciences as to why Agaricus is so effective when treating cancer, as well as a range of other chronic diseases:

“The explanation is the mushroom’s engagement of innate immunity, which is ‘broad-spectered’…In addition, there may be a general anti-inflammatory effect of AbM (Agaricus), which may be therapeutical for inflammatory bowel diseases and augment the mushroom’s antitumor and antiallergy/antiasthma properties. Hence, AbM extract may show promise as a prophylacticum and as an additive treatment for quite different and some serious diseases.” 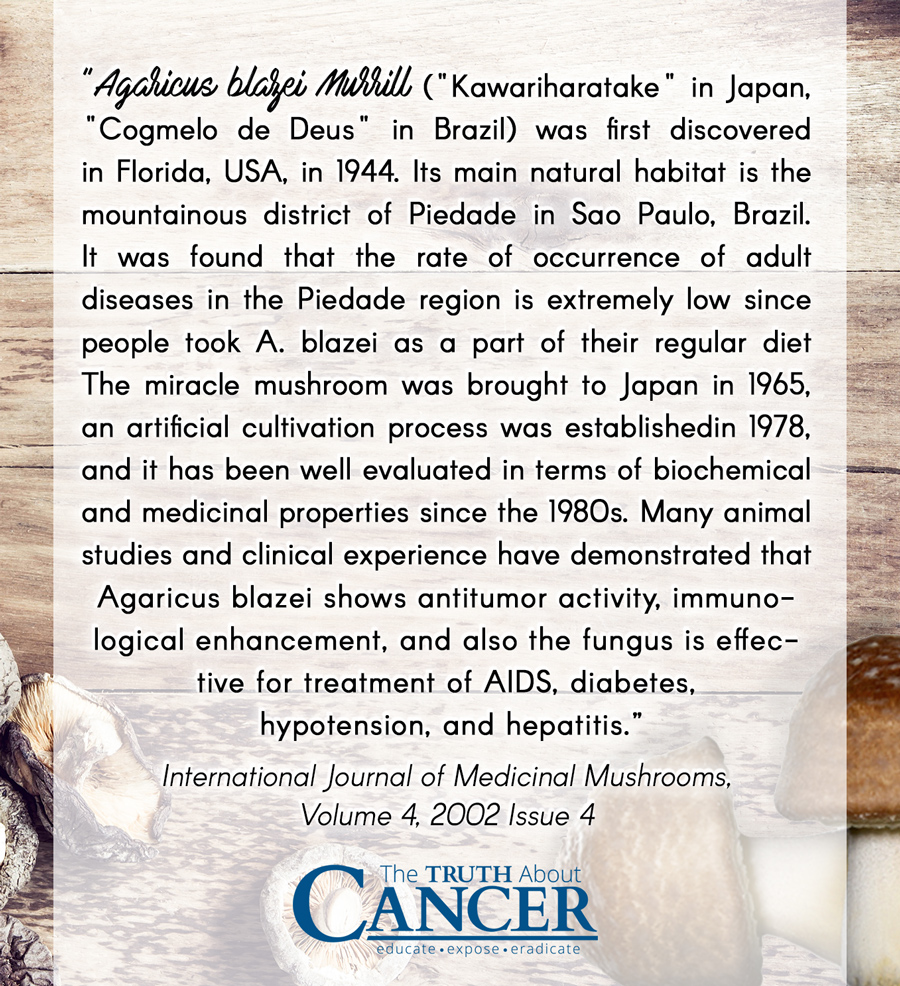 Agaricus: A Safe and Effective Solution for Longevity?

When taking Agaricus or any mushrooms as a dietary supplement, it’s recommended that you do so under the supervision of a qualified physician or health care provider, and that you choose only quality suppliers that thoroughly test their products for potency and possible contaminants. While there have been a handful of cases in which patients taking Agaricus showed signs of liver damage, a causal link proving the mushroom as the culprit has never been established. If anything, it was likely contaminated supplements rather than the mushroom itself that caused such problems.

Agaricus also contains a compound known as “Brefeldin A” that studies have shown exhibits estrogenic activity. However, research published in the Journal of Agricultural and Food Chemistry reveals that, despite its estrogenic gene-expression profile, Brefeldin A does not show growth-stimulating effects in breast cancer cells. Scientists have actually dubbed it a class of “silent estrogens” and are thus not a significant concern health-wise, so long as the mycelium is first removed from the mushroom’s medicinal fruiting body.

Overall, Agaricus extract made from the fruiting body of the mushroom is considered a safe and effective health-supporting supplement that exhibits little-to-no potential side effects, and that has an extensive track record of efficacy in many applications. Its uses are both supplemental and primary, meaning it’ll remain a strong candidate both as an adjunct to traditional medicine and one of several mushrooms of choice in functional food therapy.

←
Previous
The Power of FATS, Vitamins, and Supplements to Fight Cancer (video)
→
Next
[QUIZ] How Much Do You Know About Anti-Cancer Diets?