You are here: Home / Cancer Causes / What Angelina Jolie’s Doctors Didn’t Tell Her about the BRCA Gene Before Her Double Mastectomy 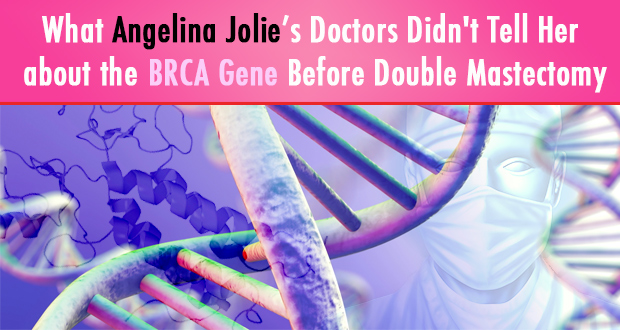 In 2013, actress, filmmaker, and human rights activist Angelina Jolie made headlines by announcing that she had undergone a preventative double mastectomy. The reason: A family history of breast cancer (her mother had died of it) and what she called a “faulty gene,” referring to the BRCA gene (BRCA 1).

Jolie is a talented and extremely intelligent woman. I cannot judge her personal decision to take the course of action she did when it came to her own health. A woman’s decision when it comes to breast cancer is a personal one and must be respected. When that woman is a celebrity and decides to discuss the matter in a public forum using medical generalities that are debatable at best, this becomes cause for concern, however.

To me, her decision begs the question ─ were Ms. Jolie’s doctors telling her the whole story about BRCA1? I suspect that they did not.

If they had told her the whole truth, would she have still made the decision that she did?

The Truth: BRCA1 and BRCA1 Gene Mutations DO NOT Inevitably Lead to Breast Cancer

Angelina Jolie’s decision to remove both of her breasts was based on the advice of medical professionals — doctors, surgeons, oncologists (no doubt she had access to the best of them). In an Op-Ed piece for the New York Times, Jolie stated:

The above comment leads one to believe that BRCA1 represents a single defect, and a possibly deadly one at that. This is only a half truth. First of all, BRCA1 and BRCA2 (which stand for Breast Cancer 1 and 2) are tumor suppressor genes. They produce a protein which assists in DNA damage repair caused by, according to the U.S. National Institute of Health, “natural and medical radiation or other environmental exposures.” If there is a mutation in this gene, then what is actually happening is that the gene is not doing its job. I.e. the DNA damage is not being repaired, thus leading to a higher risk of cancer.

The second clarification that needs to be made is the statistical determination that Ms. Jolie mentioned in her Op-Ed: “Those with a defect in BRCA1 have a 65 percent risk of getting [breast cancer], on average.”

Two factors cloud this oversimplified message that conventional medicine is promoting en masse to the general public. Firstly, according to the National Cancer Institute, to date there has been no long-term general population studies regarding BRCA1 or BRCA2. Secondly, there are literally thousands of possibly BRCA 1 and 2 gene mutations, many of which actually reduce the risk of breast cancer. According to a 2011 study conducted by the University of California, San Francisco, “It seems that some polymorphisms may actually have a protective effect.”

Gene Expression is NOT the Largest Determining Factor for Breast Cancer

The days when a person’s DNA was their destiny is over. Increasing study into the area of epigenetics is revealing the overwhelming influence of environmental factors in the proliferation of disease. Toxic exposure and toxic lifestyle choices, including stress, may account for as much as 95 percent of the factors associated with disease of all kinds.

In fact, a study published in the prestigious New England Journal of Medicine found that the trauma associated with a cancer diagnosis can cause a 26-fold increase in “adrenaline-mediated multi-drug resistance” and, subsequently, heart-related deaths. More relevant to this discussion is the fact that only 2 percent of women in the US who have a family history of breast cancer may test positive for gene mutation. According to the Centers for Disease prevention, “In some families breast cancer or ovarian cancer will occur due to inherited mutations in genes other than BRCA1/2. However, this is uncommon.”

When it comes to statistical causes for cancer ─ including breast cancer ─ environmental toxins beat genetics, hands down. Yet, when was the last time a major news source promoted this fact?

This fact is probably the hardest one to swallow, but it is also the most important to understand and never forget. First and foremost, conventional medicine is a business! As such, profit, not people, often reigns supreme. Shortly after Ms. Jolie made her announcement, stock in the medical technology company Myriad Genetics climbed significantly. This company owns patents on BRCA 1 and 2 genes for both men and woman, and has repeatedly blocked necessary and unbiased testing to determine the validity of BRCA-breast cancer connection claims.

It is estimated that there have been approximately 1.3 million women in the US who have been over-diagnosed and over-treated for apparent “breast cancer” over the last three decades. How many millions of dollars have pharmaceutical companies and the medical industry in general made during that time? Firstly on “preventative” therapies and treatments, including surgery, chemotherapy and radiation. And secondly on breast reconstruction materials and procedures after the fact, some of which has been proven to cause cancer themselves! How many breasts, and how many lives, could have been saved over the last 30 years?

Epigenetic studies have proven time and time again that gene expression can be turned off and on by proper nutrition and the lessening of the toxic load. The hard science is in and the evidence is overwhelming. Ms. Jolie, I respect your personal decision to do what you felt was right for your own body. I only wished that you would have gotten all of the facts about BRCA 1 and 2, and about breast cancer in general, before you promoted this course of action to the hundreds of thousands of women worldwide who look up to you as a role model and may follow your lead.