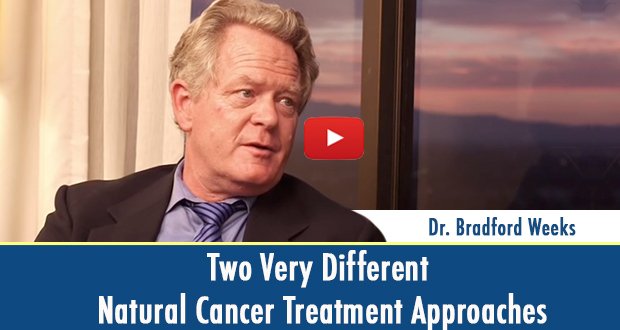 Dr. Bradford Weeks: Well, the first is really to ask the patient why he or she wants to live. And it’s shocking, Ty. I think probably at least over 50 percent of my male clients, let me say my former patients. Sixty percent of the males, once the wife is out of the room, they say to me something like “Look doc, with all due respect I really don’t want to live anymore. I certainly don’t want to bankrupt my family. I’ve had a great life. Everything is good. I don’t want to be a burden. I’m done. I’m only here because my wife wants me to be here.”

I respect that because these are guys who know from friends and so forth that the next five years of conventional cancer treatment is going to be a debacle. They don’t want to go through that. My first job is to try to get them inspired. If they could see a way through, where we could focus on helping their body be healthy, would they buy-in?

What I have to tell you is most patients have given up by the time they see an oncologist. They don’t believe they’re going to do well. They don’t think it’s possible and they know they can’t afford it and they’re dreading it. So, if the oncologist doesn’t put on a psychiatrist’s hat and say “How are you feeling about this Mr. Jones? Or “What would you like to do Mrs. Jones?” and not get those thoughts and ideas out on the table, then you’re just wasting time.

So the first [cancer] “treatment” really is to have a relationship with a patient where they can really share their concerns. And then you can say, “I’m not God. I can do my best. What are the criteria? You don’t want pain or this or that.” And you can formulate something. I have to tell you, it is shocking what oncologists get away with when they simply lay out a plan, they don’t really listen to NOs and they say the patient has no choice. You know it’s even worse with parents with their kids with cancer. So, the first treatment is really to have a relationship and try to learn what the patient wants. Now in the current way that medicine is practiced in America nobody has time for that kind of a discussion, but it’s critically important.

The second thing is I will ask my clients why do they think they have cancer. A lot of them will say “I don’t know.” So I say, “Well, why do you think you have cancer?” They will say “Well, I don’t know.” So I’ll say, “Well, why do you think you have cancer?” And they know I’m not going to stop until they tell me. And it could be that they feel like they’ve sinned. Or they could feel they could have some guilt or something. So then if one doesn’t exorcise, so to speak, that and help them understand that whatever they’ve screwed up in the past, their main commitment is what they can do today and going forward. Again, the best chemo drugs in the world aren’t going to be helpful.

You have to have people understand that it’s their life and help them feel empowered. You and I can appreciate the word enthusiasm means “God within” – En theos. If the patient can’t be enthusiastic about each day then that’s a big immune drain as well. It’s not about prolonging life and suffering. It’s about quality of life. You want to prolong quality and quantity. But I would like to encourage my medical colleagues, my oncologists to have those types of discussions with the patients. I just think it’s critically important. And then we deliver smart therapies.