You are here: Home / Featured Articles / The “Fountain of Youth” Herb That’s Prized in Ayurvedic Medicine 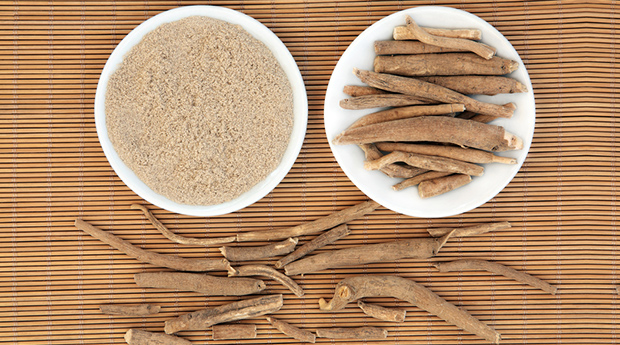 Legend has it that famed Spanish explorer Juan Ponce de León set sail not just to survey the New World, but to seek out the fabled “Fountain of Youth.” This was a mystical water source that primordial folklore promised could cure a man of all his ailments and keep him looking and feeling young forever if he simply sipped a splash of its crystal-clear deluge.

Ponce de León and his crew traveled to what we now know as Florida in search of this panacea. However, he was only to discover (with much disappointment), that this land of palm trees, sunshine, and year-round warmth provided no such elixir from any of its natural springs.

Like any famous tale, there’s probably more myth to the legend of Ponce de León’s excursion than actual fact. But historical records do show that almost all civilizations (both past and present) have revered the idea that somewhere out there is a cure-all for human conditions.

Whether it be miracle waters or some kind of “magic” herb… it is just waiting to be discovered by a brave and adventurous soul seeking it out for the benefit of humanity.

It’s a hopeful thought that, again, seems to be more the subject matter of an imaginative fantasy novel than the real world in which you and I live.

But what if I told you that a “Fountain of Youth”-type elixir does, in fact, exist?

Long prized as a life-extending “miracle” herb in Ayurvedic medicine, the plant I’m about to cover is arguably one of the most comprehensive healing substances known to man. And, I’m excited to share with you its many scientifically-proven health benefits.

Withania somnifera: An Adaptogenic, Rejuvenating Herb of the Highest Order

Known more commonly as ashwagandha or Indian ginseng, withania somnifera has long held a prominent place in Ayurvedic medicine. Its use dates at least as far back as 4,000 B.C.

The traditional Indian approach to healing involved using ashwagandha as a “Rasayana.” In Sanskrit this literally means “that which negates old age and disease.” The life essence, so to speak, of Ayurveda, and one of functional medicine’s most precious herbs.

The prefix “ashwa” translates as “horse,” the implication being that consuming this herb gives one the power of a horse. Ashwagandha’s many benefits include its narcotic, diuretic, aphrodisiac, anthelmintic, astringent, stimulant, thermogenic, and tonic properties. It also has benefits of adaptogenic nature. Adaptogens, in case you weren’t aware, are herbs that modulate the body’s stress response, adjusting hormones and other substances either up or down depending on what the body needs.

The stress hormone cortisol, for instance, can cause all sorts of health problems when left unchecked. Think irritability, weight gain, diabetes, and heart disease. The ashwagandha plant has the ability to normalize cortisol levels and protect the body from harm.

Ashwagandha is also powerfully rejuvenating, helping to energize the body, strengthen immunity, and balance hormone levels. All of these have the effect of making a person look and feel younger.

The Amazing Health Benefits of Ashwagandha

More than 200 studies reinforce the many known health benefits of ashwagandha. These include:

As you can see, the uniquely adaptogenic nature of ashwagandha makes it a potent remedy for nearly every facet of health that needs correcting or balancing.

Unlike pharmaceutical drugs and other therapeutic substances that directly alter a specific cellular function or gene expression in order to address a particular set of symptoms, ashwagandha helps the body to self-adapt. It does this in order to facilitate proper rest, energy production, metabolic function, hormone modulation and various other functions. 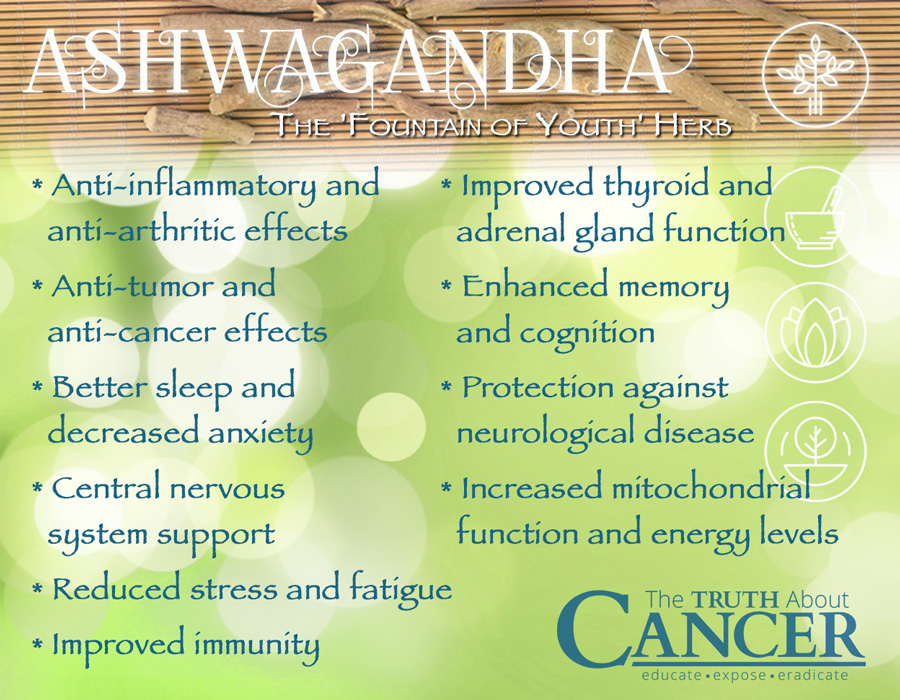 Ashwagandha is Among the Most Revered Ayurvedic Herbs

“Rasayana is described as an herbal or metallic preparation that promotes a youthful state of physical and mental health and expands happiness,” explains a study out of India looking at the historical prominence of ashwagandha in traditional medicine. “These types of remedies are given to small children as tonics, and are also taken by the middle-aged and elderly to increase longevity.”

As for ashwagandha’s relevance in the medicinal hierarchy, this same study declares that among the Ayurvedic Rasayana herbs, ashwagandha “holds the most prominent place.”

When it comes to cancer, ashwagandha has demonstrated powerful benefits in the treatment of cancer − including that of the lung and prostate.

Best Forms of Ashwagandha and How to Take it

The most biologically active form of ashwagandha is said to be Nagori ashwagandha, though wildcrafted varieties have a similar composition. It is complete with all the alkaloids, withanolides (steroidal lactones), saponins, fatty acids, amino acids, choline, and the various other anti-stress and immunomodulatory agents that make it such a powerful medicine.

Ayurvedic health experts recommend consuming this variety as a fresh powder made from the roots of the plant. However, the leaves, flowers, and seeds can also be beneficial when prepared for other purposes.

Since ashwagandha is an herb, and a relatively mild one at that, it can be taken regularly as part of a healthy diet. This is because it’s basically just a food.

And when I say mild, I mean that it provides gentle benefits in harmonious synergy with your body’s own biological processes, exhibiting minimal (if any), negative side effects. However, if you’re pregnant, it’s recommended that you take ashwagandha under the supervision of a qualified health practitioner, preferably someone well-versed in Ayurvedic medicine.

Traditionally, 5-10 grams of high-quality, organically-grown Withania somnifera root powder is mixed into a glass of warm cow’s milk. This is consumed once or twice daily for optimal benefits. If you consume cow’s milk, I would recommend an organic, grass-fed, raw variety gently warmed rather than cooked at high heat, as high heat will essentially pasteurize the milk and destroy its vital enzymes.

Alternatively, you can mix the powder into a warmed milk alternative (i.e. nut milk), blend it into a smoothie, or combine it with raw honey to form ashwagandha superfood “balls.”

Whatever method you can tolerate is adequate. Ashwagandha supplements made from pure root powder with no fillers are another great option.

The Chopra Center recommends taking ashwagandha at a dosage of 600 to 1,000 milligrams twice daily. Individuals who suffer from insomnia and/or anxiety can, again, combine the powder with a warm beverage. This can be milk, a milk substitute, or even water. Consume before bed for optimal results.

If you’re really serious about aging with grace, balancing your hormones, minimizing stress, boosting your energy levels, and improving your neurological health with ashwagandha, it’s important not to forget about your diet. The fewer cheap carbohydrates, processed grains, and refined sugars you eat, the better. And remember… plenty of healthy fats, nutrient-dense proteins, and fiber-rich foods are a must.