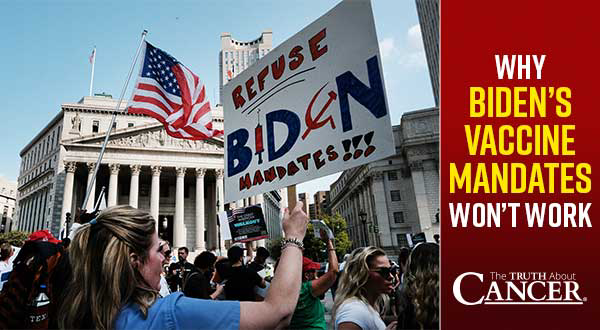 “We’ve been patient. But our patience is wearing thin.”

The order is part of a 6-pronged strategy that includes measures like increased testing and required masking. And while the federal government has already mandated vaccination for federal employees, the new executive orders signed on Thursday will solidify vaccine requirements for all employees of the Executive Branch and any contractors that do business with the federal government.

Note that the legislative and judicial branches – including congress and anyone who works for them – would be exempt from the requirement.

But Biden is also calling for the Department of Labor to issue an emergency order requiring businesses with more than 100 employees to ensure their workers are vaccinated or tested on a weekly basis. And this is where things get a little dicey.

Biden’s plan to force private businesses to meddle in the private healthcare choices of their employees is based on an obscure and seldom-used rule that has been blocked in court more than half the time.

The new White House mandate will be implemented through an emergency temporary standard (or ETS) issued by the U.S. Department of Labor’s Occupational Safety and Health Administration (OSHA), which regulates workplaces.

OSHA’s mission is to “assure safe and healthy working conditions for working men and women by setting and enforcing standards and by providing training, outreach, education and assistance.” It’s not yet clear when these changes will go into effect, but they are expected in the next few weeks.

OSHA has the authority to implement an emergency temporary standard when workers are exposed to a “grave danger” and the standard is needed to protect them. This allows the agency to cut short the usual process for developing a standard, which takes seven years on average.

While the mandate for federal employees and contractors may be more difficult to fight, the ETS seems like an easy target for those who choose to take OSHA to court. And there are already plenty of leaders willing to do just that.

Over 20 Governors have promised to take legal action or other measures to combat the new mandate. Biden lashed out at them in no uncertain terms, saying:

If those governors won’t help us beat the pandemic, I will use my power as president to get them out of the way.”

This should terrify citizens of any political affiliation, as Biden’s comments mark a stark opposition to state sovereignty.

Fortunately, the obscure OSHA allowance has little precedent and a history of failing in court.

Opponents could argue a grave danger, which is not defined in the law, doesn’t exist on a national level as the current spike in COVID-19 cases has been regional.

Before the pandemic, OSHA issued only nine emergency temporary standards – and the last one was in 1983. Courts blocked or stayed four of them and partially vacated another, according to a report by the Congressional Research Service.

OSHA’s mandate could also be vulnerable to legal challenges because months have passed since vaccines became widely available, and it may be difficult for the agency to explain why there is a grave danger now but there was not one earlier this year, said James Sullivan of law firm Cozen O’Connor, who represents employers.

Courts also could find that the mandate’s 100-employee threshold is arbitrary, providing grounds to invalidate the rule, according to Sullivan.

OSHA implemented an ETS in June to address COVID-19 for healthcare settings, inviting comments on whether the ETS should become a final rule. The American Hospital Association urged withdrawing the standard, arguing that COVID-19 was not a grave danger at the job site since studies showed such infections were more likely to occur in the community.

Under the new rule, OSHA can fine businesses $14,000 per violation, which could add up to a staggering amount of money for employers who contest the mandate.

Sullivan believes that Biden knows the OSHA rule is likely to be overturned, but hopes that any defeat in court comes after many employers begin to comply with the rule and millions of people are forced to be vaccinated.

This is one of the most direct attacks on civil liberty in a generation. After 2 years of conditioning, citizens and business owners are trained to follow any arbitrary rule or order passed down by the tyrannical elite.

This mandate will fail. But employees will likely be stuck in seemingly impossible situations as the legal battle runs its course. It is imperative that we not comply. As employees or business owners, we MUST stand our ground.

That may mean getting fired for refusing to accept a dangerous, ineffective, and experimental drug. If your employer is willing to fire you, LET THEM. When the smoke clears, there will no doubt be thousands of lawsuits for wrongful termination, and we’ll be on the winning side.

NOTHING is worth sacrificing your health or freedom. It’s time to back up our words with actions.

←
Previous
TRUE CONSPIRACY: More than 96% of Lancet “scientists” who denied covid lab origin theory have direct ties to Wuhan
→
Next
Idaho doctor reports “20 times increase” in cancer among those “vaccinated” for covid