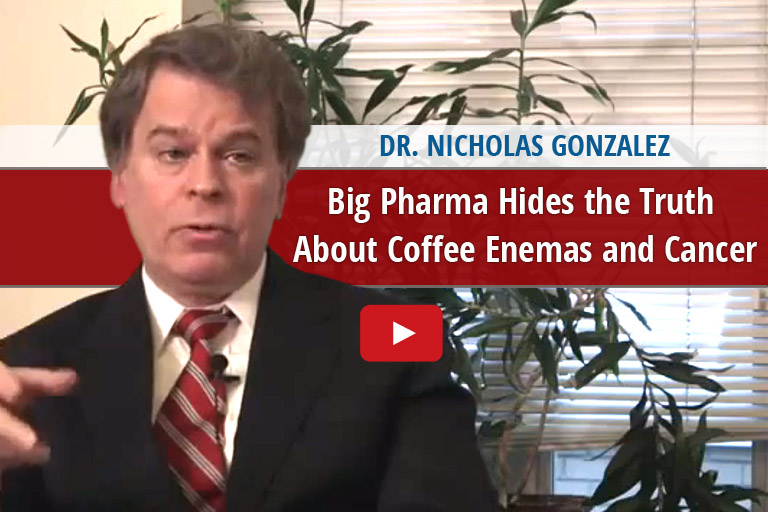 
Dr. Nicholas Gonzalez: So, to answer your original question, the three components: individualized diet, individualized supplements, large doses of pancreatic enzymes. The third component is detoxification, which is often the component of the therapy that elicits the most grins and mockery from conventional doctors. But it’s really very simple. When [Dr. William Donald] Kelley was treating himself he was taking the pancreatic enzymes and tumors were breaking down and that’s when he got really sick; almost life threateningly sick.

First, they thought the enzymes weren’t working anymore but then he realized “the tumors are shrinking. I’m getting sick.” And then he realized “I’m reacting to the tumor waste.” And indeed conventional oncologists know today in 2014 that nothing is more toxic to the human than dead cancer. In fact, chemotherapy, though it doesn’t work for most cancers, does work for some like Hodgkin’s and certain leukemias. And in a Hodgkin’s patient, if you break a tumor down too fast with chemo you’ll kill the patient from the dead tumor. And they call it tumor lysis syndrome. It’s recognized in the textbooks, all my textbooks, conventional textbooks, talk about it.

Well, Kelley recognized that back in 1963 when he was trying to get over his own cancer. And he started going into the literature as he always did. He was a great scholar. He would go into the literature trying to find some technique that would help his liver and kidney work better. The liver and the kidney are the body’s main detoxification organs. That’s for environmental chemicals, our own metabolic waste, the dead cancer process – neutralize and prepare for excretion.

And he opens up the Merck manual and lo and behold, there are coffee enemas. You know, the interesting thing or the sad thing is, the ironic thing, Kelley was brutalized in the media for his use of coffee enemas and we get attacked about it today too. But they come right out of the conventional medical literature. He didn’t learn about it from alien space beings, you know, injected into his brain through some mystic psychic experience. He didn’t learn about them through some alternative throw away journals or something else. He learned about them from the conventional medical textbooks. The Merck manual is a compendium of conventional therapies. And they were in the Merck manual. Coffee enemas were in the Merck manual right up until the 1970s.

And when I was doing my investigation of Kelley, the trained investigative reporter that I was, I called up the editor of the Merck manual then and had a talk with him. And he said the only reason they were taken out is we get kind of folksy and we had all this high tech stuff to use. And he had files on coffee enemas, which he sent me. And dozens of studies from the 20s and the 1930s and 40s at major institutions where they’re using coffee enemas for a variety of things — arthritis, mental illness.

I have a study from The New England Journal of Medicine, the preeminent medical journal in the US. 1932, from Harvard Medical School, a group of research psychiatrists successfully treated what we today call bipolar illness, in those days they called it manic-depressive, with enemas. And their hypothesis was that there were toxins from the intestinal track that were polluting the mind and that’s what was causing the mental illness. And they put these people on enemas and colonics and they got well and they got them off medication and out of the hospital. It was in the New England Journal. I have a copy, 1932.

I have a study from Uruguay; just because its Uruguay doesn’t mean they weren’t serious scientists. And people downplay it if it’s not from Boston. It was a good study. Patients with septic shock. In those days septic shock occurs because gram negative bacteria produce a polysaccharide – kind of a carbohydrate that’s toxic to the human and people die from that. The death rate today is still in the range of 40 to 50 percent with septic shock. In those days, it was like 90 percent. Well, these people in Uruguay at an intensive care, what we would call an intensive care unit today, had learned about coffee enemas from the conventional medical world, started treating their patients with coffee enemas and had great success. We published it in a peer review journal. We have a translation that was originally published in Spanish. Almost like 90 percent reversal with septic shock. That should have changed the way hospitals treat septic shock all over the world. It was ignored because it was folksy. It wasn’t high tech, even then in 1941-42.

So we have dozens of articles. Kelley collected them, dozens of articles from the mainstream, peer reviewed medical literature, and discussing the use of enemas, coffee enemas, other types of colonics, and the successful treatment of all kinds of illnesses. So he incorporated them into his practice and it helped and he added other things like liver flushes and colon cleanses and juice fasts and skin brushing which is an all naturopathic technique to get the lymphatics to work better, kidney flushes, all kinds of techniques that we still use today.