Facebook is once again taking aggressive steps to prohibit free speech on its platform. They claim that their goal is to “protect” users from hate speech and dangerous misinformation, and political ads meant to mislead voters. But the result has been a lopsided attack on conservatives, supporters of natural and alternative medicine, and those who dare to question the safety of vaccines.

Last summer, Facebook CEO Mark Zuckerberg defended the First Amendment rights of users. He specifically stated that users should not be censored, even if they are wrong. He went so far as to defend users who deny the holocaust.

He said Holocaust deniers were “deeply offensive”, but

“I don’t believe that our platform should take that down because I think there are things that different people get wrong. I don’t think that they’re intentionally getting it wrong … It’s hard to impugn intent and to understand the intent. I just think, as abhorrent as some of those examples are, I think the reality is also that I get things wrong when I speak publicly.”

But that sentiment has changed drastically.

What started as a campaign to reduce content that promotes self-harm and violence has become a PC campaign to eradicate any thoughts that don’t line up with Silicon Valley ideals and Big Pharma propaganda. In the past year we’ve seen public figures like Alex Jones and Milo Yiannopoulos banned from Facebook for discussing “conspiracies” which millions of Americans also question.

Instagram, which is owned by Facebook, recently banned influencers from promoting guns, tobacco, or vape products on the platform. Influencers on Instagram routinely promote products that they don’t use and don’t understand. Fyre Festival, promoted by the likes of Kendall Jenner, Bella Hadid, and Hailey Baldwin, is one of the greatest scams in recent memory. Tickets cost up to $100,000 a person and promised a glamorous festival experience.

Instead, they arrived to find a muddy island littered with waterlogged mattresses and a severe shortage of functional plumbing. The gourmet meals turned out to be a slice of cheese on bread, and many festival goers became stranded on the island for days. Instagram did nothing about the influencers who made this disaster possible, but they are now coming down heavily on anyone who promotes firearms or tobacco products.

Just last week, Facebook announced that it would ban “misinformation” regarding the 2020 census, although it’s unclear exactly what that might entail. Suffice to say that anyone voicing concern about the census or how it might be used could find themselves blacklisted.

Meanwhile, those who stand for freedom, support natural health, and oppose major industries are disappearing. No matter how credible your information, even mentioning phrases like “Big Pharma” or “Big Agra” can result in a digital assassination online.

Write something they don’t agree with and you get this flag on your post: 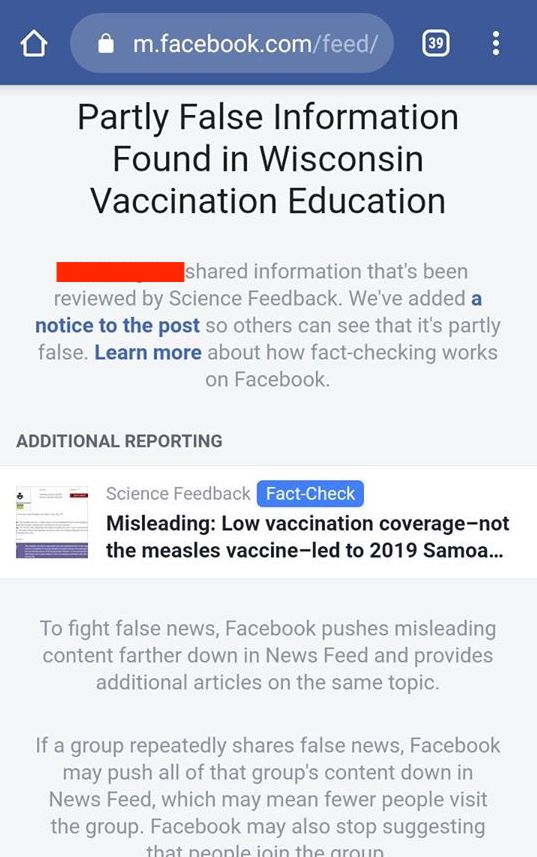 Every day, Google handles about 1 billion questions about health. Yet many of the leaders in the natural health world are slowly disappearing from search results and social media. Sayer Ji of GreenMedInfo, Erin Elizabeth of HealthNutNews, and Dr. Mercola of Mercola.com have all seen their organic results plummet. And they aren’t alone. TTAC has been pushed further and further down in the results, making it increasingly difficult to find live-saving information.

We’re slowly seeing free speech disappear from the internet. Posts are being hidden or blocked. Political figures and health freedom advocates are being banned from social platforms. And soon, even average users who share “controversial” content may be banned.

In an interview with Politico, Vera Eidelman of the American Civil Liberties Union said:

Every time Facebook makes the choice to remove content, a single company is exercising an unchecked power to silence individuals and remove them from what has become an indispensable platform for the speech of billions.”

We’ve already seen our vaccine safety content vanish from social media. We’ve been banned from Pinterest, and it’s nearly impossible to find our content on Facebook. Over a million people follow The Truth About Cancer Facebook page, and yet very few of them can see our posts without updating their settings.

Despite extensive research from thousands of peer-reviewed studies, Mark Zuckerberg and the tech elite think that we’re dangerous. What’s more likely is that they’re protecting profits. The pharmaceutical industry plays a major financial role in the tech world, and any information questioning the latest drugs could hurt their bottom line.

At TTAC, we’ll continue to fight for freedom. We’ll continue to bring you the truth, no matter the cost. And we will not be bullied into submission by the tech industry. They can downgrade our search rankings, block our posts, and delete our accounts, but they will never be able to take away our freedom of speech.

To make sure you don’t miss a thing, please <<sign up for our email list>>. We’ll be able to send you all of the latest information directly, without the interference of Big Tech. And please forward this article and share with everyone you know.

Our lives are precious, and we all deserve to have the information we need to make the best decisions for ourselves and our families. Don’t let Facebook tell you how to live your life.