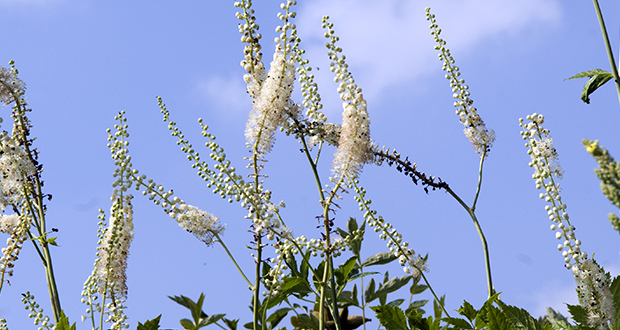 What is black cohosh?

Grown in the eastern United States and Canada, black cohosh is a perennial plant with white and feathery flowers belonging to the buttercup family and grows up to 8 feet tall. The roots of this tall woodland plant are popular as a natural herbal remedy.

Several centuries ago, Native Americans used the roots of black cohosh to relieve several female maladies such as menstrual cramps, menopausal symptoms, mood swings, irritability, sleep disturbances, hot flashes, sore throat, cough, arthritis, muscle pain and indigestion. In this regard, the black cohosh plant is regarded as the “woman’s remedy.” Even today, black cohosh is called upon to treat these conditions. The juice of this plant is extracted for making insect repellent and treating snake bites.

As it’s being widely used as a woman’s remedy, researchers are having a look on what black cohosh could do for treating cancer, especially as a possible cure for breast cancer.

Based on a systematic review, researchers studied the safety and efficacy of the black cohosh plant among breast cancer patients. The review consisted of 5 clinical and 21 preclinical studies. Generally, the research was determining the effectivity of black cohosh in the associated hot flashes of menopausal women with breast cancer. 1 Hot flashes are the most common symptoms of menopause. They are defined as sudden feelings of warmth which you can feel over your face, neck and chest.

But until more studies are done about the role of black cohosh against breast cancer, breast cancer patients should not use black cohosh as one of their alternative cancer treatments without consulting their health care provider first.

Other uses of black cohosh

While studies about the relationship of black cohosh and cancer are being conducted, you can also effectively use it among the following conditions:

Minimizes pain in headache and migraine. The black cohosh plant consists of a mild sedative activity. Drinking a black cohosh tea or its capsule form can help you relieve of your headache
and migraine which may be caused by stress, anxiety and depression.

Relieves menstrual cramps. A menstrual cramp is usually experienced by women during their monthly period. It is a pain caused by the contraction and inflammation of the uterine wall. Black
cohosh is known for its anti-spasmodic property and anti-inflammatory property. Drinking a warm black cohosh tea may help you relieve of your severe contractions and spasms during your
monthly period. To have a better effect, drink the tea once a day before the onset of your monthly period.

Treats respiratory tract infections. Aside from having an anti-inflammatory property, this amazing herb can also serve as a decongestant and astringent. It also consists of anti-viral and anti-bacterial properties which make it an effective treatment against respiratory tract infections, including colds, flu, nasal congestion, asthma and bronchitis. Just drink a warm cup of black cohosh tea two times a day.

How to take black cohosh

Black cohosh is not currently recommended for children since there are no known reports on the use of black cohosh among pediatrics. As for the adults, the recommended dose ranges from 40 to 80 mg per day.

If you prefer drinking its tea form, make the tea by incorporating 20 grams of black cohosh dried root in 34 ounces of water. Boil the mixture and let it simmer for about 20 to 30 minutes. Strain it
and you may drink a cup of black cohosh tea two to three times daily. However, the tea form may not be as effective as taking black cohosh extracts.