You are here: Home / Featured Articles / The Anti-Inflammatory and Healing Power of Boswellia Serrata 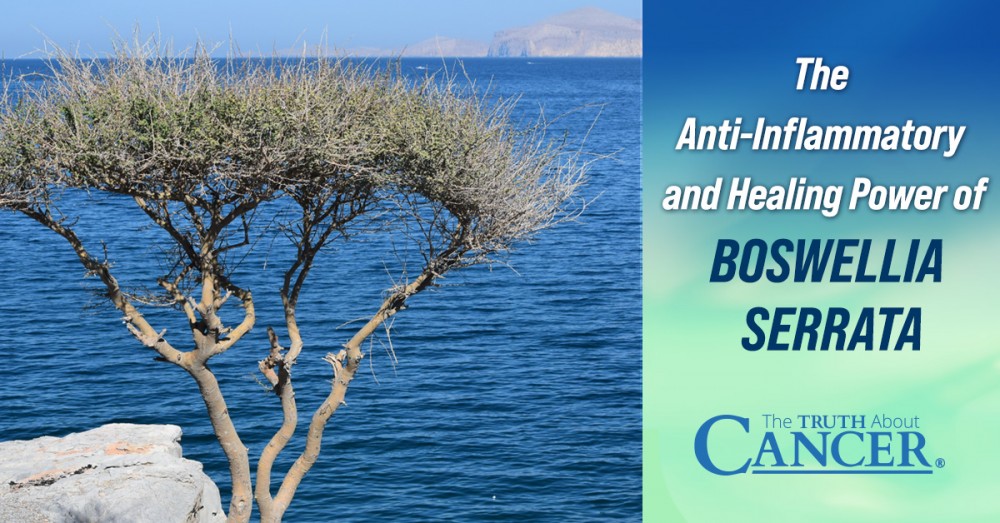 Dotting the parched hills of Southeast India and large swaths of arid land spanning the distance from Northern Africa to the Middle East, a branching tree with a powerful reputation stands proudly tall as one of world’s most healing shrubs.

This cultural and religious treasure of a plant has terpene-rich sap and oils which have been used as a multifaceted healing elixir for many centuries. The Boswellia sacra tree is a uniquely ragged and almost oversized-Bonsai-looking tree from which these precious substances are extracted is known scientifically as Boswellia serrata, and the medicine itself is more commonly known as frankincense.

You might recognize this latter name from various Biblical texts that regard it as a paragon of sacred significance. More precious even than gold, frankincense (as you may recall) was one of the gifts fit for a king that the magi brought with them to present to the newborn Christ after traversing the length of Asia to reach Bethlehem.

Frankincense was also considered to be amongst the highest valued currency traded throughout the Middle East. It held value so immense that the high priests of Israel would burn it as a most precious sacrifice to God.

Frankincense isn’t nearly as popular or esteemed today as it was back then, at least not in the West. But it’s definitely still around, and it’s making a major comeback in the natural healing arts. Especially as word gets out about all that Boswellia serrata is capable of treating.

From helping to more quickly heal everyday wounds and prevent infections, to treating and even eradicating cancer (and everything in between). There’s very little that frankincense can’t do, and it’s with great excitement that I offer up a taste of what this ancient sacred medicine has to offer.

How is Frankincense Derived?

If you’ve ever seen raw frankincense, you already know that it looks a lot like crystallized rocks or pieces of popcorn bearing a powdery-yellow or brownish hue. But these small, oddly shaped chunks of mysterious matter are actually the dried oleo gum resin that’s extracted from the Boswellia serrata tree, first by making small incisions into the bark of its trunk. Much like what happens when a maple tree is cut to tap syrup, these incisions allow frankincense to run down as liquid from the tree in order to be captured and dried.

This solid resinous substance is technically only between 30-60 percent actual resin, which in and of itself is replete with monoterpenes, diterpenes, triterpenes, and a host of tetracyclic and pentacyclic triterpenic acids. Terpenes and triterpenic acids are fancy names for the various aromatic organic compounds in a particular substance that give it its characteristic smell and taste, as well as its diverse therapeutic functionality.

The remaining substances in frankincense represent a varying combination of essential oils and polysaccharides, each of which serves its own respective purpose and function in making frankincense what it is medicinally: a powerhouse of anti-inflammatory, anti-aging, antibacterial, antiseptic, decongestant, and anti-cancer goodness… all in one beautiful little kernel.

Frankincense is Prized in Ayurvedic Medicine

In Ayurveda, the traditional Indian system of medicine, frankincense is prized as one of the most valued herbs in existence. The gummy, resinous portion of its derivative has traditionally held a prominent place in the treatment of conditions like diarrhea, parasites, skin and blood diseases, cardiovascular disorders, respiratory infections, hair loss, hemorrhoids, and asthma. Evidence also shows that it’s an effective remedy for arthritis.

In more modern times, frankincense has proven scientifically to fight inflammation, help control blood lipids, prevent coronary plaque, protect the liver, and help relieve pain. It’s also widely regarded amongst those who are familiar with its uses as being a powerful stimulant, both internally and externally. This is why patients who are weak from illness often inhale its essence as an aromatherapeutic.

Studies have shown that the collective of boswellic acids found in frankincense inhibit the synthesis of pro-inflammatory enzymes like 5-lipoxygenase (5-LO) that tighten and constrict the lungs, effectively reducing oxygen intake and triggering the formation of excess mucus, allergies, and inflammation. 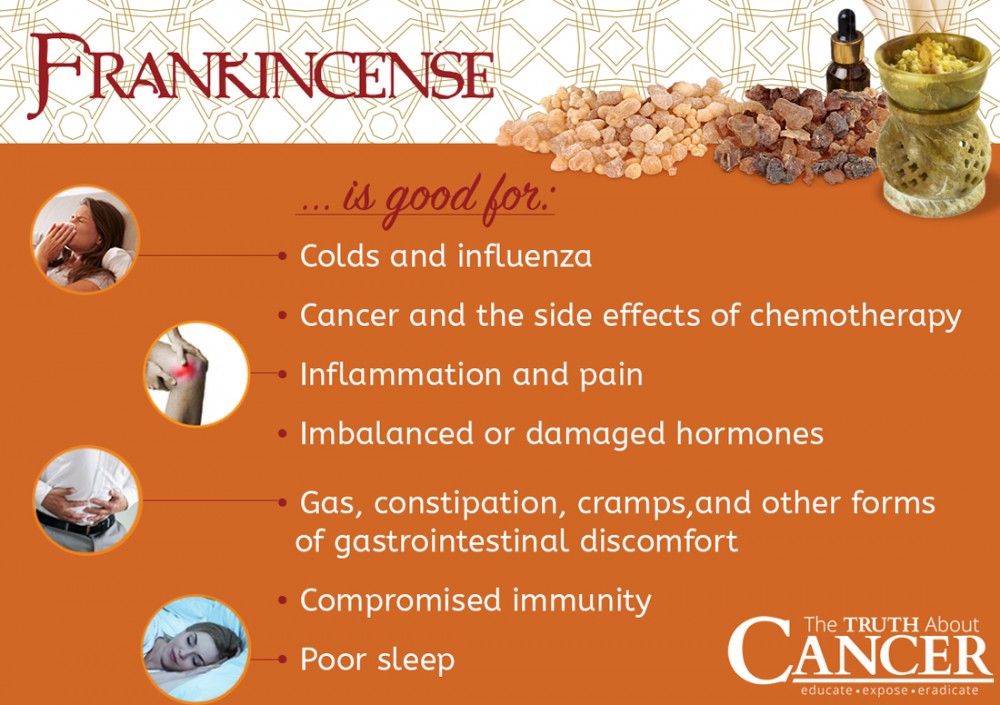 Up until this point, I’ve been interchangeably referring to the resin of the Boswellia Serrata tree as frankincense. But technically when most people use the term frankincense, they’re referring to the oil that’s distilled from this resin. Both substances have their place in medicine, but the essential oil of frankincense seems to be the preferred form of use for frankincense. This is because it’s more concentrated and, if done right, contains the highest levels of healing compounds.

The essential oil of frankincense is often used in aromatherapy to clear out the nasal passages and lungs, as well as to purify or deodorize a space. It can also be taken orally to prevent tooth decay, bad breath, and oral infections. Many people combine frankincense oil with baking soda to create their own homemade toothpaste. Another way to use frankincense oil topically involves applying it directly to the skin to help clear blemishes and scars caused by acne and eczema, as well as to prevent wrinkles and under-eye circles and “bags.”

All the way around, frankincense has a solid track record as an effective treatment for a wide range of health conditions. The scientific literature has conclusively demonstrated efficacy for frankincense as a powerful therapeutic for:

←
Previous
How to Prevent and Heal Ovarian Cancer (+10 Tips!)
→
Next
Is Earth’s Most Important Resource Toxic?