You are here: Home / Cancer Prevention / Is Breast Thermography Better Than a Mammogram? (video)

Video Transcript: Is Breast Thermography Better Than a Mammogram?

Ty Bollinger: So Dr. Bales, one of the things that we’ve learned over the last couple of years with these interviews is that a mammogram is not necessarily the best way to detect breast cancer. There are other ways that are much better, that are superior, and one of them is thermography. You’re going to demonstrate a thermographic machine for us today and talk about that.

Dr. Martin Bales: I will. My father actually invented the first all-digital infrared camera in 1979. But it wasn’t for anything with body or health, it was actually for our defense. It was used in missile detection back in Afghanistan.

Ty Bollinger: So it was looking for heat.

Dr. Martin Bales: It was looking for heat, for missiles. It used to be you had to track the missiles going across the sky manually. Now on our warheads we have that it does it automatically.

In the early 80s a group of doctors approached my father and said, “You know, we’ve heard the body—obviously is circulation—we can diagnose a lot of diseases by seeing where there’s hot spots and where there’s cold.” He said, “Okay, I’ll make a medical version for you.”

Ty Bollinger: Really? That’s fascinating. But the first one was missile detection?

Dr. Martin Bales: First was missile detection. So basically, it can be used in any part of the body. Probably—as most people have heard—the breast thermography is the most popular. And it’s really limited as far as cancer to breast, possibly some skin cancer because it is skin deep. It doesn’t look, like, for liver or other organs. But it’s a great way—it’s completely painless. The ladies like it because it’s no pancake smasher, as they say. There’s no ionizing radiation, so it can be done as little or as often as one wants. It’s just in a cooled room that it’s performed.

Dr. Martin Bales: So here on the screen I’ve pulled up a couple examples. So on the left here we’d see this woman—we would say is very low risk for acquiring breast cancer. Because there is not a lot of etching, you see the red or that around the breast tissue. She does have some red up in these areas. That means she’s alive. That’s her carotid and jugular. So we hope we have a little bit of circulation there. As opposed to this image here on the right where you can see there’s quite a lot of activity. 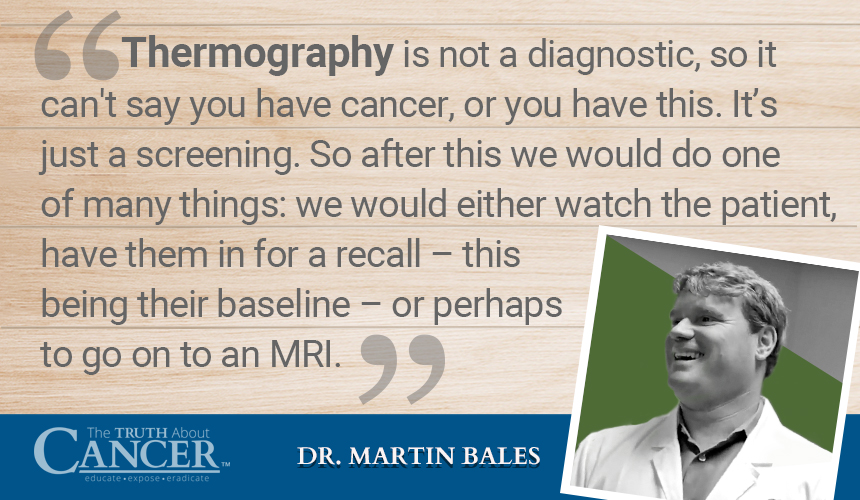 You mentioned some of the limitations. There’s been at least two studies, very large, that have come out, on the limitations on mammography. One of them was a Canadian study, I believe, it was 20 or 25 years that they’ve watched in the past. They found no benefit.

Also The Lancet, which is a large British journal equivalent to our Journal of the American Medical Association, known as JAMA, in that it said there is really no benefit at all to doing and possibly some harm. The harm being it is ionizing radiation, which we know isn’t the best for us. And also, again with the pancake smasher, if you do have a cancer and you smash that wall that the body has put around it, are you spreading the disease that way. I don’t know, but I don’t want to find out.

Martin grew up working with his father, Maurice Bales, at Bales Scientific, Inc., a designer and manufacturer of medical devices. Maurice’s first two machines were infrared cameras — the same model that Martin uses in his practice today. His father’s second invention and popular medical device was the Photonic Stimulator — the machine used for photon therapy.Martin decided he liked working with patients, so he decided to study Traditional Chinese Medicine — acupuncture, Chinese herbology, and other modalities.Over the course of Pacific College’s 4-year master’s program, Martin studied the effects of photon therapy in combination with acupuncture for pain management. He was very impressed with the results and now offers this innovative combination therapy at the Center for New Medicine.Dr. Bales has worked extensively with cancer patients, starting with a 1 year internship on the Oncology floor of Rady Children’s hospital in San Diego. At Center For New Medicine and Cancer Center for Healing, Dr. Bales runs the Photon, Class IV Laser, PEMF, and Acupuncture therapies for Cancer patients. These therapies provide both primary and adjunctive-focused treatments to address increasing bioavailability of Hyperbaric Oxygen and IV therapies and providing non-invasive pain management when needed.