You are here: Home / Nutrition / Food & Drink / Can Water Act Like an Antioxidant in Your Body? (video)

Video Transcript: Can Water Act Like an Antioxidant in Your Body?

Ty Bollinger:  And then you mentioned the fact that water carries out toxins out of our system. So those are two interesting things. Let’s talk about that a little bit. In light of the fact that blood is the life of the body. One of the recurring themes throughout this mini-series that we’re doing, is that doctor after doctor has said toxicity and not removing the toxicity from the body − one of the primary causes of cancer. So let’s talk about the toxicity factor.

Paul Barattiero: Our cells function electrically. Our bodies are electric and we have a lot of electricity and electrons that are flowing in our system. And ultimately, without electrons, cells don’t function properly. The way free radicals harm us is they go and steal electrons from healthy cells.

Ty Bollinger: So the free radical is what? What is missing an electron?

Paul Barattiero: It’s an oxygen. So a free radical is an oxygen missing one of its eight electrons, so it only has seven electrons. 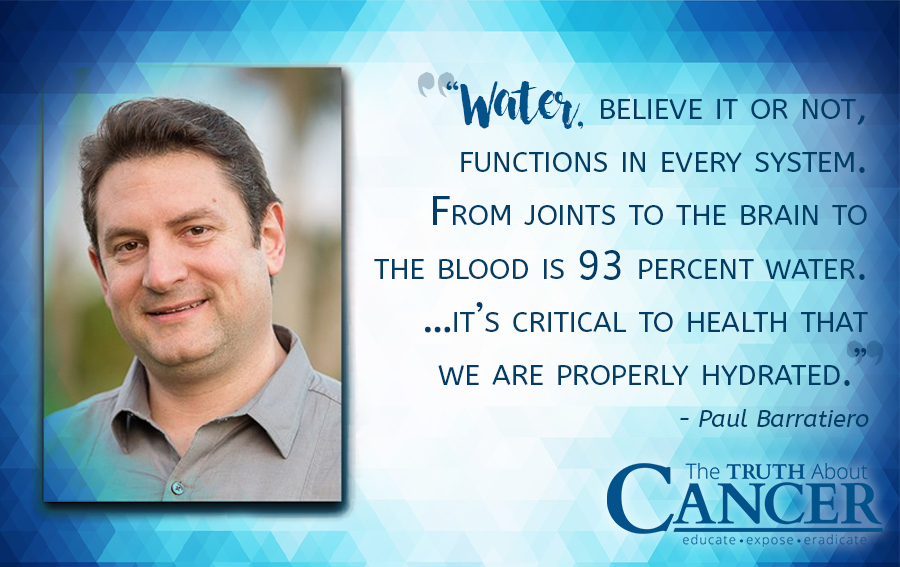 Ty Bollinger: Okay and a free radical is oxygen atom that is missing one of them?

Paul Barattiero: So what it will do is it will go throughout the body and steal electrons from healthy cells that are weaker than the oxygen itself. And take it from it. Well, when it does that, that cell no longer functions appropriately or can’t function at all, depending on what kind of cell it is. So that’s why free radicals harm our system. If we take out a percentage of our cells not functioning, we lesson the entire effectiveness of our system. It’s like taking part of your engine away in the vehicle. It’s not going to go.

Paul Barattiero: So, in our body being taxed and taxed and taxed, not only toxins, but we’re actually oxidizing ourselves, or that’s what free radicals do. They’re stealing electrons and electrons are the fuel. It’s got to function electrically. You’ve got to have those electrons.

When we have water that’s properly structured with a negative electrical charge, for instance, there is a net gain or an increase of one electron that can be donated to complete those free radicals. It’s basically what an antioxidant does. Any antioxidant that people are choosing has an extra electron, and that’s how antioxidants function with the cellular system.

Ty Bollinger: Then they donate that extra electron to the oxygen atom that’s missing the electron.

Ty Bollinger: Okay, so then what I’m hearing you say is that if you have water that’s structured properly it can act the same way as antioxidants, which everybody knows antioxidants are good.

For natural mental clarity, balanced energy, immune defense, and so much more, the simplest solution is also the most effective. Learn more about how molecular hydrogen can give your water the vital boost it needs by clicking here.