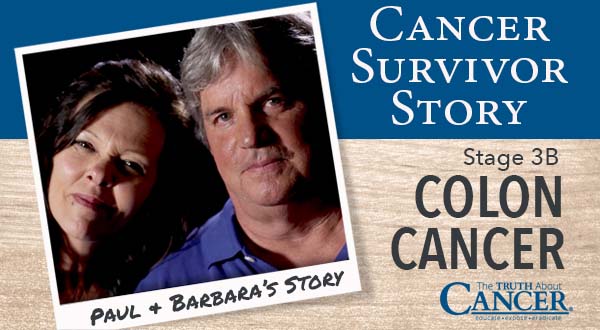 It was an emergency.

When Paul was diagnosed with Stage 3B colon cancer in August 2016, they found a life-threatening blockage in his colon the size of a large grapefruit.

Paul and his wife, Barbara, were told that if they didn’t operate to remove it immediately, he would die in 48 to 72 hours.

Told he had no choice, a team of surgeons went to work on Paul to remove the mass and a third of his colon. Once it was over, Paul was certain everything was resolved.

That’s when they told him that 4 of his 24 lymph nodes were cancerous. The doctor told him he had to do 9 to 12 months of chemotherapy.

Paul rebelled. Many of his family members and friends had chemo. And they died afterward. Paul considered chemo pure poison… and told his doctor, “No.”

Paul and Barbara started researching. Trying to find answers. Then one night at 3 am, her husband suffering and sick, Barbara said a prayer asking for enlightenment. Then typed the words “the truth about cancer” in Google.

There it was. TTAC. The first Google result. And God kept talking to her as she read everything on the site. The two of them watched A Global Quest, and they discovered many of the ways out there to treat and beat cancer.

They created a regimen based on what they learned. Attacked the cancer from every angle.

Find out where Paul now stands in his journey with cancer, and where his commitment to a healthy lifestyle has led him.

Next, listen to Paul and Barbara discuss how they respond to the skeptics who question the benefits of holistic healthcare.

Barbara and Paul share even more on how TTAC impacted their cancer journey… and their tips for staying cancer-free.