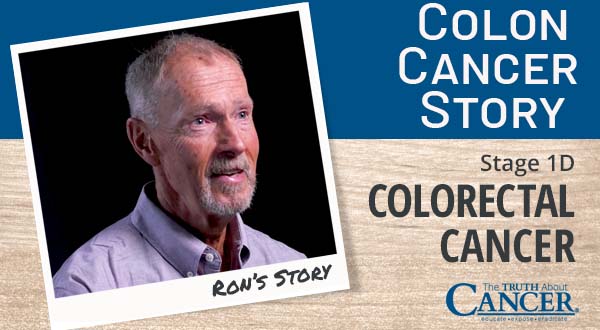 As was his habit, he went in to give blood and found that his iron levels were too low for him to donate. This was highly unusual.
His doctor recommended a colonoscopy – something Ron had never done. That’s when they found it: a 3-inch tumor. He had colon cancer. It was January of 2016.

The doctor told him he’d have to have a huge section of his colon removed. Afterwards he’d need a colostomy bag and he’d have no bladder control. And before they could even schedule his surgery, he’d need two rounds of chemotherapy and one course of radiation in order to get the tumor small enough to operate.

Worse, his hopes for a better second opinion were dashed. They said basically the same thing… then added that if Ron didn’t follow their protocol, he’d be dead in six months.

Ron was shocked and depressed. His wife was devastated. How much longer did she and his kids have with him?

While Ron’s wife wanted him to follow the conventional therapy, Ron wasn’t ready yet. He prayed and saw his pastor. Then the turning point came… at his local gym.

Ron was at the gym when he started talking with one of his closest friends, and told him the whole story. His friend said the words that would change Ron’s life, “Have you heard about The Truth About Cancer?”

After watching TTAC’s A Global Quest, Ron found himself a naturopathic clinic. They put him on a special diet based on Dr. Gerson’s treatments and other proven alternative methods.

He knows he will beat cancer… with God’s guidance and by trusting his body’s ability to heal.

Watch the video above to find out what treatments and alternative methods had a life-changing effect on Ron’s life.

Next, Ron shares even more advice for other cancer patients newly diagnosed with cancer.