Ty Bollinger: Have you heard about Otto Warburg? He’s a scientist who won a Nobel Prize back in the 1920s for his discovery about cancer cells. As it turns out, Warburg made some other important discoveries that have largely been ignored by conventional medicine for the past 100 years.

Charlene Bollinger: Fortunately for us, researcher and author Dr. Thomas Seyfried is making incredible new advancements built on Warburg’s Metabolic Theory that are game changers when it comes to the treatment of cancer. Stay tuned to learn more.

Dr. Thomas Seyfried: Otto Warburg had this discovered a long time ago. He made some very seminal discoveries back in the early part of the 20th century. He said cancer arises from damage to respiration. Enough energy from fermentation, which is an ancient form of energy metabolism, compensates for the insufficient respiration.

Cancer cells continue to ferment lactic, and we know in our own research now, we’re learning that these cancer cells can also ferment amino acids. So, this is a fermentation. Enhanced fermentation is the signature metabolic defect in all cancer cells. Every cancer cell has different kinds of mutations, but they all ferment in one way or the other, and that’s a very important observation.

So, we have to go over a little energy metabolism to see what the actual Warburg metabolic theory actually means. So, this is a diagram of a cell, you can see the mitochondria is here.

About 89-90% of the energy that we get in our bodies comes from respiration. We breathe in air we give off CO2, we produce water. We’re all alive, we’re all breathing unless there’s any zombies out there… I don’t think so. But, we get our energy from respiration. Now we have very small amounts of energy coming from a fermentation pathway, the glycolytic pathway in the cytoplasm, and also a succinyl CoA synthesis step inside the Krebs cycle.

What happens in cancer is there’s a shift. You’re getting less energy from OxPhos, and more energy from these primitives. They make very small amounts of energy in normal cells, but what the cancer cell does—it seems to upregulate energy from these two sources, which are ancient forms of compensatory energy. This is the way most organisms on the planet would get energy before oxygen came into the environment.

So, the question then becomes, in light of that knowledge, how do we get cancer? Where does cancer come from? So, we know, and nobody denies this, carcinogens cause cancer. You were exposed to some chemical carcinogen, “Oh, you got cancer… he was exposed to asbestos” or some other chemical. We know that radiation causes cancer, right? Radiation. People, say “Oh you get cancer from radiation.” Intermittent hypoxia, the stopping of oxygen, can cause cancer. Systemic inflammation can cause cancer. Alright? These are known carcinogens, known processes.

Rare inherited mutations. You can know that BRCA1, you know you hear about these genes. They only cause cancer if they affect the mitochondria, and I’ll present that in just a second. And we know RASON and viruses: Hepatitis C virus, papilloma viruses, HIV viruses, they will all cause cancer in one form or another. 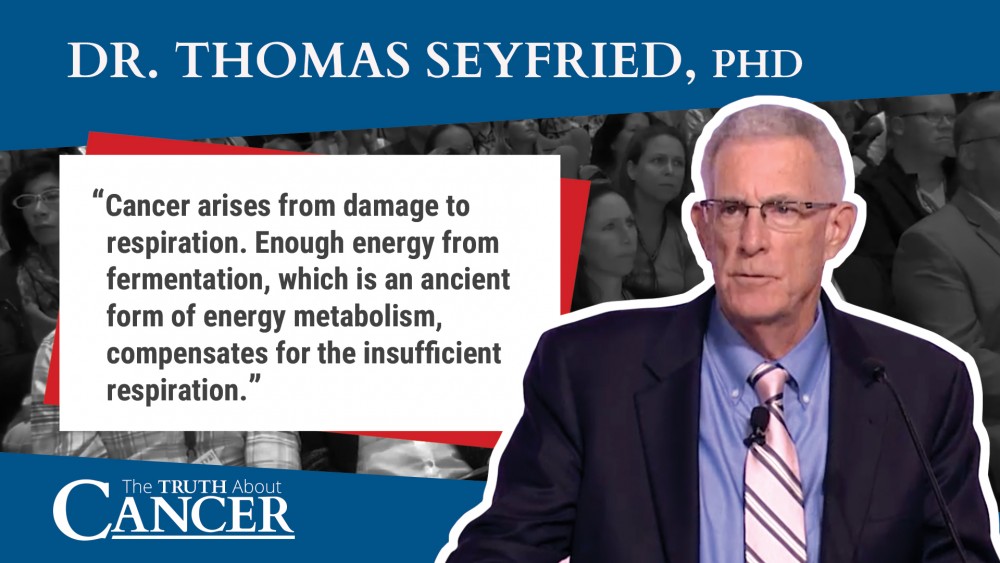 So, what happens is that you have this oncogenic paradox, which means that—which was a mystery for so many years. And even in Sid Mukherjee’s book, Emperor of All Maladies, on page 303, he addresses “How is it possible that all these different cancer causing [influences] can produce the disease through a common pathophysiological mechanism?” That’s the oncogenic paradox which has plagued the field for decades.

So, what happens then, is that when you—any one of these provocative—you can get breast cancer from several of these, you can get an inherited mutation, you get carcinogens, you get X-ray—whatever it is. It damages the respiration. The mitochondria throw out reactive oxygen species. These are radicals. They damage proteins, lipids, and nucleic acids, so the mutations in the nucleus are essentially coming as a downstream epiphenomena of the damage to the respiration. The ROS are carcinogenic and mutagenic, and it’s coming from the damage. And not only that, it further damages respiration.

And on the bottom here you’ll see: We get most of our ATP, it starts to dissipate, it becomes down—and it has to be chronic; it can’t be acute or the cell will die. And then the red line is the compensation from the substrate level phosphorylation, which is a fermentation metabolism.

So, as this tumor progresses, we collect mutations in the nucleus, we start to dissipate our energy from respiration, and we accumulate energy from fermentation, and everything goes to crap. The cells start growing, all these problems happen. The nuclear mutations that the people are studying are irrelevant. We know that because if we take the nucleus and put it in a new cytoplasm with new mitochondria, this stuff goes away.

Now here are the hallmarks of cancer, as Hanahan and Weinberg have pointed out. Hallmarks. Now, once the cell loses its capability of control, it enters the default state. This is the state that the cell had before oxygen came on the planet some 2.5 billion years ago. All the cells were fermenting, they grew with unbridled proliferation, and they stopped growing when they ran out of fermentable fuels; they would die.

Ty Bollinger: Dr. Seyfried is a wealth of knowledge. We’ve heard him talk a lot about cancer not being a genetic disease and here we learn more of the practical applications of what Dr. Otto Warburg learned almost 100 years ago… and actually won a Nobel Prize for. So, thank you again to Thomas Seyfried.

Charlene Bollinger: And thank you for joining us. God Bless!

←
Previous
Function Over Feeling: Why a Scale of 1-10 Is Not Cutting It
→
Next
Cancer Survivor Story: Ron Frye (Colon Cancer) 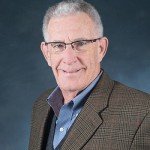 Thomas N. Seyfried’s career in genetics is a driving force, which has given rise to numerous research studies on nutrition. His research continues to help countless people understand the importance of natural living.Seyfried earned his Master’s degree in Genetics from Illinois State University, Urbana, where he received a Ph.D. in Genetics and Biochemistry. He went on to become a Postdoctoral Fellow in the Department of Neurology at the Yale University School of Medicine, where he served as an assistant professor in neurology.Currently, Seyfried assists several editorial boards focusing on nutrition, metabolism, and neurochemical research, and has been working on the Journal of Lipid Research. He is also a senior editor for ASN Neuro and the author of the book “Cancer as a Metabolic Disease: On the Origin, Management, and Prevention of Cancer (Wiley Press).”Specialties: Metabolic Diseases, Natural Treatment, Nutrition, Neurochemical Research, Cancer Prevention, Genetics, and Biochemistry.