You are here: Home / Cancer Treatments / “The Cancer Tutor” Reveals How He Would Treat His Own Pancreatic Cancer 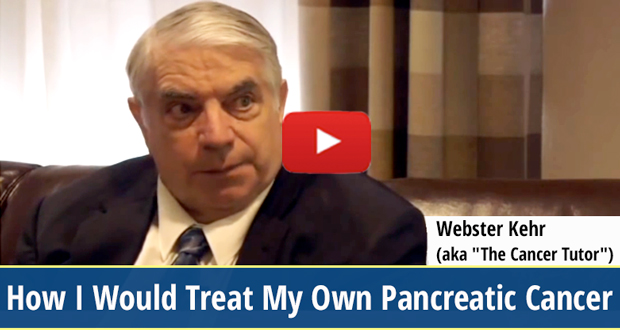 Video Transcript: How I Would Treat My Own Pancreatic Cancer

Ty Bollinger: Webster, let me ask you a question. Let’s say you went to the doctor and he diagnosed you with pancreatic cancer. What would you do personally?

Ty Bollinger: Do you have any treatments that you would currently recommend that you have on your website [cancertutor.com] that might be effective with that type of cancer? Because I know, according to orthodox medicine, pancreatic cancer is a death sentence. They don’t even claim to try to cure pancreatic cancer. If somebody is out there watching today that has pancreatic cancer, what direction would you send them?

Webster Kehr (aka The Cancer Tutor): Let’s go back to our house fire example. The faster a house is burning, the more water you need to pour on. Pancreatic cancer is dangerous because it spreads so fast. So this is a case where you need a lot of fire hoses, to use the symbolism.

It’s true of all advanced cancer patients. Most of the cancer patients I get emails from are very advanced. They’ve already had the chemotherapy, radiation, and surgery. Their body is full of microbes and their immune system is shot, for multiple reasons. Pancreatic cancer, even newly diagnosed, would fit into that category. It’s a very dangerous cancer even when it’s newly diagnosed, because it spreads so fast. 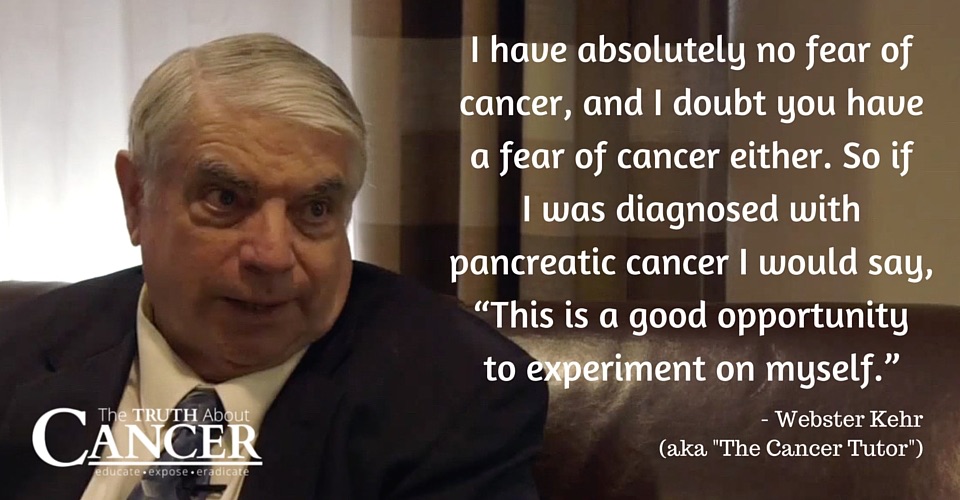 So basically I would use pretty much the same treatment I would use on somebody who’s already been through the chemotherapy, radiation, and surgery. It’s a multi-pronged approach. The Dirt Cheap Protocol has 20 different items on it. I have ways, for example, the Cellect-Budwig Protocol, which we talked about. I literally will say, “Okay. Here’s what you need. You need a combination of the Cellect-Budwig and the Dirt Cheap Protocol. That’s what you need.”

Because they work in completely different ways. We’re not exactly sure how Cellect works because there are ingredients in there that are not mentioned because according to labeling laws they don’t need to be mentioned. So we don’t really know what’s in it. The things that we do know are in it are things that will slow down the spreading of the cancer and some of them will kill microbes inside the cancer cells. But we kind of categorize it as something that kills the cancer cells. Although it may be killing the microbes inside the cancer cells. We’re not exactly sure, because we don’t know the ingredients.

Now when you combine two protocols you can assume that both of these protocols have something in there that’s highly alkaline, because that’s what slows down the spreading of the cancer. So you have to drop one of those. You have to decide which one to drop. In this case you would drop the baking soda and maybe even you would drop the asparagus from the Dirt Cheap Protocol. But you would keep everything in the Cellect-Budwig.

I do that all the time. I recommend that all the time, because of some of the conditions that the patients are in. Maybe they have a really fast spreading cancer. I just kind of lump pancreatic cancer in the same situation as somebody that’s very advanced. It’s deadly.

←
Previous
Can Chiropractic Care Improve Your Body’s Ability to Self Heal?
→
Next
Sun Exposure: Cancer Cause or Part of the Solution?