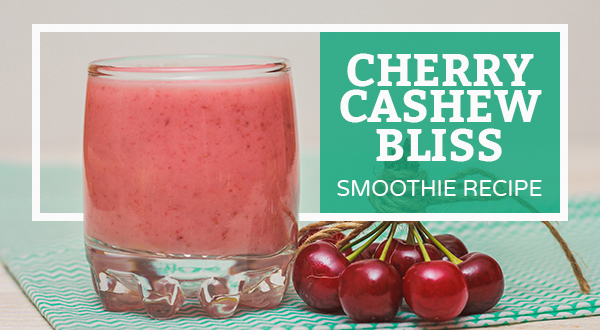 The featured ingredient in this smoothie is the black cherry which is available in the late spring and early summer months. It’s a very special anticancer fruit in that it contains a wide variety of phytonutrients that protect the body from cancer, as well as actively destroying cancer cells that are present in the system.

Black cherries are also anti-inflammatory and help build the immune system which assists the body in fighting disease. The cherries combined with the other superfoods make this smoothie a naturally sweet SUPER cancer-fighter!

Additionally, dark cherries are rich in a unique antioxidant called quercetin! Quercetin has been shown to have a profound effect on reducing oxidative stress and preventing and reversing cancer cell development. As a result of its generous ability to share, quercetin has not only been characterized as an antioxidant, but also has anti-cancer and anti-inflammatory properties.

And, of course, what would a cancer-busting smoothie be without Moringa powder?!

A 2018 study published in Nutrition Journal found that cashews reduce the rick of colorectal cancer among women. They are also packed with protein, digestive enzymes, magnesium, and antioxidants! Goji berries are noted for their lycopene, which has antioxidant properties and anti-inflammatory effects.

Last but not least, and as a rule of thumb, remember that not all cinnamon is created equal. Most of the cinnamon found on grocery store shelves is a cheaper variety known as Cassia cinnamon, or Chinese cinnamon. Cassia cinnamon isn’t as potent or medicinally effective as true cinnamon, which goes by the name of Ceylon cinnamon.

For all recipes, please use fresh, organic, locally-grown ingredients whenever possible, including organic, non-irradiated spices. This will give you the maximum cancer-fighting benefits.

The black pepper enhances the absorption of nutrients significantly but does not interfere with the taste. A dash of high quality salt adds important minerals to the mix and enhances the combined flavors.