Cancer cells look different than normal cells and act differently because of their “pro-survival” mechanisms. Some of these mechanisms have been understood by biologists for decades, while other physiological processes have only recently received greater attention.

Normal cells are designed from their originating stem cell to fulfill a specific purpose in the human body. Although every cell has the same genetic code, cells with different purposes have different genes turned on so that they can perform a unique task in the body. Some cells may differentiate into cardiac muscle cells that make up heart tissue while epithelial cells of the liver line and protect this vital organ.

Cancer cells never differentiate. They continue to divide, cause more damage, and invade new tissue which is a result of other pro-survival properties specialized within cancer cells.

Cancer cells are able to proliferate, building layers on top of each other producing tumors. Healthy cells are programmed to stop proliferating upon reaching contact with a neighboring cell. Key features of cancer cells and their inability to respond to internal and external communication signals include:

Cell proliferation happens in healthy cells when the need arises to replace and maintain a consistent number of cells in tissue and organs. Healthy cells are regulated by the cell cycle by “contact inhibition” which functions to prevent cells from replicating beyond their requirement in the body.

Cancer cells have a loss of contact inhibition. As a result, cancer cells are characterized by uncontrollable growth, the ability to grow on top of other cells in layers resulting in a tumor, and also invade new tissue.

An organized and natural function of normal cells is to recognize signals which induce apoptosis. Apoptosis is referred to as “cellular suicide” because a normal cell has the ability to recognize unrepairable damage and perform a controlled self-destruction for the good of the whole. This feature is turned off in cancer cells allowing their damaged and abnormal features to continue infecting the body.

Researchers in the field of anti-cancer therapy are seeking to understand the various signaling functions involved in this resistance to apoptosis characterized by cancer cells. If apoptotic signaling pathways could be turned on, cancer cells would be able to be eliminated from the human body like damaged non-cancerous cells.

Under a microscope, you can observe the initial differences between cancer cells and normal cells. Their malignancies are first noted by a unique morphological feature. Cancer cells have an asymmetrically-shaped nucleus that is larger than normal, resulting in the reduced presence of cytoplasm within the cell.

Cancer cells’ nuclei have changes in chromatin, abnormalities to structures called mitotic spindle that assist in cell division and contain various genetic abnormalities such as mutations in gene sequencing.

Cancer cells do not require the consumption of oxygen in order to produce energy as do normal cells. Instead, cancer cells rely on glucose (sugar) by about 5 to 10 times more than normal cells for their primary energy-producing pathway. Glucose is converted into lactic acid which is then recycled back into glucose by the liver.

Consequently, an altered metabolic state is characteristic of cancer growth. Researchers often allude to cancer cells as “metabolic parasites” because of their ability to “steal” energy from the host to fuel their own tumor growth. This can result in fatigue and the feeling of drained energy from the individual.

The defective organelle responsible for rewiring metabolism that characterizes cancer cells is the mitochondria. Named after the biochemist that studied the relationship between cancer cells and compromised mitochondrial function, the “Warburg Effect” is what drives a cancer cell’s pro-survival activity. Cancer cells contain mitochondria with mutated DNA and changes to protein structure and enzymes. These changes increase free radical production and disturb normal energy production.

The fifth unique characteristic of cancer cells is their vascularizing properties, or ability to form new blood vessels. Specifically, cancer cells send out chemical signals that promote angiogenesis. New blood vessels provide the blood supply needed for growth by acting as a type of feeding tube for the delivery of oxygen and nutrients to the cancer cell.

Angiogenesis is critical for allowing cancer cells to metastasize or invade neighboring tissue and distant regions of the body.

How Does Cancer Develop?

Epigenetics is expressed by numerous biological and environmental influences that cause changes to gene expression. The greatest known cause of epigenetics is DNA methylation and DNA demethylation. Cancer cells exhibit an increase in epigenetic changes known as DNA hypomethylation.

DNA methylation involves the attachment of a methyl group to DNA. “Hyper” refers to an increase in this occurrence whereas “hypo” is distinguished by a decrease in methylation. These mechanisms are involved in normal cell processes including aging but specific methylation traits are characteristic of cancer cells.

Although DNA methylation is present in normal cells, its presence is less severe than in cancer cells. In cancer cells, DNA hypomethylation often appears as repeated DNA sequences that perform various roles in promoting carcinogenesis. These include “shutting off” genes that suppress tumors or altering a family of genes involved in proper anatomical development. An increase in hypermethylation in cancer is typically coupled with the hypomethylation of DNA sequences.

The percentage of the genome that is affected by DNA hypomethylation is directly associated with the type of cancer cell, its survival abilities, and its degree of malignancy. Different tissues in the body can have differing percentages of genetic sequences resulting from DNA methylation.

For instance, placental DNA and sperm DNA have the least methylated genetic sequences in the human body. The thymus and the brain have the most methylated tissue. This suggests the reason why different cancer cell types promote tumor progression more than others and which cancer cells growth poses a greater threat to health.

With the recent developments in the field of epigenetics, much remains unknown regarding how DNA methylation is affected in cancer cells. However, researchers do recognize that dietary habits can play a critical role in affecting carcinogenic activity by altering DNA methylation.

Cancer stem cells always have the switch for apoptosis turned off. This is one of the most significant factors that directly influences the ability of some cancer cell types, such as colorectal cancer cells, to continue growing and spreading despite cancer treatment drugs.

The best form of cancer prevention is to maintain a healthy immune system. Keep your immune system functioning optimally with the following recommendations: 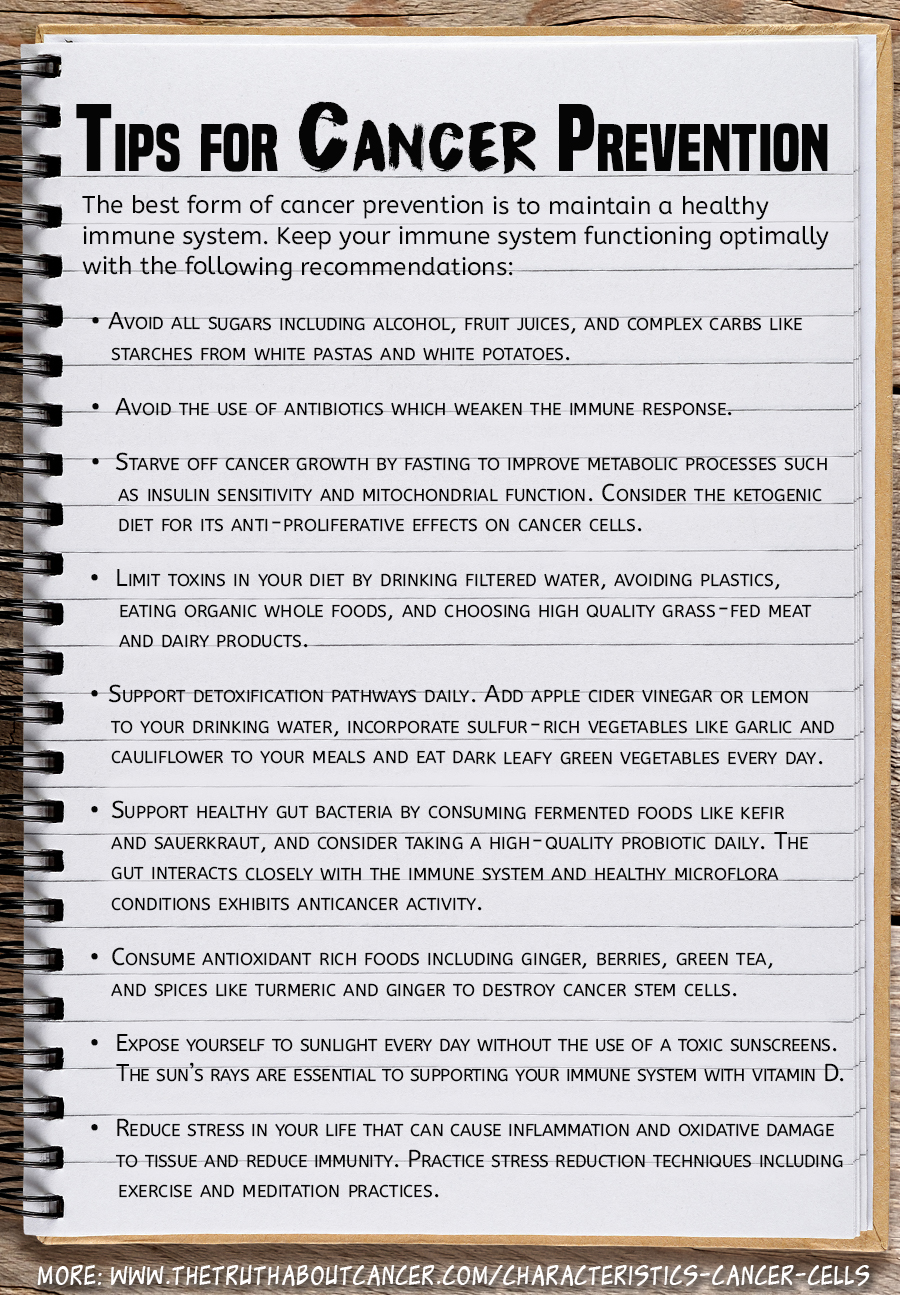 ←
Previous
Is Ingesting Essential Oils Safe? (+ “Healthy 7-Up” Recipe)
→
Next
What Is Low Dose Naltrexone & Can It Help Fight Cancer?