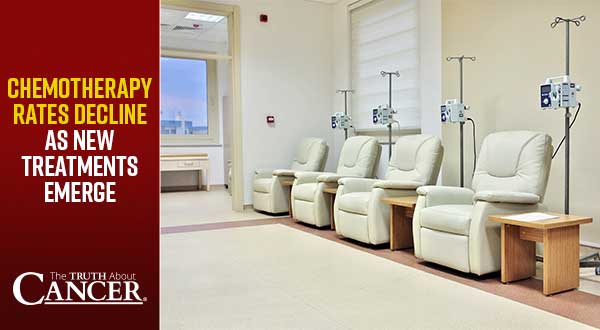 Once considered the “gold standard” of cancer care by modern oncology, chemotherapy treatments have been steadily declining – especially in breast and lung cancer patients. And while the natural therapies are not as well known, due in large part to the Flexner Report of 1910, it’s a GREAT sign that the medical establishment is willing to move away from harsh treatments that offer little benefit to patients.

For decades, chemotherapy was considered “the rule, the dogma,” for treating breast cancer and other cancers, said Dr. Gabriel Hortobagyi, a breast cancer specialist at MD Anderson Cancer Center in Houston. But data from a variety of sources offers some confirmation of what many oncologists say anecdotally — chemotherapy is becoming less common for many cancer patients.

Genetic tests can now reveal whether chemotherapy would be beneficial. For many there are better options with an ever-expanding array of drugs, including estrogen blockers and drugs that destroy cancers by attacking specific proteins on the surface of tumors. And there is a growing willingness among oncologists to scale back unhelpful treatments.

The diminution of chemotherapy treatment is happening for some other cancers, too, including lung cancer, the most common cause of cancer deaths in the United States, killing more than 69,000 Americans each year. Breast cancer is second, killing 43,000.

Still, the opportunity to avoid chemotherapy is not evenly distributed, and is often dependent on where the person is treated and by whom.

But for some patients who are lucky enough to visit certain cancer treatment centers, the course of therapy has changed. Now, even when chemotherapy is indicated, doctors often give fewer drugs for less time.

Dr. Robert Vonderheide, a lung cancer specialist at the University of Pennsylvania, remembers his early days on the job, about 20 years ago.

“Now we are walking in to see even patients with advanced lung cancer and telling them, ‘No chemo,’” Dr. Vonderheide said.

The breast cancer treatment guidelines issued by the National Cancer Institute 30 years ago were harsh: chemotherapy for about 95% of patients with breast cancer.

But 15 years ago,  the creation of a drug called Herceptin changed all that. The drug was designed for patients who have a particular protein on their tumor surface. It was given along with chemotherapy and seemed to reduce the chance of a recurrence by half and the risk of dying from breast cancer by a third, “almost regardless of how much and what type of chemotherapy was used,” Dr. Hortobagyi said.

In a few studies, Herceptin and another targeted drug were even given without chemotherapy, and still provided substantial benefit, he added. That, Dr. Hortobagyi said, “started to break the dogma” that chemotherapy was essential.

At a 2019 conference in Colorado, healthcare leaders from across the globe gathered to discuss the biggest issues facing patients today. With over 175 speakers and panels, there was one clear message that stole the show:

Chemotherapy is toxic, and the immune system is our best bet in the fight against cancer.

Professor of Immunology Daniel Davis delivered a lecture lauding the benefits of the immune system in fighting chronic disease. Unlike chronic inflammation, he explained, acute inflammatory response allows the body to defend against microbial invaders, cancer-causing cells, and environmental toxins, and helps heal injuries and infections. He elaborated:

Our own body’s remedy, the immune system, is far more powerful than any medicine we have devised.”

Author of “The Beautiful Cure”, Professor Davis described how the body’s immune system is the most powerful weapon we have against disease. However, it can be damaged by things like environmental toxins, stress, and poor diet. If we can find ways to harness and support the power of the immune system, he believes it can be far more effective than any medicine.

And professor Davis was not alone.

The following morning featured a panel discussing the role of immunotherapy in cancer treatment. Experts in the fields of cancer and immunology described the harmful effects of chemotherapy and other toxic treatments as “a brutal and all-too-often unsuccessful way to treat cancer.”

Elizabeth Wayne, a professor of biological and chemical engineering at Carnegie Mellon and TED fellow, was a breath of fresh air:

“A lot of our drugs are warfare drugs that we’re just hoping people don’t die from afterward. It’s always fascinating to me that one of the first drugs we went to was mustard gas.”

As an oncologist, I just couldn’t accept chemotherapy toxicity. We have an immune system that’s been shaped for millennia to fight against damage, and I thought that we should be able to use it to fight against cancer cells.”

More recent data, compiled by Dr. Jeanne Mandelblatt, a professor of medicine and oncology at Georgetown, and her colleagues, but not yet published, included 572 women who were 60 or older and enrolled in a federal study at 13 medical centers. Overall, 35% of older women received chemotherapy in 2012. That number fell to 19% by the end of 2019.

The rate of chemotherapy use in these women has been nearly cut in HALF.

Chemotherapy is a “scorched earth” approach to defeating cancer; doctors are simply gambling that your body can survive longer than the cancer. Sadly, this is often not the case. Many cancer patients die as a result of the treatments, rather than the disease itself. This is what happened to dad, Graham Bollinger, and other family members.


But as attitudes shift and new protocols emerge, we can be happy that patients are being given more options for how to heal from cancer. That is our MISSION!


If Cancer Scares You, Do Not Miss This...