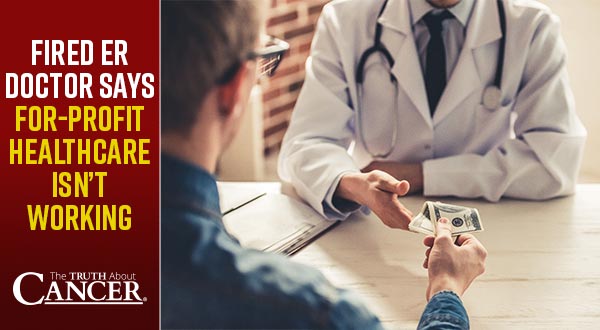 In March of 2020, after speaking out about his hospital’s safety practices, ER doctor Ming Lin was fired from his job at PeaceHealth St. Joseph Medical Center in Bellingham, Washington. A spokeswoman for St. Joseph said that Lin did not work for the hospital and referred questions about his dismissal to TeamHealth, the medical staffing firm that employed him.

TeamHealth said in a statement that it would work with Lin to find the “right location” for him.

Apparently, this kind of vindictive censorship by healthcare companies is not uncommon. “It’s about health care workers. We are repressed. We’re not given opportunities to speak out,” said Lin. “Many of us have to speak out anonymously because we are afraid.“

Two months after his firing, Dr. Lin filed a lawsuit to get his job back. The American Civil Liberties Union of Washington is representing Lin in his lawsuit against both PeaceHealth and the physician staffing firm TeamHealth.

“Rather than stifling speech and removing individuals that point out deficiencies in their practices, [hospitals] instead should listen, eliminate the problems that threaten people’s health, and encourage the experts on their staff to come forward with solutions,” Antoinette Davis, a senior staff attorney for ACLU-WA, said in a statement.

The lawsuit claims wrongful termination in violation of public policy, breach of contract and defamation, among other things.

“There are no questions at all about his competency as an emergency room physician,” says Jamal Whitehead, an attorney who is helping the ACLU with Lin’s case. “It was only when he reported concerns about the hospital’s COVID-19 readiness that he was removed.”

And his patients agree.

“Are they insane?” one man asked. “At the beginning of an international crisis, this is the time?”

“He was our ER doc when Sam had spinal meningitis,” a woman wrote. “It was clear how seriously he took infectious disease. I’ve lost respect for PeaceHealth, treating a great asset to our community with petty retribution.”

“No one should be punished for speaking the truth. Reinstate Dr. Lin,” another wrote.

At the heart of this lawsuit is the issue of healthcare workers being free to speak out about safety concerns, said Dr. Lin. “For frontline workers to be threatened or silenced, it’s just wrong,” he said. “We put our life out there and we should have a right to speak out if we see something that’s unsafe.”

Dr Lin said since posting about his experience he has heard from hundreds of healthcare workers who have gone through a similar situation at other hospitals.

The safety of healthcare workers has been a longstanding issue within the medical community… an issue that was quickly brought to light in the wake of the pandemic. In early 2020, when doctors and patients had very little information about this new virus, staff at many hospitals were forced to reuse disposable protective gear like gloves and masks – or even go without protection entirely.

Frontline workers were unnecessarily exposed to the disease thanks to institutional failure by hospitals and their partners. This failure is a direct result of a corporate attitude that puts profits over patients. After Lin voiced his concerns on social media, more hospital employees have begun speaking up, but few have gone public for fear of losing their jobs.

Dr. Ryan Stanton, a board member of the American College of Emergency Physicians, which represents ER doctors, said some doctors and nurses had been fired or threatened for voicing criticism.

“Punishing them for having a conscience is really unfortunate during this time,” said Stanton, who works in an emergency room in Lexington, Ky.

Last week, Dr. Lin spoke during a session of the TakeEMBack virtual summit, a 2-day meeting aimed at calling attention to the increasing influence of large corporations in the practice of medicine and the detrimental effects on physicians and healthcare workers.

“The atmosphere we work in is becoming increasingly corporate,” Lin said during his presentation.

Are the companies we work for any different from Amazon or Microsoft, whose primary objective is profit?”

He said during the summit that corporate influence in medicine has increasingly reared its head in many ways and that hospitals have set their sights on controlling the medical staff tasked with approving physician privileges for each hospital.

“If you want to keep working and pay off your half-a-million-dollars worth of student loans or your mortgage — or your yacht, if you’re an orthopedic surgeon — you better listen to the medical staff,” Lin said.

When it comes to social media, he noted there’s no U.S. law prohibiting corporations from monitoring employees’ posts — even if they’re done “from your own home, on your own personal device, and on your own free time.“

“Healthcare whistleblowers in this country have been approached by their supervisors in less than 48 hours” of posting, he said.

Lin also said he no longer sees hospitals’ human resources (HR) departments as advocates for staffers. He cited polls showing that employees believe HR is a resource for the employer, not the employee, and that workers wouldn’t report discrimination to HR over concerns about retaliation.

“Corporations are meant to generate maximum profit,” he said. “It’s their nature to do so. Unfortunately, there are consequences. It’s a bit like throwing a raccoon in a henhouse. If we silence healthcare workers, the outcome would be even more disastrous.”

Robert McNamara, MD, chair of emergency medicine at Temple University and a co-founder of TakeEMBack, said during a press briefing that Lin’s story shines a light on the problems with the lack of due process written into corporate employment contracts.

“Physicians risk their livelihood to speak up on quality-of-care issues,” McNamara said. “The denial of due process enables it. Emergency physicians can be fired on short notice without a chance to contest the claims,” because staffing firms risk losing their contracts if they upset the hospital’s administration.

“We need the right to be told why we’ve been fired. We need to face our accuser in that corporation, and we need a jury of our peers, other doctors… to hear us defend ourselves,” said Lisa Moreno, MD, president of the American Academy of Emergency Medicine (AAEM).

“Corporations don’t want to spend money on this,” she continued. “They routinely say to doctors, ‘If you want to work for us, you must waive your due process rights.‘“

She added that AAEM “has a long list going back decades of physicians who were fired solely because they spoke up on behalf of the safety of patients, or admitted too many homeless people, or discharged too many people with good insurance that the hospital wanted to keep.

This is not the way medicine should be practiced.”