You are here: Home / Cancer Causes / Heartburn Medicines Cause Cancer… FDA Does Nothing 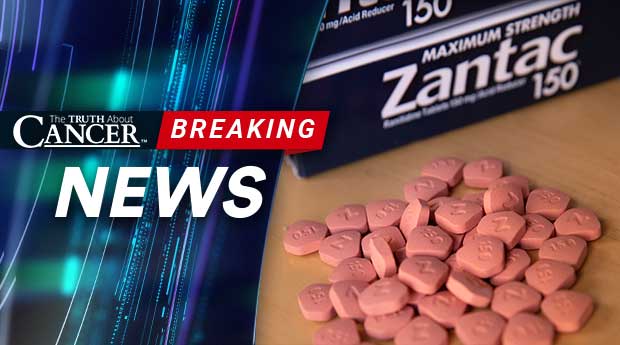 People who take Zantac or similar drugs to combat heartburn may be unknowingly giving themselves cancer. Last week, the FDA announced that it had detected a cancer-causing contaminant called N-nitrosodimethylamine, or NDMA, in ranitidine heartburn medications.

But the FDA fell short of ordering a recall, and it wasn’t until a week later that distributors began to pull the drugs off the shelves. In response to the discovery, Sanofi spokeswoman Ashleigh Koss said,

Sanofi takes patient safety seriously, and we are committed to working with the F.D.A.”

She went on to say that Zantac “has been around for over a decade and meets all the specified safety requirements for use in the O.T.C. market.” –

At the time, Koss stated that Sanofi had no plans to recall the drug. But as evidence and consumer outrage grew over the following week, pharmaceutical company Novartis decided to stop the distribution of its generic Zantac drugs in all markets. At the time of publishing, Sanofi and the FDA had still failed to issue a recall.

This is not the first time that NDMA has been found in popular drugs. Last year, blood pressure medication valsartan, sold under the brand name Diovan, was also found to be contaminated. In that case, the FDA issued a voluntary recall of the drug, citing the risk of developing cancer.

Millions of people take ranitidine to relieve symptoms of heartburn and other gastrointestinal issues. But the potentially life-threatening drugs can still be found in pharmacies across the United States. In Canada, health officials have requested a stop to all distribution of the drug, making the only country in which Sanofi has ceased distribution.

NDMA is an industrial byproduct that can often be found in cured meats like bacon. The FDA says that it is “reasonably safe” to ingest up to one microgram a day. But safety testing has found levels significantly higher. In last year’s valsartan recall, the FDA found up to 17 micrograms of NDMA per dose. Valisure, a pharmacy that tests all drugs it distributes, found that Zantac had NDMA levels reaching 3,000 micrograms.

Valisure petitioned the FDA to recall all forms of ranitidine, though the agency has yet to take any such measures. They claim that NDMA may be “inherent” in the ranitidine molecule and have urged regulators to recall the drug until its safety can be guaranteed. But the FDA, as usual, seems apathetic about consumer safety.

The FDA will take appropriate measures based on the results of the ongoing investigation.”

But they failed to recommend that people using the drug stop taking it. Instead, they simply suggested that alternative medicines are available.

This is the same “profits over patients” approach that we’ve seen repeatedly with our regulatory bodies. Safety testing – especially for generic drugs – is significantly lacking. Dinesh Thakur is a drug-safety advocate and whistleblower who exposed corruption and faulty quality control as an executive at Ranbaxy Laboratories. He says the FDA is not doing enough to protect consumers.

I think this is another good example of how our regulations need to change. Things like this will never get caught, unless somebody is actually actively looking for stuff.”

Meanwhile, a lack of oversight and testing standards has resulted in pharmacy shelves filled with drugs that can literally kill you. The FDA knows that Zantac has been contaminated with a carcinogen. Sanofi knows that something has gone terribly wrong with one of their flagship drugs. But the money is too good to recall them now.

Zantac was the first drug to total $1 billion in sales. In 2018, the drug generated nearly $130 million dollars for Sanofi. But a new class-action lawsuit filed earlier this week claims that the French drug makers have known the risks all along, hiding them from regulators and consumers in order to maintain profits.

The suit claims that each 150mg tablet of Zantac contains 26,000 times the FDA-approved daily limit of NDMA. Steve Berman, the lead attorney for the case, believes that consumers have been intentionally put in harm’s way.

Millions of people in the U.S. suffer from heartburn, and for years, Zantac has been sold to the masses as a safe and easy-to-find remedy for that common ailment. We’re certain that if those millions of consumers knew that the Zantac they take contains known carcinogens, they would be rightfully outraged.”

“Sanofi knew that Zantac contains a carcinogen, yet it chose to conceal these risks to the public to line its own pockets,” the suit claims.

Had defendants disclosed that Zantac results in unsafe levels of NDMA in the human body, no person, let alone a reasonable person, would have purchased and consumed Zantac.”

But all statements from the FDA and Sanofi say basically the same thing:

“We care about consumer safety. We’re looking into it.”

This isn’t the first time that drug manufacturers have hidden risks and lied to the public in order to line their own pockets.
Johnson & Johnson knew that there was asbestos in their talcum powder but did nothing. Juul Labs marketed their e-cigarettes to children, only to destroy the evidence when confronted. Opioid manufacturers bribed doctors and lied about safety, causing an epidemic that has claimed tens of thousands of American lives each year.

We could call the FDA lapdogs for Big Pharma. We could say that the whole system is corrupt, with patents, approvals, and leadership bought and paid for with blood money from the industry. But we don’t need to. All we have to do is show you the numbers.

Doctors are literally incentivized to prescribe chemotherapy drugs to cancer patients, making more money with each dose of the toxic chemical. But maybe that doesn’t affect their judgement when it comes to patient care.

Maybe it’s all a coincidence. Maybe there’s no conflict of interest within the FDA. Maybe Sanofi is a great company that’s just trying to help patients. Maybe it’s the result of an innocent mistake that our shelves are filled with deadly drugs that cause cancer. Maybe the people who are calling foul are just crazy conspiracy theorists. Maybe a little bit of cancer isn’t a big deal so long as you get heartburn relief.

But I don’t buy it for a second…