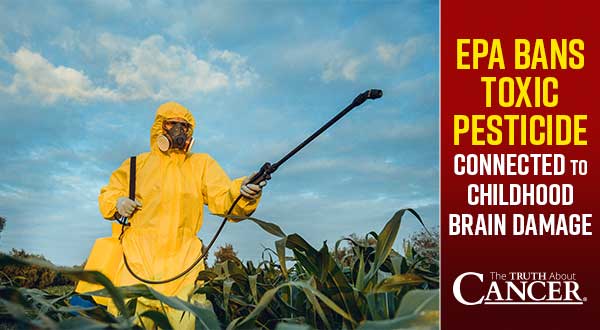 The U.S. Environmental Protection Agency (EPA) has finally moved to ban the use of chlorpyrifos, a toxic insecticide linked to brain damage in children. The ban is expected to take effect early next year, and will apply to all food uses. It’s a big win for the supporters of natural health and organic produce, and could mark a shift in the way our government regulates chemical use.

Here’s what you need to know.

Chlorpyrifos has been registered for use in the U.S. since the 1960s as an agricultural pesticide. It’s estimated between 5 and 8 million pounds of the chemical are used on U.S. soil every year! Part of a family of nerve agents developed during World War II, chlorpyrifos is a potent neurotoxin that research shows can permanently and irreversibly harm the developing brains of children.

Exposure in early life to chlorpyrifos — on favorite fruits like apples and berries, via drinking water contaminated by agricultural runoff, and through drifting air from nearby farm fields — can increase the risk of developmental delays, learning disabilities, lower IQ scores, and ADHD. It can also lead to respiratory problems and diminished lung function.

In 1989, the Natural Resources Defense Council (NRDC) released a report called Intolerable Risk (which you can read here). The groundbreaking report highlighted the risks that children face every time they eat their fruits and vegetables. The report states:

These staples of children’s diets routinely, and lawfully, contain dangerous amounts of pesticides, which pose an increased risk of cancer, neurobehavioral damage, and other health problems. Although solutions are at hand, little is being done by the government to protect children from the intolerable risk to their health posed by pesticide residues in food.”

The study listed chlorpyrifos (also known as lorsban) as a major health risk, citing potential damage to the nervous system. The NRDC also raised concerns that chlorpyrifos could cause chronic toxicity, permanent and transmissible genetic mutation, and cancer (although they did not have the studies available in the 80s to fully support the claims).

Chlorpyrifos was also among the chemicals that presented the greatest source of exposure to preschoolers from consumption of 27 types of fruits and vegetables. The report estimated that the average preschool-aged child was exposed to 753% more chlorpyrifos than the acceptable daily limit!

Some countries and several states, including California, have moved in recent years to ban or limit use of chlorpyrifos, citing the threat to public health. The EPA actually proposed ending its use in 2015, but the decision was later reversed.

Dow chemical (the original producer of chlorpyrifos) aggressively fought the EPA’s proposal 6 years ago, and still maintains that it “stands by the safety of the product and its value for the grower community.”

*Note: Dow Chemical and DuPont merged in 2017 and then split into 3 different companies. Corteva Agriscience is the agricultural spinoff company that continued to produce the insecticide until recently.

Thirty-two years later, after dozens of scientific studies and relentless pressure from NRDC and other public health, farmworker, and community advocacy groups, the EPA finally banned chlorpyrifos, one of the most toxic and widely used pesticides on the market.

But the fact that such a damaging chemical could stay on the market for such a long time – despite overwhelming evidence of its dangers – is troubling to say the least. In a 2-1 majority this past April, the Ninth Circuit panel held that the EPA delayed in making a decision on chlorpyrifos, which studies have shown to be harmful to the health of infants and developing children.

“The EPA has spent more than a decade assembling a record of chlorpyrifos’s ill effects and has repeatedly determined, based on that record, that it cannot conclude, to the statutorily required standard of reasonable certainty, that the present tolerances are causing no harm,” wrote District Judge Jed Rakoff. “Yet, rather than ban the pesticide or reduce the tolerances to levels that the EPA can find are reasonably certain to cause no harm, the EPA has sought to evade, through one delaying tactic after another, its plain statutory duties.”

And the truth is that the EPA, nearly since its inception, has been colluding with the very companies it was designed to regulate. In 1965 – 5 years before the EPA was created – four rival chemical companies attended a closed meeting at the Dow Chemical Company’s headquarters to discuss dioxin, a toxic contaminant found in a widely used herbicide that the companies manufactured.

One of those attending wrote in a memorandum that Dow did not want its findings about dioxin made public because the situation might ‘’explode’’ and generate a new wave of government regulation for the chemical industry.

During the Reagan administration, agency officials in Chicago told the Investigations Subcommittee of the House Committee on Energy and Commerce that their superiors in Washington ordered them to change an important report on dioxin to comply with the wishes of Dow Chemical.

The key deletion from the report was the following central conclusion about Dow’s Midland plant: ‘’Dow’s discharge represented the major source, if not the only source, of TCDD contamination found in the Tittabawassse and Saginaw Rivers and Saginaw Bay in Michigan.’’

President Reagan tried to downplay the issue, blaming the media for sensationalizing the story. But a congressional investigation exposed the extent of Dow Chemical’s influence over the EPA, leading to the dismissal of EPA Administrator Anne McGill Burford and 12 other officials.

The EPA ban is a good first step. Lawsuits to hold these corrupt companies accountable for their willful harming of children is another important step. But getting the corporate money OUT of politics and OUT of regulatory bodies is the most important step… and one we’ll never make without strong, honest, and independent leadership.