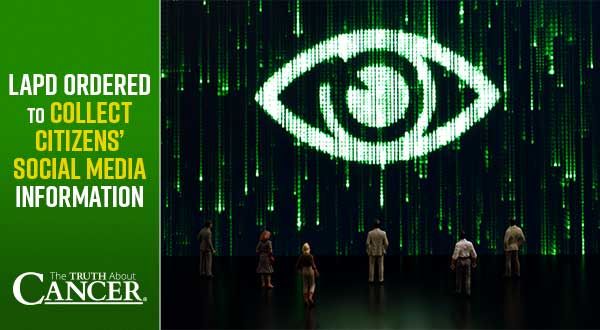 According to documents obtained by the Brennan Center for Justice, The Los Angeles Police Department is now ordered to collect social media information from anyone with whom they interact… even if that person is not arrested or suspected of committing a crime. Internal records show that officers are tracking people and their connections with little guidance or oversight to protect privacy and First Amendment rights.

Copies of the “field interview cards” that police complete when they question civilians reveal that LAPD officers are instructed to record a civilian’s Facebook, Instagram, Twitter and other social media accounts, alongside basic biographical information. An internal memo further shows that the police chief, Michel Moore, told employees that it was critical to collect the data for use in “investigations, arrests, and prosecutions”, and warned that supervisors would review cards to ensure they were complete. 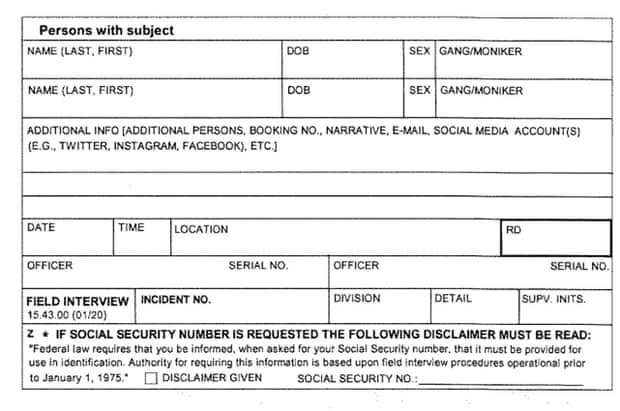 Oftentimes this surveillance can expand to your contacts, friends, or followers, creating an even larger privacy concern. “It allows for a huge expansion of network surveillance,” said Rachel Levinson-Waldman, a deputy director at the Brennan Center, noting how police and prosecutors have previously used Facebook photos and “likes” to make dubious or false allegations of criminal gang activity.

A memo from October 2018 outlines procedures to create an official LAPD social media account and policies that govern officer conduct on social media for official business and personal use. These guidelines do not apply to approved undercover activity on social media.

A 2015 “Social Media User’s Guide” shows that the department encourages social media monitoring but has issued little guidance and imposed minimal oversight over officers’ surveillance on social media platforms. The department allows officers to create a “Fictitious Online Persona” and use the personas for numerous purposes, including “online investigative activity” and “listening.”

This is the digital equivalent of “stop and frisk” laws and violate our rights as sovereign citizens. Hamid Khan of the Stop LAPD Spying Coalition noted that the LAPD also shares data with federal law enforcement agencies through “fusion centers”, and has previously used “predictive policing” technologies that rely on data collected by officers in the field and which can criminalize communities of color.

“This is happening with the clear goal of surveillance,” says Kahn, noting that the LAPD has allowed officers to pose undercover to investigate groups, meaning officers can create fake social media accounts to infiltrate groups.

Few limitations offset this broad authority: officers need not document the searches they conduct, their purpose, or the justification. They are not required to seek supervisory approval, and the guide offers no standards for the types of cases that warrant social media surveillance. While officers are instructed not to conduct social media surveillance for personal, illicit, or illegal purposes, they seem otherwise to have complete discretion over whom to surveil, how broadly to track their online activity, and how long to monitor them.

This is unchecked tyranny by “Big Brother.”

The copies of the cards obtained by the Brennan Center also revealed that police are instructed to ask civilians for their social security numbers and are advised to tell interviewees that “it must be provided” under federal law. Kathleen Kim, a Loyola law professor and immigrants’ rights expert, who previously served on the LA police commission, said she was not aware of any law requiring individuals to disclose social security numbers to local police.

In the 2021 budget, the LAPD allotted $73,000 to purchase Media Sonar software to help the department “address a potential threat or incident before its occurrence”. Records show that the LAPD has requested federal funding for Media Sonar for “terrorism prevention.”

If that sounds familiar, it’s probably because critical thinkers like us are now at the top of the terrorist watch list. Some of the things that indicate a risk for domestic terrorism include opposition to COVID-related restrictions, questions about the integrity of U.S. elections, and “conspiracy theories” that question the integrity of government, pharmaceutical, and tech industries.

If you question the U.S. government (or, more specifically, the party majority that happens to be in office), you are a “top priority” threat against the nation. And with social media censorship at an all-time high, it’s no wonder the LAPD and federal government are so interested in tracking our activity online.

With police officers now equipped to rummage through our personal information, how long before people are arrested as “terrorist threats” for simply exercising their First Amendment rights to question the corrupt system under which we live?